French musician-turned-auteur Quentin Dupieux, who made his name with sentient car tire curio Rubber, is back with Deerskin, another violent enigma centering on an inanimate object. This time around, the focus is on a fetching deerskin jacket that becomes the obsession of middle-aged sad sack Georges (Jean Dujardin). Spending the rest of his savings on the jacket – a fringed Western number – and an old digital video camera, Georges pitches up in a small French town posing as a filmmaker, enlisting local bartender Denise (Adele Haenel) as his editor/producer.

Under the guise of a film production and spurred on by hallucinatory conversations with his beloved jacket, Georges goes on a quest to rid the world of all other jackets. This begins by tricking strangers into surrendering their jackets on camera before developing into a full on, fashion-fueled killing spree. While this might sound like the stuff of an over-the-top, madcap horror comedy, Dupieux’s approach is far more minimalist and deadpan. The result is a darkly playful stunt of a film built entirely around one joke, like a 78-minute comedy skit, albeit a funny one with a killer punchline.

Playing a character with no backstory or motivation, The Artist Oscar-winner Dujardin delivers a masterclass in understated comedy, his deadpan delivery turning the simplest of lines into a laugh out loud moment. To watch him boasting about his “killer style” or utter a single, delighted “fuck” anytime he sees a new item of deerskin clothing is hysterical, no matter how many times the film goes back to the same gags. Dujardin is a charismatic and charming leading man, but here he dials that back, fully committing to his unhinged character and Dupieux’s oddball vision.

What that vision actually is, is open to interpretation however. You could read Deerskin as a warped exploration of waning masculinity, a takedown of the image-obsessed or perhaps even a satire on the follies of independent filmmaking. You could also find yourself wondering just what the point of it all was. Whether Dupieux had something deeper on his mind, or just set out to craft another darkly quirky little curiosity, the result is still a unique experience that’s funny and engaging in its own weird way. 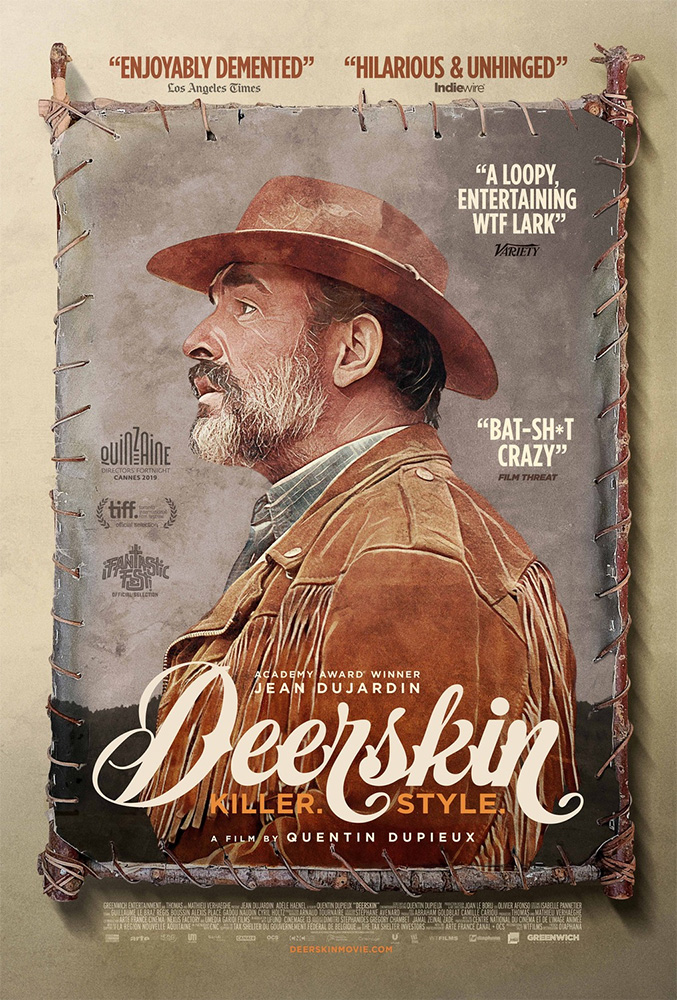