Though it’s eventual worldwide gross ended up over double the budget, it’s hard to imagine anyone who desperately wanted to see a sequel to Mark Steven Johnson’s Ghost Rider. Anyone other than Nicolas Cage that is and now the well known comic book fanatic has orchestrated Ghost Rider: Spirit of Vengeance. Part sequel, part reboot, the film doesn’t acknowledge the previous movie and makes a few changes to the origin story that’s briefly covered by some stylish comic book scenes here. But the question is: is it any better? The answer would be yes, but not by much…

This film picks up five years after the last one with Johnny Blaze (Cage) hiding out in Eastern Europe. He is approached by a monk named Moreau (Idris Elba) who tells him that the devil has taken human form as Roarke (Ciaran Hinds) and is out to locate a young boy (Fergus Riordan) and his mother (Violante Placido). The boy, Danny, is believed to be the key to bringing about the end of days or whatever nefarious plan Roarke has in store.

The slick comic book scenes fill us in on Blaze’s past. In order to save his father, he signed a deal with the devil that left him possessed by a demon called The Rider who is hell bent on punishing sinners and eating their souls. Whenever in the presence of true evil, The Rider takes over and Blaze’s head turns into a flaming skull. He makes a deal with Moreau that he will help deliver the boy to his church sect in exchange for an exorcism to rid him of The Rider once and for all.

Helmed by Crank directors Neveldine & Taylor, you would expect some of the mayhem and silliness that made that film so fun but sadly the flashes of their madcap sensibilities are few and far between here. Thankfully Nicolas Cage is on hand to deliver a wide-eyed, screaming performance that proves to be the film’s high point and surely a staple of YouTube videos for years to come. Elba and Hinds, far more used to subtlety and nuance, try their best to match their wild leading man, chewing scenery left, right and centre but can’t quite keep up.

Neveldine & Taylor mostly do a decent job of keeping the film moving but there are still some sections that lag which is surprising for a 90 minute action film. The film is at it’s most watchable when Cage is flipping out or destroying people as Ghost Rider and then massively dips when the focus is on the generic plot or any of the other characters. The film’s villains in particular lack any real threat, with Roarke not offering any physical confrontation and the secondary villain Blackout (Johnny Whitworth) proving an interesting side character but ultimately paper thin.

So while the film is an improvement on the 2007 version and quite fun in places, it’s still not a particularly good film by any means. That doesn’t mean it’s entirely without merits though, Cage is fun to watch and some of the action scenes are well handled but it’s ultimately bogged down by a bland plot and any real excitement. 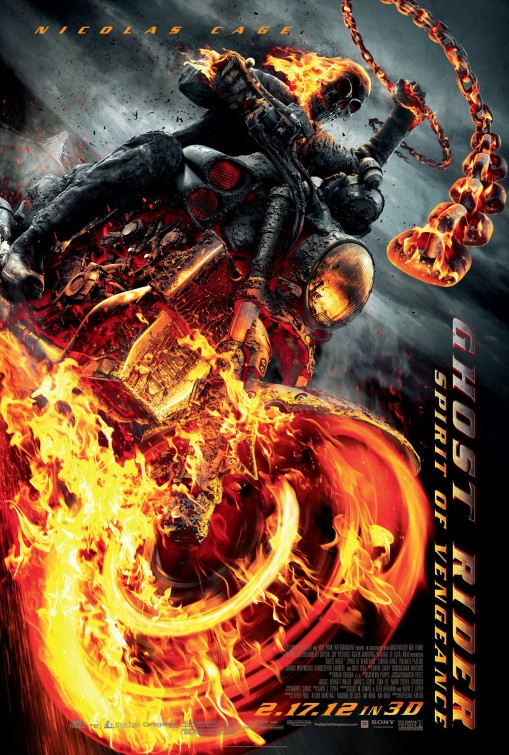