In his 2014 breakout film Blue Ruin, writer-director Jeremy Saulnier put a regular guy in the middle of a revenge thriller with all the clumsy violence and what-would-you-do tension that goes along with that. With his new film Green Room, Saulnier again puts regular people in a violent genre scenario and imagines how they might cope, pitting a young punk band against a gang of neo-Nazis.

The band are The Ain’t Rights – played by Anton Yelchin, Alia Shawkat, Joe Cole and Callum Turner – and they’re in the midst of a hardscrabble tour, travelling the country in their beat-up camper van and playing dive bars. The tour hasn’t gone quite as planned and the band are ready to cut their losses but first, they need to scrape together enough cash to get home. They get offered a gig at a skinhead bar on the outskirts of Portland. “They’re alright, just don’t talk politics”, the band are told.

This build up is all handled quickly and economically by Saulnier, avoiding any heavy exposition or obvious backstories for the band. We get to know them from the way they behave and how they interact with each other, with Saulnier dropping in important bits of information without any heavy sign-posting. When one of the band, after almost starting a fight, is jokingly called ‘Jiu Jitsu’, we learn he has some kind of interest or background in Jiu Jitsu or cage fighting and of course, that comes up again later. That’s all we need but lesser filmmakers wouldn’t trust the audience to keep up and need to spoon-fed the band’s individual backstories.

When the band make it to the venue, things are initially fine. The skinheads are organised and the bar manager Gabe (Blue Ruin’s Macon Blair, excellent) is pleasant. Though the band open their set with a cheeky rendition of The Dead Kennedys ‘Nazi Punks Fuck Off’ that doesn’t go down too well, the gig goes well enough and the band are ready to pack and leave when they stumble upon something in the titular green room that they shouldn’t have seen. Gabe and the rest of the skinheads lock the band, along with local punk Amber (Imogen Poots), in the room until they can sort out the situation.

From this point on, Saulnier continually ratchets up the tension – and eventually the violence – as things go from bad to worse for the band. What’s impressive and ultimately elevates the film above the standard genre thriller is the way it stays grounded in humanity on both sides of the conflict. The neo-Nazis aren’t exactly nice guys and the way they plan to resolve this whole situation involves knives, guns and vicious attack dogs but they aren’t just sadistic killers either. Ruthless, yes, but not sadistic. They didn’t set out to kill anyone – well, no-one in the band anyway – and their goal now is to deal with the situation they find themselves in as quickly as possible.

The Nazis are led by the cool, calculating Darcy (Patrick Stewart) who isn’t too impressed that things have been allowed to escalate so quickly in his establishment and is keen to get the band off-site before any police arrive. Stewart is playing against type for sure but this isn’t the big, theatrical villain role many might have expected or even hoped for. Instead, Darcy is a practical leader and Stewart imbues him with quiet authority that only occasionally brims over into violence.

The fact that the villains here are so grounded also makes them all the more terrifying. Places and people like this exist so this horrific scenario feels all too plausible and, as with Blue Ruin, a large part of the visceral impact comes from envisaging yourself in a similar position and working out what you would do. The band are essentially regular kids who are attacked and slowly picked off in increasingly gruesome ways, which drives them to commit extreme, hideous acts of violence that they never would have thought themselves capable of. Whether they make it out of there alive or not, their life will never be the same again.

Saulnier also seems to be saying something about identity and image here, with these kids who play in a punk band and profess to being ‘hardcore’ eventually having that front stripped down when they’re confronted with a group who are really hardcore. In a recurring joke throughout the film, the band members all name their ultimate ‘desert island’ bands, initially they all pick punk bands but later in the film, when they’re facing death, the façade is gone and they pick their actual favourite bands: Prince, Madonna, Simon & Garfunkel.

With Green Room, Saulnier has built on the incredible promise he showed with Blue Ruin and delivered a lean and tightly-wound thriller with a rich vein of dark humour throughout. When it gets nasty, it gets very nasty but is always grounded by its well-written and brilliantly performed characters, both good and bad. The end result is a cinematic experience that’s hard to shake. 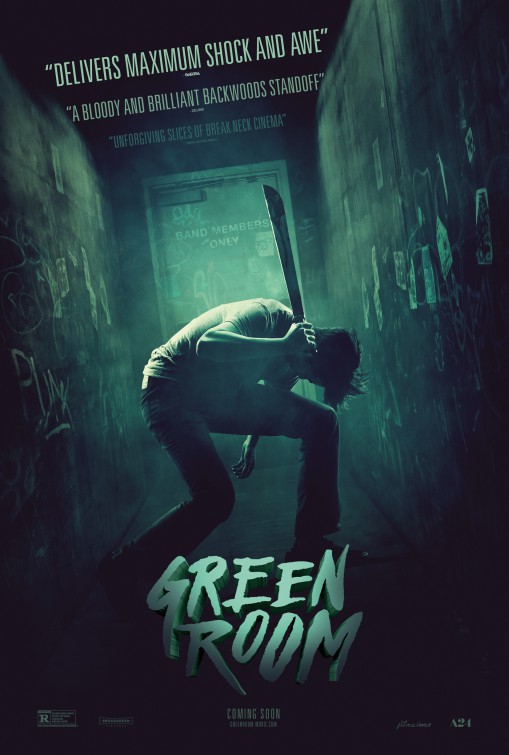