Hollywood satire Hail, Caesar! is a rare Coen brothers film that could almost be described as ‘feel good’. As much as it deals with faith and politics to some degree – and no doubt you could take those threads and pull them pretty far, as with any Coens film – this is more style than it is substance, a brief and snappy comedy set in the studio era of Hollywood.

The lead is studio exec Eddie Mannix (Josh Brolin) who spends most of his time putting out fires for the studio, whether that be getting his stars back on set after a bender, negotiating stories with the gossip rags or ensuring there’s no offensive material in his big budget religious epic, Hail, Caesar!. The star of the film-within-the-film is Baird Whitlock (George Clooney), a cad known for disappearing into a haze of booze and women for a couple of days at a time.

But when Whitlock disappears this time, it’s at the hands of a group of Hollywood communists who plan to use him to get ransom money from the studio. Whitlock never seems too perturbed by it though, in fact he doesn’t even realise at first and actually begins to buy into their ideology. He spends most of the film lounging around the communists’ beach house in his full Roman costume, always with a drink in hand.

While trying to deal with the ransom situation, Mannix also has a host of other issues around town to fix, which gives the Coens the chance to play around with classic genres and introduce a raft of cameos. Scarlett Johansson pops up as a starlet with a chequered past and another secret she needs covered up while she squeezes into a “fish ass” to play a mermaid in a synchronised swimming number. Channing Tatum gets to show off his impressive dancing skills and a surprisingly good singing voice as a closeted gay movie star filming a musical about sailors, fittingly called ‘No Dames’.

The best of these sequences involves rising star Hobie Doyle (Alden Ehrenreich), a former stuntman who transitioned into Westerns but hasn’t quite mastered the art of speaking on camera yet. When the lead of a romantic drama drops out, Doyle is sent to work on the film with English director Laurence Laurentz (Ralph Fiennes) who has to try and coax a passable performance from this stiff cowboy. This is the film’s funniest scene, thanks mainly to Ehrenreich, whose physicality and aw-shucks earnestness is hilarious, especially opposite the bemused and increasingly aggravated Fiennes.

But Ehrenreich shines throughout. He has been solid in fairly unremarkable roles in the past (Stoker, Beautiful Creatures) but he is a revelation here, completely nailing the part of a good-natured but slightly dim kid thrust into stardom. He doesn’t quite know how to act and isn’t particularly media savvy but he’s a good kid and as we see at one of his movie premieres where he’s paired with a hot young starlet, he’s a gentleman who can be pretty charming with a spaghetti lasso.

Though Mannix is the connective tissue between all of these scenes, and other characters cross paths in various ways, the film does at times feel like a loose collection of scenes and sketches and is fairly thin on plot. It is however part loving tribute to the Hollywood that the Coens grew up on but doesn’t shy away from skewering the seedier side of the town – one starlet needs to pretend to have adopted her own baby – and the fears of the time, particularly surrounding communism and Soviet spies who have infiltrated the studios.

It speaks to the quality of the Coen brothers’ work that a film this zany and entertaining feels like a minor entry into their overall filmography. There may not be much material for Coen enthusiasts to pore over for years but Hail, Caesar! is a delightfully breezy and at times endearingly silly showbiz satire, and sometimes that’s enough. 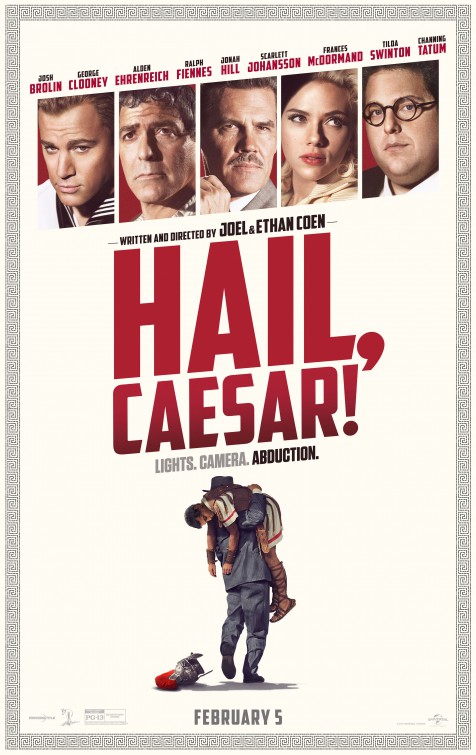