Elevator pitches don’t come much catchier than the premise of Christopher Landon’s teen slasher Happy Death Day: it’s Groundhog Day, but with murder! Yep, it tells the story of a sorority girl, played by Jessica Rothe, who has to relive the day of her grisly murder over and over again, using the knowledge she gains every day to help her figure out who her killer is and survive until tomorrow. Though obviously ridiculous, it’s nonetheless an irresistible set-up that Landon and screenwriter Scott Lobdell capitalise on with wit and inventiveness.

Tree (Rothe) wakes up on her birthday hungover in a dorm room. It looks like she’s had a drunken one night stand with nice guy Carter (Israel Broussard), though she can’t remember it. She rushes out of there and goes about an otherwise pretty typical day: she snubs her preppy roommate, rebuffs the advances of a frat bro, ditches class to meet the married professor she’s sleeping with and heads out for another night on the tiles. Before she can make it to the party though, she’s brutally murdered by an unknown killer, his (or her) face hidden behind a baby mask.

After her death, Tree…wakes up on her birthday hungover in a dorm room. The film applies the same rules as Groundhog Day, with Tree aware that she’s repeating the same day over and over again but everyone else resetting. The film wisely never explains how or why this phenomenon is occurring – that would’ve killed it faster than a knife-wielding psycho in a baby mask. But it does make it pretty clear what Tree has to do to escape this never-ending cycle: survive. To do that, she has to suss out who is killing her and why, and the film sets up plenty of jilted lovers, jealous wives and sorority rivals who have a plausible enough motive to want Tree out of the picture.

Though Tree’s murder is at the centre of everything in Happy Death Day, the film actually functions more as a teen comedy than an outright slasher flick. There is some level of tension involved in some of the kills but more often than not, they are quick and played for laughs, particularly in a delightfully demented montage of Tree trying – and failing, miserably – to track down her killer. Naturally, as the film moves towards an admittedly disappointing denouement that doesn’t particularly add up, the humour dies out and the focus is more on hacking, slashing and generic ‘final girl’ set pieces.

This final third actually does a disservice to the film that comes before it, veering toward a sadly conventional ending when the rest of the film manages to be inventive and actually slightly subversive. Tree in particular is a welcome deviation from the typical good girl that anchors a slasher film; far from being the virginal, Sydney Prescott-esque heroine, Tree has an edge to her. She parties hard, sleeps around and is kind of a bully, doling out snark like it’s going out of fashion and leaving behind a trail of people with an axe to grind. But over the course of this one repeating day, the script and Rothe’s canny performance begin to reveal more and more shades to Tree’s character; by the time the film is over, there’s a sense that she has actually grown as a person and it all feels earned.

Horror fans might balk at the lack of gore but Happy Death Day is nonetheless a compelling and fun take on both the slasher genre and the repeating-day narrative. It approaches both with sufficient wit and style, weaving its horror elements seamlessly into a college comedy. Rothe seems like a star in the waiting, delivering a lead character that’s a breath of fresh air for the genre, in a film that so often transcends those same boundaries, even if it ultimately succumbs to something more generic. 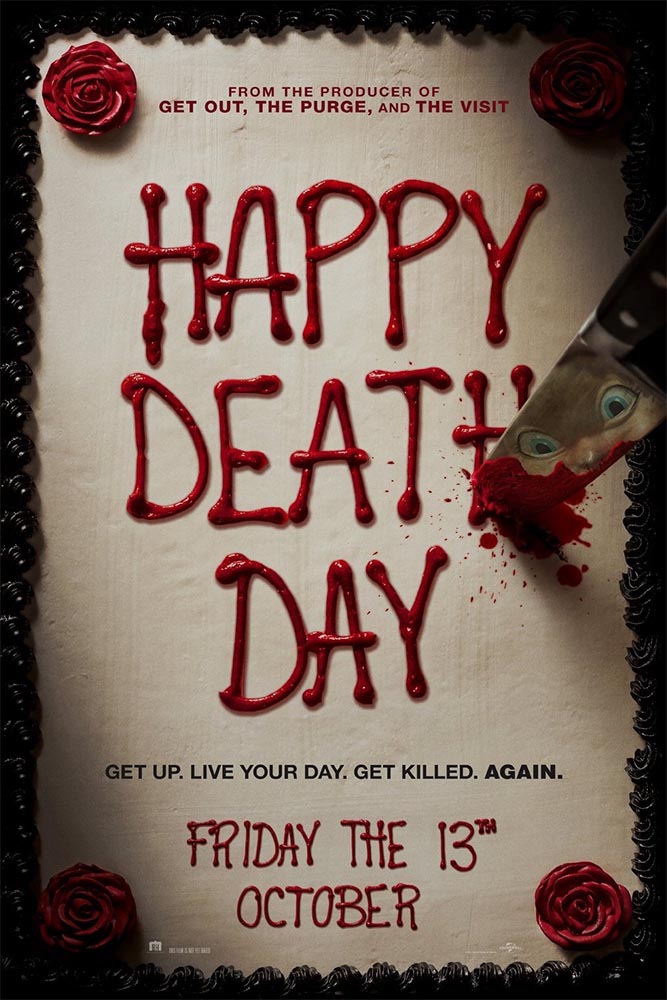