Marketed as another The Girl With The Dragon Tattoo-style Scandinavian thriller, Headhunters will inevitably ride on the wave of popularity still lingering from those films but will no doubt surprise many in just how different it is. Based on Norwegian author Jo Nesbo’s 2008 novel Hodejegerne, director Morten Tyldum’s film plays more like a Coen Brothers farce than the slick techno-thriller atmosphere of The Millenium Trilogy.

A brilliant opening tells us all we need to know about Roger Brown (Aksel Hennie), a corporate headhunter with short man syndrome who overcompensates with a knockout wife, luxury apartment and massive bouffant haircut. With bankruptcy looming and his salary not enough to maintain the kind of lifestyle he’s cultivated, Roger moonlights as an art thief to keep himself afloat.

A seemingly chance meeting with ex-army tracker and corporate giant Clas Greve (Nikolaj Coster-Waldau) sends Roger’s house of cards tumbling down as the pair end up in a vicious game of cat and mouse that has massive personal and professional consequences for all involved.

The first half hour of Lars Gudmestad and Ulf Ryburg’s script is so effective in establishing Roger as a putrid, shallow creep with a Napoleon complex that when his downfall comes via a sequence of events, each one more ridiculous than the last, it’s hard not to enjoy it. However, by the time he’s been shot, stabbed, savaged by a dog, flung off a cliff and, most ludicrous of all, hidden fully submerged in a particularly full outdoor latrine, we actually begin to root for him. Part of that credit has to go to Hennie’s excellent performance, full of bug eyed nervous energy and wry wit. On the flipside of that is Coster-Waldau’s Clas. Tall, handsome and successful, he is precisely everything Roger is not which makes him the perfect nemesis.

The film’s plot is completely insane but Tyldum shows a knack for strong, clear storytelling and keeps everything moving at a quick enough pace to ensure the manic thrills and brutal violence never outstay their welcome. The thick strand of jet black humour running through the core of the film makes for an odd tone but is ultimately what separates Headhunters from your average crime thrillers. Hennie’s impressive leading turn is certain to catapult him straight into some Euro-villain roles in Hollywood and no doubt the film itself isn’t far from it’s own Hollywood reboot but it’ll be tough to recapture this madcap mix of Hollywood gloss and Scandinavian sensibilities that make for a unique and immensely entertaining crime flick. 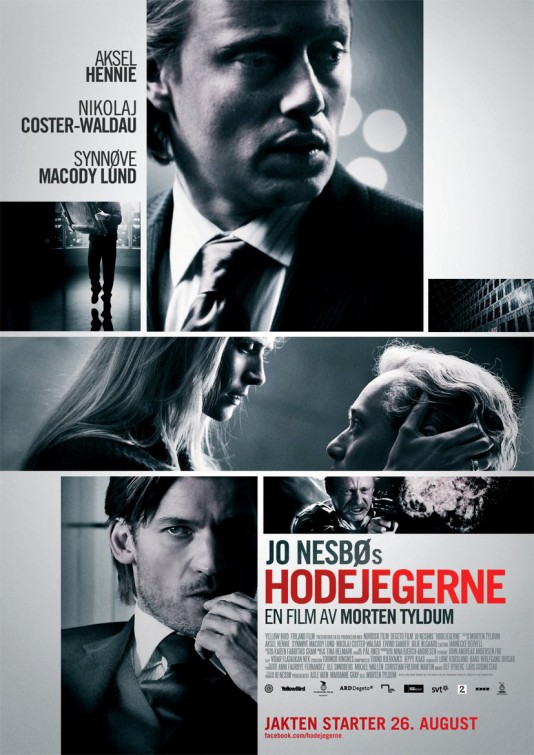