Hector and the Search for Happiness, a whimsical travelogue based on French self-help author Francois Lelord’s novel of the same name, is Simon Pegg’s latest stab at being a conventional leading man. Much like other efforts like How to Lose Friends and Alienate People and Run Fatboy Run, Hector is another big misstep for an actor who should be so likeable but more often than not just comes across as smug.

Pegg is yet to find a leading role outside of his work with Edgar Wright – roles written with him in mind– that can really channel his particular charms. As the titular Hector, Pegg is almost unbearable as an irritating man-child with a big time sense of entitlement. Despite leading a perfect life where he’s beloved by his psychiatry patients and doted on by his beautiful girlfriend Clara (Rosamund Pike) in his lavish London apartment, Hector isn’t happy. In order to help himself and his patients, Hector takes off on a journey around the world to discover the secret of a happy life.

Essentially, Hector is bored and wants to sow his wild oats abroad, something Clara is bafflingly okay with and gives him permission to do whatever he wants to do. It’s a sad state of affairs watching an actress as good as Pike relegated to playing a depressing misogynist fantasy like Clara, a woman not only content to make her boyfriend packed lunches, tie his tie and send him off to work on a daily basis, but let him saunter around the globe for as long as he likes, sleeping with whoever he likes along the way.

Hector doesn’t waste much time either. After a chance encounter with a wealthy businessman (Stellan Skarsgard) on a flight to China, he spends his first night partying in Shanghai and goes home with a pretty young student who, in a staggeringly predictable twist, is actually a prostitute. Why the businessman felt compelled to splash thousands ensuring Hector had a good time is a mystery considering he spent the whole flight trying to ignore him.

On his trip to Africa – just ‘Africa’, not any specific country – Hector quickly makes friends again, this time with a local drug lord (Jean Reno) and a kindly woman who invites him round for dinner with her family where naturally everyone just worships Hector, including the woman’s beautiful cousin who is quick to try and get irresistible old Hector into bed.

The journey comes to a merciful close in Los Angeles, where Hector meets up with old flame Agnes (Toni Collette), the only character in this whole turgid affair who actually calls out Hector for being an irritating child who needs to move on with his life. It’s hard not to cheer when Agnes verbally tears strips off Hector but within minutes, everything is hunky dory again and she takes Hector to see renowned scientist Professor Coreman (Christopher Plummer), leading to a finale so terrible that even the past two hours of utter dreck won’t have suitably prepared you for it.

It wouldn’t be so bad if this flimsy, middle-aged search for enlightenment had some laughs. Even one laugh would help, but no, there’s nothing even remotely funny here and the film is completely devoid of snap thanks to a saggy runtime that kills any momentum director Peter Chelsom can muster. Chelsom is a decent enough pair of hands behind the camera and everything looks glossy enough but working with a script as dumb, smug, racially patronising and casually sexist as this, there isn’t much he can do but turn in a film that plays like The Secret Life of Walter Mitty’s vile step-brother.

Where that film was funny, warm and poignant with an appealing Ben Stiller in the lead role, Hector and the Search for Happiness is a nightmarish slog through trite self-help clichés with a self-satisfied, insincere performance from Pegg at its centre. 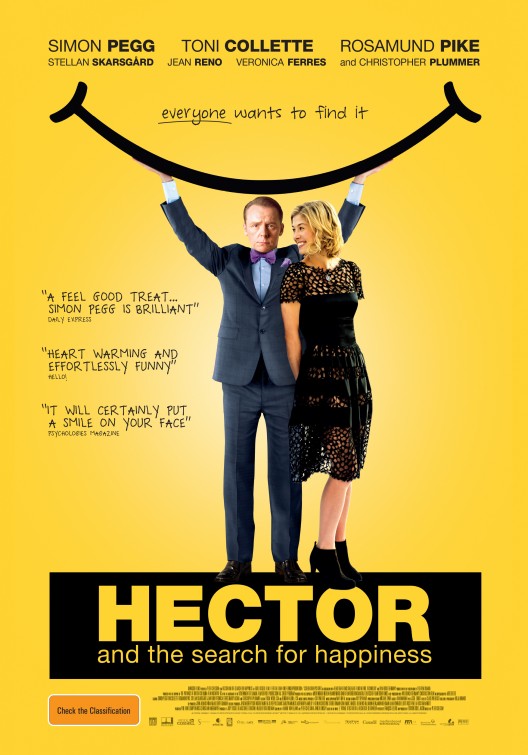