After the success of Judd Apatow and Todd Phillips, the R-rated comedy has made a massive comeback in recent years and that trend continues with Seth Gordon’s Horrible Bosses, a filthy laugh fest that all 9-5ers will sorely relate to.

The horrible bosses in question are played with relish by Kevin Spacey, Colin Farrell and Jennifer Aniston, all of whom are exceedingly horrible in different ways. Spacey’s Dave Harken is the head of a financial firm who promises middle manager Nick (Bateman) a big promotion only to snatch it away from him at the last second to award it to himself, abusing Nick along the way. Farrell is almost unrecognisable under a beer gut and combover as Bobby Pellitt, a spoiled coke fiend who inherits his beloved father’s business, upsetting his father’s protégée Kurt (Sudeikis). Aniston portrays Dr Julia Harris, a dentist who makes a habit of sexually abusing Dale (Day), forcing him into playing along with her fantasies with the threat of telling his fiancé.

Meeting over drinks, the trio of beleaguered employees decide enough is enough and they are going to murder their horrible bosses. After a failed encounter with a hitman (a bizarre cameo from Ioan Gruffud) they hire ‘murder consultant’ Motherfucker Jones (Jamie Foxx, stealing the entire movie) and devise a devilish plan: they will kill each other’s bosses.

The three leads embark on their murderous adventures, running into various mishaps involving allergy comas, sneaky cats, piles of cocaine and an extremely helpful sat nav system. Played with considerable charm by Bateman, Sudeikis and Day, the three leads all have their share of moments. Played with his trademark dry wit, Bateman once again elevates his character to more than a mere straight man. Taking another step from the TV ranks of Saturday Night Live into the big leagues, Sudeikis flourishes womaniser Kurt. Charlie Day, also a TV star from It’s Always Sunny…, has the juiciest part to play and milks most of the laughs as the highly strung Kurt. Each man brings with them the personas they’ve cultivated on their respective TV shows and bring them together to great effect, working with a great chemistry and sharp comic timing.

It is of course those horrible bosses who make the movie though, each actor clearly having a blast as they bring such wicked humour to their characters. Spacey can do the corporate asshole part in his sleep and is particularly slimy here. Farrell’s kung fu loving coke addict doesn’t get enough screen time and post-credits outtakes suggest a lot of his good material didn’t make the final cut. It’s Aniston who is the real revelation here though, playing against type as the foul mouthed sex addict, showing Cameron Diaz how it’s done after this summer’s putrid Bad Teacher.

Though it doesn’t quite take its killer premise to the shadowy depths that it perhaps could have, Horrible Bosses is a funny, often hilarious, R rated comedy with laughs to be had from foul mouthed one liners and ridiculous slap stick. The central theme is also a fantasy most office workers the world over can certainly relate to. All the actors involved shine and this should provide a breakthrough into the comedy big time for Sudeikis and Day as well as the possibility of more bad girl roles for Aniston and broad comedy for Farrell. One of the year’s best comedies. 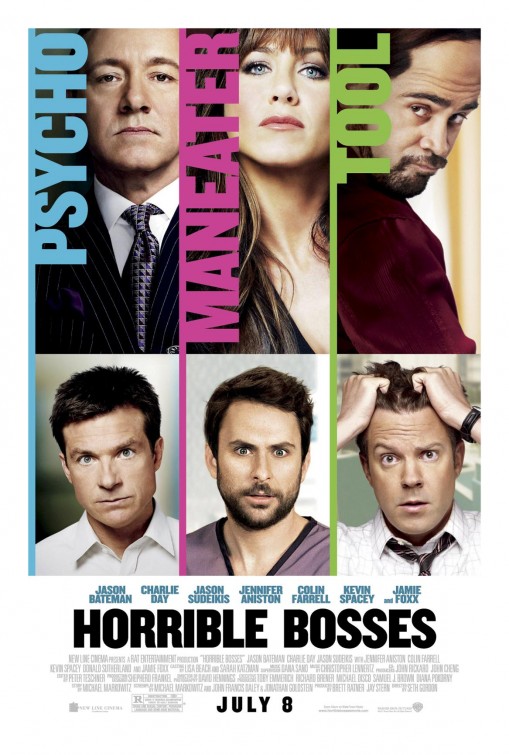