Christian Ditter’s How to Be Single is a romantic comedy that, like almost all romantic comedies, is loaded with clichés and archetypal characters, following its characters around a fantasy version of New York City that’s all shabby chic apartments, cool bars and implausibly amazing parties. But like the most successful romantic comedies, it’s funny enough and charming enough and so well-performed that it’s impossible not to be won over by it.

The film focuses on the intermingling love lives of a group of New York singletons, all looking for different things in life. The lead is Alice (Dakota Johnson), who moves to New York to get a break from her long term boyfriend and “find herself”. This type of character could be – and has been in the past – grating but Johnson is completely beguiling, putting her wide-eyed naiveté and superb comic timing to great use.

On the first day at her new job, Alice meets Robin (Rebel Wilson), a bawdy party girl who takes Alice out on the town and initiates her in the ways of NYC single life. It’s a typically big performance from Wilson and Ditter lets her off the leash, so we get numerous bizarre non-sequiturs and references, most of which actually land. She also gets the opportunity to show a bit of heart beneath all of the dick jokes and prat falls, something no film has afforded her yet.

A more stable influence on Alice is her older sister Meg (Leslie Mann), an obstetrician who is feeling the clock ticking on her chances of having a baby of her own. There’s a wonderful scene early on where Meg begrudgingly bonds with a patient’s baby and Mann is just fantastic, shifting the tone from humourous to tenderly poignant and selling us on this character’s inner life right away,elevating her arc above the standard trope.

Mostly disconnected from this trio is Lucy (Alison Brie), a peppy and upbeat overthinker who hangs out in the bar below her apartment, leaching the free internet to maintain her array of online dating profiles. She’s worked up a formula for dating, using stats and algorithms to work out the best ways to meet her potential soulmate but hasn’t had much luck yet.

Dipping in and out of the lives of these women is a series of guys, some of whom might be a good fit if not for certain obstacles getting in the way. Firstly, there’s Tom (Anders Holm), a charming bartender who has a rep for being the go-to guy for casual sex. Robin sets him up with Alice and they have a fling but Tom really has his eye on Lucy, who isn’t interested. Sensitive widower David (Damon Wayans Jr) likes Alice but worries about letting her get close to his daughter. Ken (Jake Lacy) is in love with Meg but she thinks he’s too young and worries about telling him that she’s already pregnant via IVF.

All of these characters and their situations are familiar from romcoms gone by and particularly New York single gal touchstones like Sex & the City and Friends but despite the obvious tropes, these characters are all extremely charming and well played so we want them to figure things out and end up with the right person. What keeps things interesting is that it’s not always clear who the right person is. Should Alice try to make things work with David or should she try to tame the womaniser Tom? What about her ex Josh, who seems like he might want her back? Alice’s eventual choice – and the decisions Meg and Lucy ultimately make – are refreshing and not quite what you might expect from a seemingly straightforward comedy like this.

Not everything here is quite as refreshing though and some attempts at creating rules or guidelines for drinking, dating and casual sex feel forced, with onscreen graphics that don’t quite fit with the film. The lengths Tom goes to remain single for example go a step too far towards clunky sitcom territory, going as far as to shut off his water so hungover girls have to leave to get a drink in the morning. Moments like that don’t ring true, which is disappointing when the film is capable of finding real insight elsewhere and has such a refreshing attitude towards sex and casual relationships.

Nonetheless, How to Be Single is a funny and charming romantic comedy that balances the moments of comedy and tenderness well, with a beguiling performance from Dakota Johnson at the centre of it all. 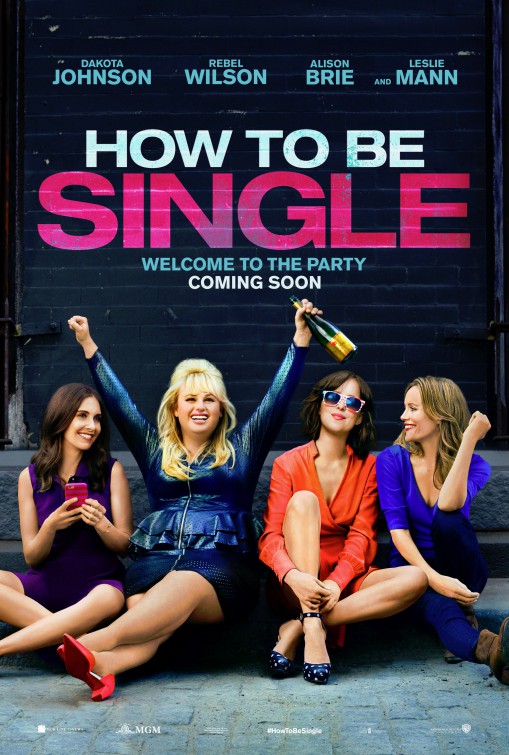