Even at eighty years-old, Ken Loach’s fire is still burning. Fifty years on from his acclaimed TV play Cathy Come Home, about the failings of the British welfare system, the legendary filmmaker returns to the subject to Palme D’or winning effect with I, Daniel Blake. Sadly, what he finds is that nothing has changed and there are still people living in abject poverty, on the brink of homelessness, thanks to a system designed to shame them and wear them down rather than help them.

Like many of Loach’s collaborations with screenwriter Paul Laverty – which encompasses almost everything the director has done for the past 20 years – I, Daniel Blake is a low-key story, told with humanity and warmth. At a time when tabloid newspapers and TV channels would rather blame, exploit and ridicule benefit claimants, Loach and Laverty are more interested in asking how a country like the UK could let down so many of its citizens through a sensitive and sympathetic tale of two people keeping other going even as the state continually lets them down.

Stand-up comedian Dave Johns gives a powerful performance as the titular Daniel Blake, a carpenter from Newcastle who is recovering from a heart attack. His doctors have told him he can’t risk returning to work but a government-appointed ‘healthcare professional’ has deemed him fit to work. Dan wants to appeal but ends up in a Kafkaesque nightmare of letters, phone calls, ‘decision makers’ and online forms that he can’t fill in. The benefits system is “digital by default” he’s told, which is no good to someone who has never used a computer before.

While at the job centre trying to straighten things out, he meets Katie (Hayley Squires, excellent), a single mum of two from London who has been relocated to Newcastle thanks to the unavailability of council housing back home. When she shows up a few minutes late for a job centre appointment, she receives a ‘sanction’, meaning she’ll lose out on benefits for at least a month. Dan sticks up for Katie and the two form a quick friendship, supporting each other in the face of financial issues and never-ending bureaucracy. For Dan, helping Katie fix up her house gives him a purpose, something he badly needs since having to leave work. Meanwhile Katie has had to leave her whole support network behind in London, so Dan’s friendship becomes invaluable.

At first, Dan – and by extension, the film – approaches the tedious form-filling and phone calls with wry humour but eventually it begins to wear him down. In fact, you get the sense it’s supposed to wear him down, to get him off the system and out of their hair, regardless of where he ends up. Punted from one department to another, forced to attend CV workshops and apply for jobs that he can’t take even if he got them – it all seems geared toward breaking someone down. The research into the whole system appears to have been meticulous and as such, all of these scenes ring all too true.

So too do the events in Katie’s life, particularly a scene in a food bank where the starvation finally gets the better of her and she breaks down. The scenes of crushing bureaucracy might make the blood boil but this scene is devastating, hammering home the harsh realities of life below the poverty line in a visceral way. This scene is likely to be remembered for years to come as a remarkable moment of cinema and should be required viewing for those responsible for a system that drives people to such dereliction or indeed anyone who thinks people on benefits get it too easy.

Later in the film, Katie’s story takes a disappointing turn towards cliché when she is offered a chance to make some money by a shady supermarket security guard. It’s a rare moment of contrivance in a film that strains for realism, from the non-professionals filling out the cast to Loach’s unfussy direction and muted colour palette. There are no histrionics or villainous pencil-pushers here; just a cold, detached system that treats people as nothing more than numbers. Loach puts a human face to those numbers and as a result, I, Daniel Blake is absolutely essential viewing. 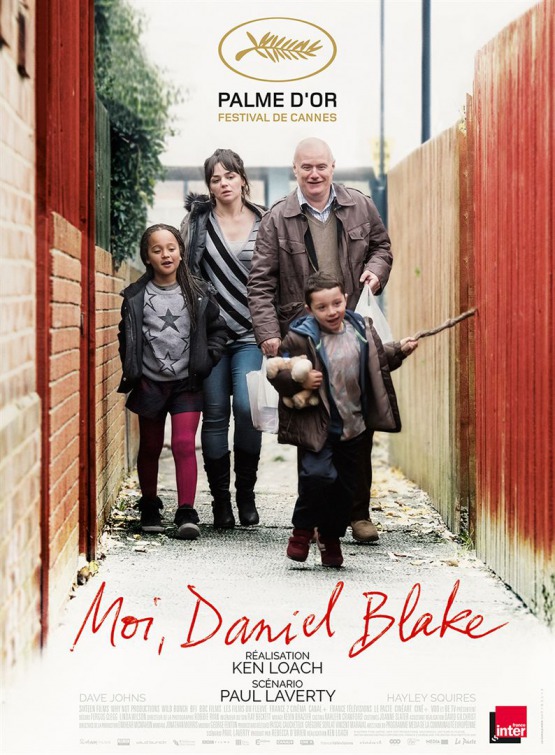