Courageous peasant Theseus attempts to stop the evil King Hyperion from coming into posession of the mythical Epirus Bow and unleashing the Titans to aid his quest to conquer Greece and overthrow the Gods of Olympus.

As the posters and trailers proudly boast, Immortals comes from the producers of 300 and it most certainly shares a lot of the same DNA as Zack Snyder’s hyper-stylized Spartan war movie. However, where 300 sidelined its story in favour of a never ending series of ultraviolent battle scenes, director Tarsem Singh favours stunning visuals that distract from the movies obvious failings, at least temporarily.

Delving into Greek mythology, the film focuses on Mickey Rourke’s murderous maniac King Hyperion’s quest to unleash the Titans from imprisonment and overthrow the Gods of Olympus. Integral to this plan is the Epirus Bow, a mythical weapon capable of creating arrows from thin air and releasing them at rapid fire, like an ancient machine gun.

Before Hyperion gets his mitts on the bow however, a brave peasant named Theseus (Henry Cavill) gets hold of it and is hell bent on killing Hyperion to avenge his mother’s murder, stopping the evil King’s quest to rule Greece in the process. With freed slave Stavros (Stephen Dorff) and Oracle Phaedra (Freida Pinto) in tow, Theseus sets out to join the Greek armies as they prepare to hold back Hyperion’s hordes in time for the film’s climactic battle scene, set almost entirely in a narrow hallway. Watching all of this from above are the Gods, sworn to stay out of it unless the Titans are freed.

If all that sounds like nonsense, it pretty much is. 300’s strongpoint was it’s acceptance of how camp and ridiculous it all was but Immortals doesn’t have that tongue in cheek element. It’s all exceptionally sincere and humourless as every has very serious conversations and barely anyone, short of Dorff’s comic relief, actually crack a smile. Mickey Rourke’s dark, brooding Hyperion is somewhat enjoyable as he murders virtually everyone he comes into contact with, friend or foe. Henry Cavill makes for a believable badass hero character but he is often gifted with such clunking dialogue that there’s not much he can really bring to proceedings short of looking moody and working out his chiselled abs.

For all the dire scripting and po-faced performances, the film isn’t entirely terrible. Though it could do with a few minutes chopped off the running time and some humour injected, it never tips over into full on boring. The action is handled well and the film, from top to bottom, looks absolutely sensational. Virtually every scene here would make a great painting, or at least a cool desktop background. Former music video director, Tarsem clearly has a flair for stunning shots. From the stark contrast of the dark grey Titans against the glowing sandy tones that populate the film to the gorgeous Freida Pinto wrapped in a red shall against a slate grey backdrop, the whole movie is a real feast for the eyes. The costume design from Eiko Ishioka is also noteworthy, with the Gods looking like they stepped right out of some bizarre fashion show and Hyperion and his armies gifted some imposing battle attire.

The movie will no doubt win some awards for it’s visual merits, and rightly so, but the power of these images fades all too quickly, leaving a slightly disappointing feeling as the less accomplished aspects of the film begin to flood back into the memory. 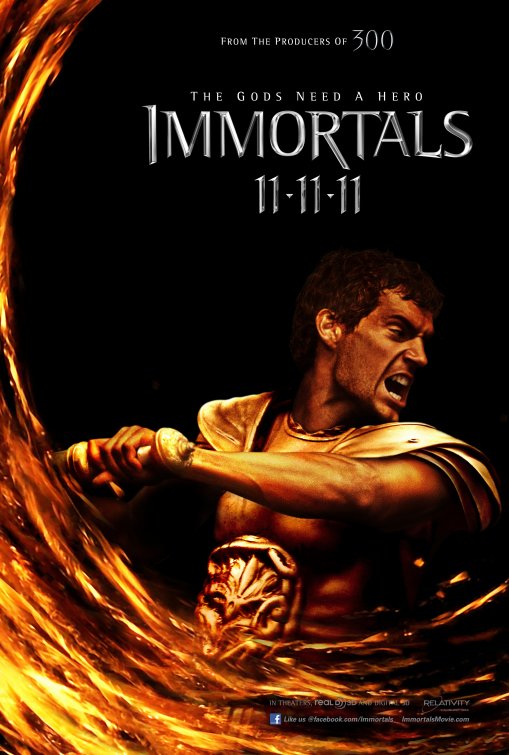