In the near future where people stop ageing at 25 and time is the currency, Will Salas (Timberlake) finds himself accused of a murder he didn’t commit and embarks on a mission to level out the world’s wealth, targeting the eternally wealthy Phillipe Weiss (Kartheiser), kidnapping his daughter Sylvia (Seyfried) along the way.

As intriguing premises go, In Time’s quite literal ‘time is money’ hook is certainly up there with the best. Written and directed by sci-fi veteran Andrew Niccol, the mind behind Gattaca, The Truman Show and S1mOne, In Time exists in a not-too-distant future where time is the currency and people’s bodies stop aging at 25. Their clock then begins, with only one year on it unless they can accrue more time. A person’s time is always there on their forearm in the form of a 13 digit clock, a Day-Glo reminder of their mortality. Wealth is still wildly uneven, with the rich living for centuries and the poor left with barely enough time to get to work in the morning.

After his mother (Olivia Wilde) ‘times out’ seconds before he could get to her and he is wrongly accused of stealing the time, and therefore killing, a rich man who found himself in the ghetto, Will (Justin Timberlake) sets off on a mission to bring down the system and level out the world’s wealth. Will uses his new found wealth to make his way to New Greenwich, where the eternally wealthy reside. Will stumbles into a poker game with Philippe Weiss (Vincent Kartheiser), one of the world’s richest men, and impresses him with his devil-may-care attitude, winning centuries worth of time in the process.

Also impressed is Weiss’ daughter Sylvia (Amanda Seyfried), who is immediately attracted to Will. On the trail of Will’s stolen time is a group of special police known as The Timekeepers, headed up by the veteran Ray Leon (Cillian Murphy). When Ray tracks Will down in New Greenwich, Will escapes, kidnapping Sylvia in the process. Though at first a hostage, it isn’t long before Sylvia is won over by Will’s plot to redistribute the world’s wealth and the pair of fugitives embark on a spree of bank robberies, like a futuristic Bonnie & Clyde.

In Time is a slick, enjoyable thriller but one that squanders it’s intriguing premise by sticking to fairly generic action clichés and too many nonsensical plot elements to even count. How does the transferring of time via clasping hands actually work? How is life stored in small metal containers? How can Will easily dispatch a room full of security guards when he is just an ordinary guy? How near is ‘the near future’ if there are already people who have lived for over a hundred years? These questions, and so many more, remain unanswered, leaving what could’ve been a great sci-fi movie no more than a generically entertaining thriller.

The cast do what they can with the material. Timberlake isn’t the most credible action hero but is essentially fine and has solid chemistry with Seyfried, here putting aside her dewy eyed romantic persona for a something sexier and tougher. Cillian Murphy is the closest the film comes to a standout, cast in somewhat of a villain role, he instils his Timekeeper character with an air of seen-it-all weariness. Vincent Kartheiser brings the same baby faced smarminess that has made his role on TV’s Mad Men one of the best love-to-hate characters around right now.

In Time is a fun film that’s never boring but never goes any further than that. Niccol wastes his golden idea on a standard ticking clock thriller when it could’ve been one of the best sci fi allegories in recent memory. Everything looks great, especially the eternally young cast, but the end result is no more than a glossy Hollywood thriller, whether it’s worth your 109 minutes or not is questionable. 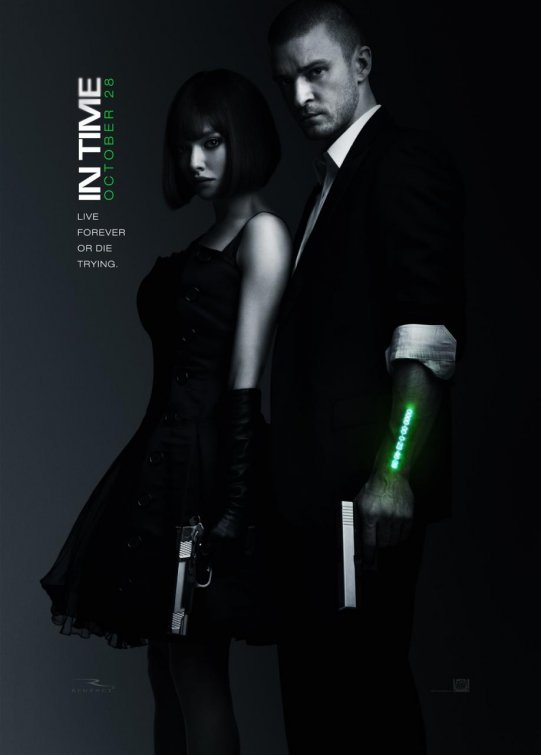