In a cinematic landscape where $200 million budgets are generally reserved for check-your-brain-at-the-door blockbusters involving one thing smashing into the other for over two hours, Christopher Nolan’s Interstellar is a film that should be savoured. Grand in scale, epic in scope and almost overwhelming to behold, it is a big, strange and massively ambitious sci-fi adventure that uses massive ideas to tell of simple home truths.

The film focuses on Cooper (Matthew McConaughey), a former test pilot and astronaut currently eking out a living as a corn farmer in a near future where food supplies are severely depleted and humanity is on the brink of extinction. Cooper is an old-fashioned dreamer, disheartened by society’s lack of ambition and complete abandonment of science. “We used to look up at the sky and wonder at our place in the stars”, he bemoans, “Now we just look down and worry about our place in the dirt.”

He lives on his farm with his two children: teenage son Tom (Timothee Chalamat) and young daughter Murph (Mackenzie Foy). Tom is showing signs of becoming a good, steady farmer but Murph is closer to her father’s true nature, already outsmarting her teachers and spending her time trying to prove the presence of a ghostly force in her bedroom that’s knocking books off her shelves.

Eventually, these bizarre occurrences lead Cooper to a hidden Nasa base where his former mentor Professor Brand (Michael Caine) has developed the ‘Lazarus Project’, a mission that will see a small crew – including his daughter Amelia (Anne Hathaway) – sent through a wormhole near Saturn to a small cluster of planets that might just include a suitable new home for humanity. The crew needs a top class pilot and Cooper just happens to fit the bill, so he makes the agonising decision to leave his children behind in favour of trying to save all of humanity.

Even if Cooper survives the extremely dangerous mission, a black hole near the cluster of planets means time is significantly stretched out: months, year and even decades can fly by in a matter of minutes, meaning Cooper risks missing out on a chunk of his children’s lives.

This hits at the heart of what Interstellar is really about. For all of its breathtaking spectacle and mind-bending theoretical physics, this is a film about the inescapable, blink-and-you’ll-miss-it nature of time. Though it takes a vastly different approach, this film actually hits at a lot of the same points as Richard Linklater’s 12-year-in-the-making Boyhood in chronicling the speed at which life moves and, in particular, how quickly a child grows up in the eyes of their parents.

Nolan is a director often accused of being too cold, creating technically marvellous films that are entertaining bit a little bit too chilly, and so far it’s been hard to dispute those accusations. But Interstellar is by far Nolan’s most personal film to date and as such, it’s his most emotionally resonant. There are numerous occasions here where even the hardest movie-goers might find it difficult to fight back the tears, no less than a scene where Cooper returns from a very brief field mission to discover that two decades have passed on Earth and he has missed 20 years worth of messages from his now-adult children.

For a story this small and intimate, Nolan has chosen the biggest possible canvas. Where last year’s technically outstanding space movie Gravity told its story on a contained, claustrophobic level, Nolan’s version of outer space is suitably sweeping and grand. Along with cinematographer Hoyte Van Hoytema – replacing his usual collaborator Wally Pfister – Nolan creates vast, sprawling landscapes, including a frozen tundra where even the clouds are giant chunks of ice and a planet entirely covered in water, with towering waves the size of mountains. Nolan shot over an hour of the film in 70mm IMAX and it shows; this is a film that deserves to be seen on the biggest, sharpest screen possible, with speakers loud enough to do justice to Hans Zimmer’s emphatic score.

Keeping the spectacle grounded is an excellent central performance by Matthew McConaughey, whose homespun charm makes him a perfect earthy presence amidst the cosmic expanses of space and the stainless-steel interiors of the spacecrafts that he inhabits. He is given a lot of emotional heavy-lifting here but hits every note perfectly, as does Jessica Chastain – as the adult incarnation of Murph – whose faith in her father has seen her dedicate her life to helping Brand on the mission.

On almost every level, Interstellar is a whopping achievement. Nolan has managed to spin love, loss, time, relativity, hard science fiction and theoretical physics into one gargantuan film that hits at both the brain and the heart. There will no doubt be those who pick at the science – though top physicist Kip Thorne acted as a consultant on the film – but that would be to miss the real merits of Interstellar. This is a majestic feat of big-budget filmmaking unlike any other that we’ve seen on screen for a long time. 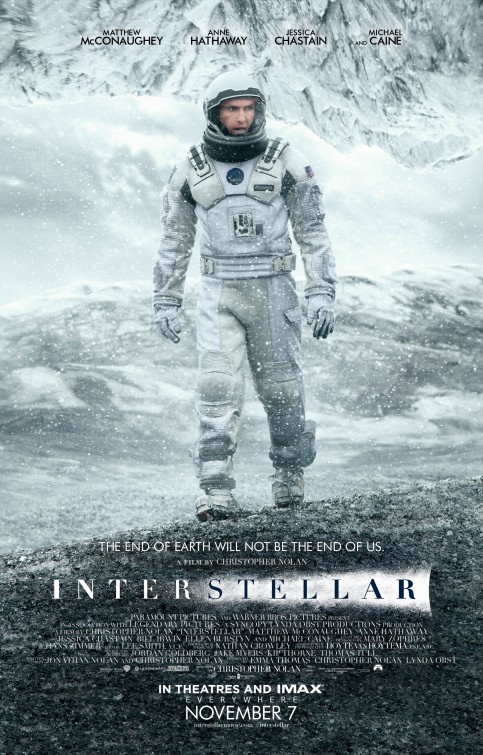