Marvel’s ‘Phase Two’ is underway and the unenviable task of following up the billion dollar success of The Avengers rests on the shiny shoulders of Iron Man, getting his third solo outing. But does it top Joss Whedon’s superhero team-up epic that broke box office records and pleased fans and critics alike? Well, no, but it makes a strong case for being the most entertaining solo movie in the ‘Marvel Cinematic Universe’.

In another one of Marvel’s left-field-but-oddly-perfect directorial choices, Lethal Weapon scribe Shane Black takes the reins from Jon Favreau and puts his undeniable stamp on the film, bending the superhero genre to fit his particular brand of smart-mouthed, old school action movie. Each Marvel movie so far has had its fair share of humour – particularly The Avengers – but Black almost tips the balance in favour of laughs here, despite some soul-searching for Tony Stark.

The film joins our billionaire playboy philanthropist hero shortly after the events of The Avengers. Despite being hailed as a hero, Tony can’t sleep at night. Wracked with anxiety and plagued by panic attacks, he turns to his work shop as a distraction and creates a suit that can work without him inside it, a great invention by the screenwriters that lets us have Stark and Iron Man on screen at the same time.

That’s not to say Tony doesn’t don the suit at all – in fact he dons many – but this film is very much about the man underneath the metal, with Tony’s post-New York trauma aggravated by the arrival of a couple of new threats. Firstly, there’s Aldrich Killian (Guy Pearce), a suave but slimy chemist who holds a pretty big grudge against Tony. Then there’s the Mandarin (Ben Kingsley), a theatrical middle-eastern warlord with a penchant for blowing stuff up then commandeering television networks to brag about it.

Initially happy to let the military, including pal James Rhodes (Don Cheadle) in his new guise of Iron Patriot, handle the Mandarin, it all gets personal for Tony when his driver Happy Hogan (Favreau) is hospitalised in one of the bombings. Tony issues a “come at me, bro” plea to the Mandarin, who gladly accepts and before long, Tony’s Malibu home is turned to rubble and he is stranded in Tennessee with a faulty suit and no way home.

If it sounds like there’s a lot going on, there is, and the film’s middle section feels a tad chaotic, with all of the key players tossed in different directions but Downey Jr anchors it all brilliantly in his best performance of the series. Black orchestrated Downey Jr’s career comeback with the brilliant Kiss Kiss, Bang Bang and he clearly knows how to get the best from his star. Downey Jr’s schtick has been in serious danger of wearing thin but the smug arrogance is at manageable levels this time around as he nails Black’s punchlines and snarky one-liners.

Meanwhile, the returning Paltrow and Cheadle get more time to shine and James Badge Dale makes for a suitably chewy henchman. Sadly Rebecca Hall – as Tony’s botanist ex Maya Hansen – surely finds most of her scenes on the cutting room floor.

If there’s a weak spot in the film then sadly it lies with the villains. It’s not a problem exclusive to this film; every Marvel movie without Loki has struggled in that regard so far. Nonetheless, there isn’t a villain here that can come close to stealing the show the way Tom Hiddleston does as Loki or Batman’s on screen rogues gallery have done in recent years. To give Kingsley, Black and co-screenwriter Drew Pearce their due, they make a refreshingly bold and funny stab at doing something different that is certainly memorable but doesn’t quite pay off in the way you would hope.

Despite the lack of a worthy adversary, Iron Man 3 is a smart summer spectacular that delivers all the comic book thrills and spills you would expect but with a distinctly retro feel, aided by Black’s whipsmart dialogue and offbeat casting of quintessential 80’s faces like Miguel Ferrer and William Sadler. Even the appearance of a child sidekick works thanks to Tony’s decidedly unsentimental reactions to the boy’s plight.

So it doesn’t top The Avengers, but it certainly blows Iron Man 2 out of the water and shows that the Marvel machine is only getting stronger. 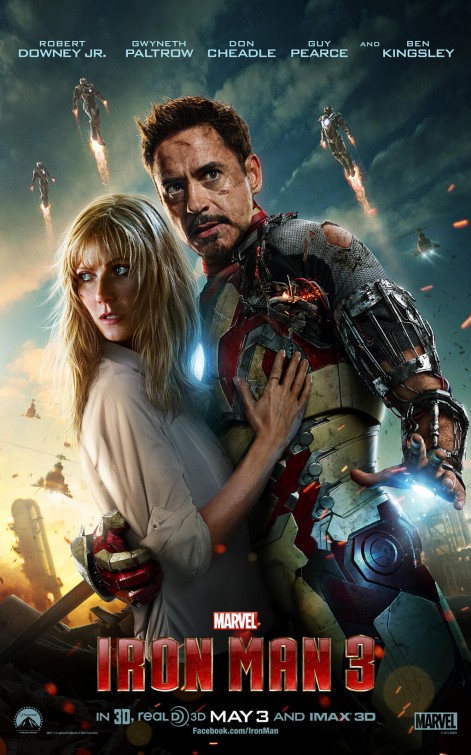