Has the long wait for a follow up to Christopher McQuarrie’s directorial debut Way of the Gun finally been worth it? With Tom Cruise stepping into the very large boots of a well loved literary giant this may be Jack Reacher’s toughest assignment yet.

Five years after winning an Oscar for his scintillating script, The Usual Suspects, McQuarrie’s under appreciated and over-loved Way of the Gun tried too hard to be cool and edgy. From a particularly foul mouthed opening scene featuring a young Sarah Silverman, to the broken glass shard of an ending, the film had an air of, ‘This may be my one shot so I ain’t holding back’, which is understandable but slightly lacking in maturity.

Now with a few more years under his belt, McQuarrie’s Jack Reacher is a much more assured piece of film making, with the exceptions of a too cute ending to the punishing car chase and a Looney Tunes bathroom brawl that somewhat escapes from the ‘realistic’ tone of the rest of the enterprise.

Adapted from Lee Child’s ninth Jack Reacher book McQuarrie’s screenwriting hand is evident in some sharp dialogue for the usually taciturn Reacher, and young women being punched in the face, which may be some kind of signature motif. It also provides one of the film’s few faults when the story occasionally takes a backseat to some philosophical chat, which while trenchant and well written does not involve anyone being punched in the face.

Reacher, the character, is an itinerant loner, initially loathe to become involved in a case he comes to close not investigate. But after noticing some inconsistencies in the powerfully unsettling shooting that opens the film and some impassioned pleas from the suspect’s defense attorney played wide eyed and high strung by Rosamund Pike, he decides to get to the bottom of the refreshingly down to earth conspiracy.

In fact the film is satisfyingly old school in many regards, from the aforementioned car chase to the straightforward nature of the punch ups, even the climactic shootout is a world away from the borderline superpowered, gadget packed staging of most recent releases in this genre.

Much was made after casting by fans of the books of Cruise’s small size compared to the hulking giant of the written word and not having read the books it is difficult to comment, but Cruise brings a sufficient level of badassery to the celluloid Reacher that hopefully the change in height can be ignored, although there are a few odd moments in the film where Reacher’s size is alluded to that don’t seem to have been updated to suit Cruise’s less imposing stature.

Cruise himself is excellent, bringing just the tiniest hint of asshole to the character, without which he may have been somewhat flat. When he warns the gang of thugs from the trailer to just walk away you know he is itching for them to throw down so he can mess them up. He even manages to generate some chemistry with Pike, who struggles a little in a small cast chock full of heavy hitters.

Special mention here goes to Werner Herzog as the Zec, the malevolent puppet master, who in one chilling scene outdoes all of Javier Bardem’s preening in Skyfall.

A solid sophomore effort from McQuarrie featuring a fine performance from Cruise ably supported by some great character actors and Rosamund Pike.

Cruise must also be happy with the finished product as he has tapped McQuarrie to write and direct MI:5, which hopefully we won’t have to wait another twelve years for.# 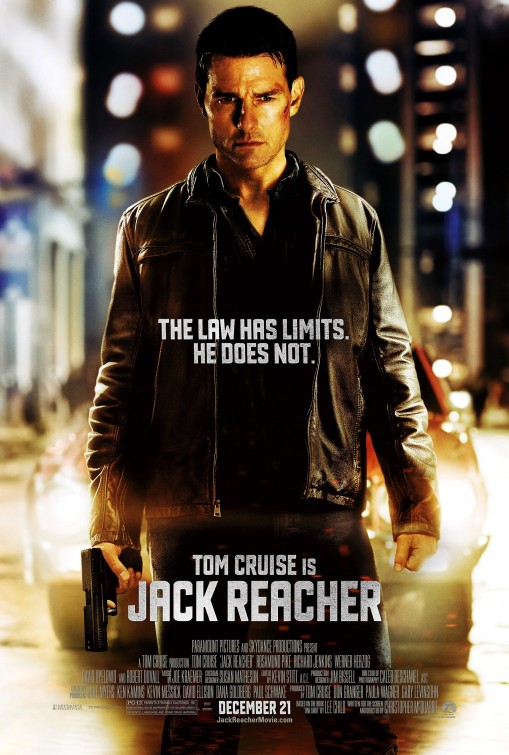