In Jack Ryan: Shadow Recruit, Chris Pine revives the late Tom Clancy’s most famous character in this espionage, action thriller. Is it a worthy entry into this character’s cinematic history or should it be kept classified?

As is common in modern movies, this is an origin story for the character previously portrayed by Alec Baldwin (The Hunt for Red October), Harrison Ford (Patriot Games, Clear & Present Danger) and Ben Affleck (The Sum of All Fears). This film is much closer in spirit to the Harrison Ford Jack Ryan movies of the 90s, which is no bad thing considering those are arguably the most accurate representation of the character.

Like all origin stories the character needs a defining event to motivate them into action; in this case the 9/11 terror attack. Ryan is studying in London when the attack happens and joins the marines to perform his patriotic duty. An early injury finds him stuck in a long recovery period where he is recruited by the CIA to covertly audit accounts and catches the eye of Cathy Muller (Keira Knightley), who he ends up living with sometime later.

The first act fast-forwards through more than a decade of Ryan’s life making it difficult to get to know the character beyond what he does and what he’s good at. This isn’t helped by the fact that Pine and Knightley have little to no chemistry, the relationship feels unbelievably forced. By the time the plot kicks in the audience isn’t given enough information about Jack Ryan to really care about him.

The plot, which pits Ryan against a sinister Russian who plans to crash the stock market and launch a terror attack on the US, is well paced and has moments of real tension where needed. The standard “hack into bad guy’s computer” sequence actually manages to illicit some suspense. It’s also not too difficult to follow considering the underlying complexity of bringing down the United States using financial means.

Chris Pine does a good job as Jack Ryan; his inherent likeability helps to identify with a character that isn’t immensely complicated as written. He handles the technobabble he’s tasked to deliver with precision and comes across as knowledgeable while also being believable in the action scenes. He manages to inject a welcome degree of humanity to the character, particularly once he’s taken his first life and is deeply affected for much of the movie.

The weakest link in the film is Keira Knightley by far. Her lower jaw is forever separated from the rest of her face as she tries to wrap her voice around a particularly terrible American accent that does nothing but distract every time she speaks. In fairness to her she isn’t given a tremendous amount to work with in the script but what she does have she doesn’t make good use of by any stretch.

Kevin Costner plays a mentor figure in CIA operative Thomas Harper. He does a good job, if not a very interesting one, in a typical “pay the bills” role; he does what he needs to do but little more. Uncomfortably, he spends a lot of time telling us how good Jack Ryan is without us seeing too much evidence of it.

Director Kenneth Branagh pulls double duty as Viktor Cherevin. As a villain he does a good enough job but there’s little to separate him from any other Russian antagonist in cinema. His motives are well telegraphed in his near sneers used in practically every scene but his motivation is never clearly established, he wants to bring down the US because he’s the bad guy in a Jack Ryan movie and that’s what bad guys in Jack Ryan movies seem to do.

There are some issues with the direction, most notably the tiresome rapid cutting and shaky cam in the action scenes. I honestly thought this had all been ironed out in action movies but here it is, as bad as ever. During those scenes it’s nearly impossible to make out what’s going on. There is good tension where there needs to be tension and the film isn’t overflowing with action at the expense of plot.

Overall Jack Ryan: Shadow Recruit is enjoyable yet forgettable origin story that sets up the inevitable franchise well enough and Chris Pine is well suited to the role. However, it doesn’t do enough to bring Tom Clancy into the modern era and will likely be remembered as little more than a standard issue spy movie. 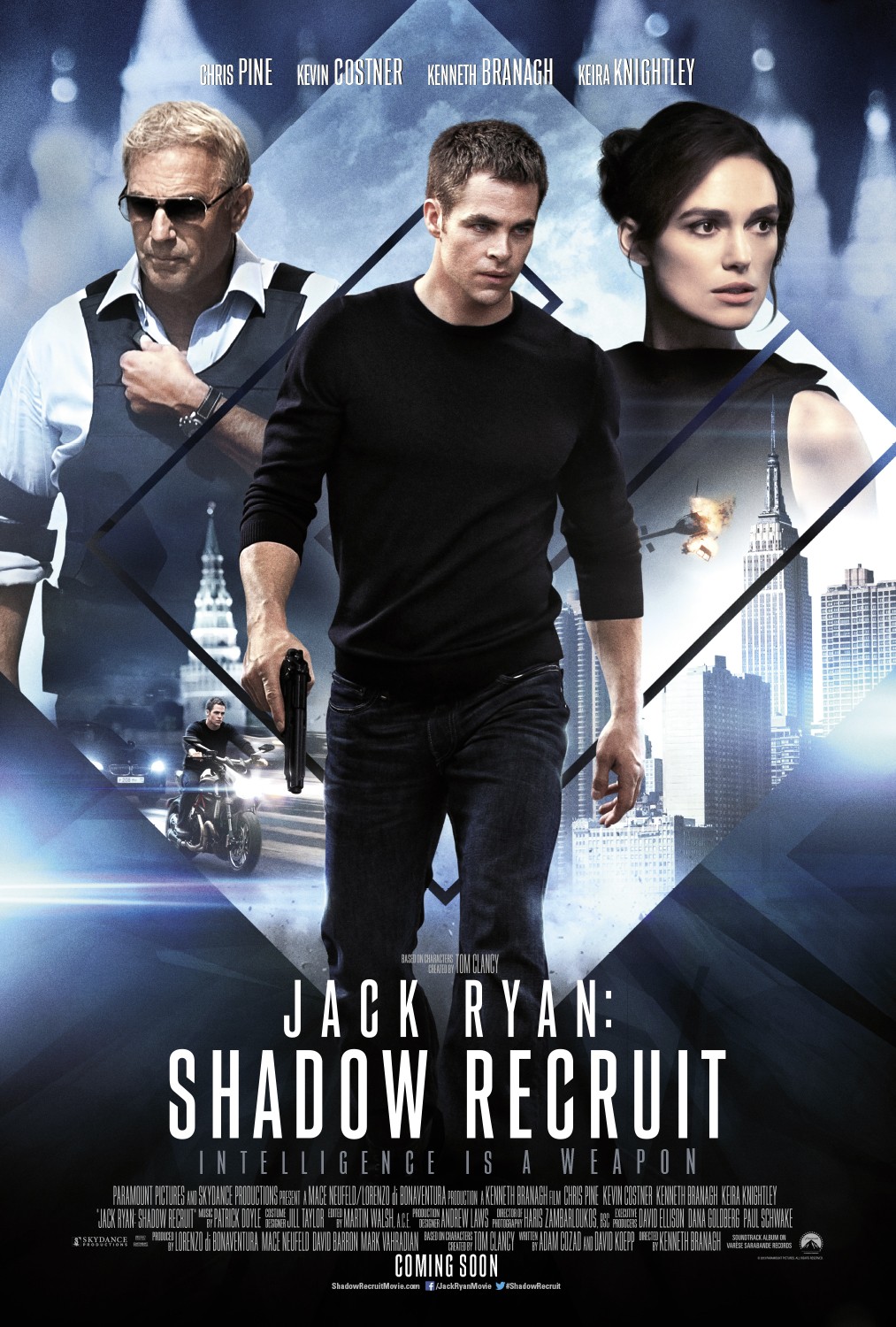