When his wife is brutally attacked, New Orleans teacher Will Gerrard (Nicolas Cage) becomes involved with an organisation of vigilantes, led by Simon (Guy Pearce), to seek revenge on his wife’s attacker.

No A list Hollywood leading man has quite as scattered a CV as Nicolas Cage, particularly since the turn of the millennia. Sporting a run of accomplished turns in the likes of Adaptation and The Weatherman, there’s also enjoyably mad cap performances (Bad Lieutenant, Kick Ass), generic action thrillers aplenty (Knowing, Next, Bangkok Dangerous) and some of the worst films of their decade (The Wicker Man, Ghost Rider). Roger Donaldson’s Justice sits at the high end of the ‘generic action thriller’ category on Cage’s resume, boasting an intriguing premise but declining to explore the moral implications in favour of a Fugitive-esque chase thriller.

Cage here plays Will Gerrard, a teacher at a rough New Orleans high school. The early scenes set up his perfect marriage to gorgeous concert cellist Laura (January Jones) as they share a night of drinking and dancing for their anniversary. Everything is hunky dory until Laura is attacked on her way home one night and ends up in hospital. As Will grieves in the hospital waiting room, he is approached by Simon (Guy Pearce). Herein lies the intriguing set up: Simon offers Will the chance for revenge on the man who assaulted his wife. All he has to do is say the word and Simon’s group of ‘concerned citizens’ will take care of it, the catch being that Will may soon be called upon to help out. Simon assures him it will be something small, following someone, destroying a security camera etc.

A few months later, Simon calls on Will for payback, at first enlisting him to perform small tasks but it isn’t long before things turn nasty and Will’s new assignment is to murder a supposed sex offender. Things go awry for Will and he ends up on Simon’s bad side. It’s here that the film takes a turn for the generic, slipping predictably into a routine chase thriller as Will tries to clear his name while Simon and his sidekicks, as well as the police, attempt to stop him.

The second half of the film is entertaining enough but all too obvious, each twist and turn feeling like something that’s been done a million times before and probably better. The film essentially achieves what it sets out to do, it’s just that it doesn’t set out to do very much which renders the outcome slightly disappointing given the moral quandary at the centre of the plot. The potential was here to explore the decision to have the killer murdered; surely such a decision would weigh heavily on someone’s mind, even in the heat of the moment? However, there’s barely any thought over it and Will moves on as if nothing happened.

That said, Will’s attempts to escape Simon’s almost omnipotent reach, with members of his organisation dotted everywhere, are at times fairly thrilling. The chase scenes and action scenes are handled well by Donaldson and at this point, Cage can do this stuff in his sleep. It’s a shame that he tends to favour this kind of phoned in performance rather than stretch himself in better material but it’s not his worst performance and certainly not his worst movie. There are times where his brand of overacting slips into the unintentionally funny but mostly he keeps it reigned in and plods along with the plot. Of the supporting cast, Guy Pearce gets the best role as the slick, sinister Simon. The rest are given very little do, with January Jones in a thankless wife role and Dexter’s Jennifer Carpenter presumably finding most of her scenes on the cutting room floor.

Overall, Justice is a fun but ultimately forgettable thriller. It’s predictable but the solid action scenes never let it get boring. A lack of any real ambition ultimately holds the film back, but there are worse Hollywood thrillers out there, particularly ones starring Nicolas Cage. 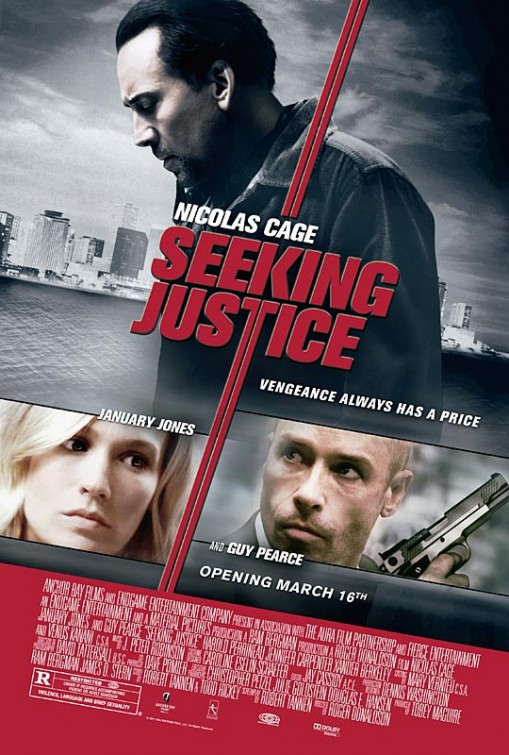