Adapting another of Tracy Letts’ plays – after 2006’s little-seen but actually quite good Bug – director William Freidkin delves into the murky world of a trailer-park deep in the heart of Texas with Killer Joe. Much like Bug, which virtually all took place in one location between two characters, Killer Joe never strays far from its stage roots but Friedkin and co more than makes up for it with atmosphere, violence and a strong central performance from Matthew McConaughey.

McConaughey plays the titular character, ‘Killer’ Joe Cooper, a Texan detective decked out all in black complete with aviators and a Stetson. He is hired by Chris Smith (Emile Hirsch), the embodiment of trailer-park trash, who has landed himself in trouble with some local drug dealers and needs Joe to knock off his mother to cash in on her life insurance and pay his debts.

The catch is that neither Chris nor his dim-witted dad Ansel (Thomas Haden Church) has enough cash to pay Joe. Luckily, Joe covets Chris’ naïve little sister Dottie (Juno Temple) and agrees to take her as a retainer until he can claim his payment.

If you think someone willing to kill their own mother for money, her ex-husband and his new wife (Gina Gershon) who let it happen and a detective who moonlights as a hitman all sound extremely unpleasant, then you’d be right. This is a filthy, grimy world severely lacking a moral compass that’s filled with the most depraved scum imaginable. Poor little Dottie is the only one who seems to have a shred of good left in her but is left confused by the situation her reprehensible family puts her in.

There’s an immense fascination in watching these awful people go about their business and Friedkin is successful in creating a down-and-dirty atmosphere that will make you feel filthy just for watching it.

It’s no surprise that this film earned the notorious NC-17 rating from US censors for its brutal violence and obscene use of a chicken leg. The real surprise is just how funny it all is. The film is laced with jet black humour, much of it coming from the killer lines and the shear audacity of some of the film’s chaotic events.

The highlight of the film is McConaughey, currently experiencing a career resurgence with the likes of Tropic Thunder, Lincoln Lawyer and this month’s Magic Mike. Here he subverts his laidback charm, giving a menacing, calculated turn as an icy and efficient killer who takes over the life of this family to devastating effect.

The film’s bloody, obscene and hilariously anarchic finale is the kind of scene that’s hard to watch but you can’t look away and, much like the rest of the film is admirable in its balls out, darkly funny approach to such downright sleazy material. Killer Joe is a noir nightmare that’s gripping right from the off and the cast are all impressive, particularly McConaughey and Temple, and as Friedkin’s most publicised movie in a long time, it’s certainly an attention-grabber. 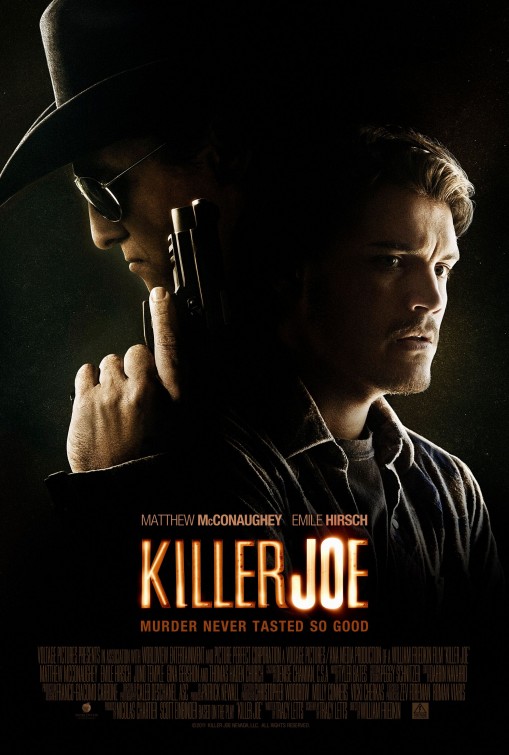