After his mesmerising 2007 Western epic The Assassination of Jesse James, New Zealand-born director Andrew Dominik twists another novel to dissect part of American culture with Killing Them Softly, based on George V Higgins novel Cogan’s Trade. Where Jesse James explored the beginnings of today’s celebrity-crazed culture, Killing Them Softly uses street level criminals as a brilliant, if less than subtle, metaphor for the financial woes of America in 2008.

The speeches from then-Presidential candidate Barack Obama preaching the merits of the American promise coming through on the radio in the background throughout the film provides a stark contrast to the lives of the characters fumbling their way through Dominik’s grimy criminal underworld. The lowest of the low are Frankie (Scoot McNairy) and Russell (Ben Mendelsohn), two struggling ex-cons who are hired by small-time hood Johnny Amato (Vincent Curatola, The Sopranos Johnny Sak) to knock over a card game. The game is run by Markie Trattman (Ray Liotta), who once robbed the game himself and got away with it making him the perfect fall guy for Frankie and Russell.

Enter reasonable hitman Jackie Cogan (Brad Pitt) – in a supremely cool entrance to the sound of Johnny Cash’s ‘When the Man Comes Around’ – hired by a corporate middle-man (Richard Jenkins) to fix the fall out of the card game. Though he knows it wasn’t Markie, Cogan also knows that in order to restore public confidence in the economy that is the card game, Markie has to pay.

That is pretty much the entire plot in a film that’s minimal story is there to underpin the style and mood in a film that is as smoothly artistic as it is cynical in its scathing indictment of capitalism.

While the cast are mostly playing symbols rather than actual characters, everyone is solid across the board. Pitt’s Cogan is cool and level-headed amidst a stream of panic and uncertainty and James Gandolfini is superb as a failing hitman, too drunk and sex-obsessed to stay in the game, expertly delivering two stunning monologues that bring nothing to the plot but standout as a master class in character acting.

Though Killing Them Softly is a leaner, meaner picture than the more sprawling Jesse James, it’s still a slow, languid film that devotes large chunks of time to hushed conversations about the state of the criminal economy. Each scene is impressive on its own but the middle third of the film is so dense with meandering monologues that the film is just crying out for something to break it up a little bit.

By the film’s end, the constant radio broadcasts wear increasingly thin and the last scene of Cogan explaining the corporate mentality that’s seeping into his business – as we’ve seen throughout the film with expenses having to be run by ‘the board’ – ensure Domink’s message is hammered home as hard as possible.

So Killing Them Softly is highly effective as a stylish genre piece with some bravura scenes – the super slow-motion execution a particular highlight of spraying bullets and shattered glass – and has a political message to boot. While Dominik never really translates the tension into excitement, the film is never boring and much of the dialogue crackles, delivered by as fine a cast as you’ll see all year. 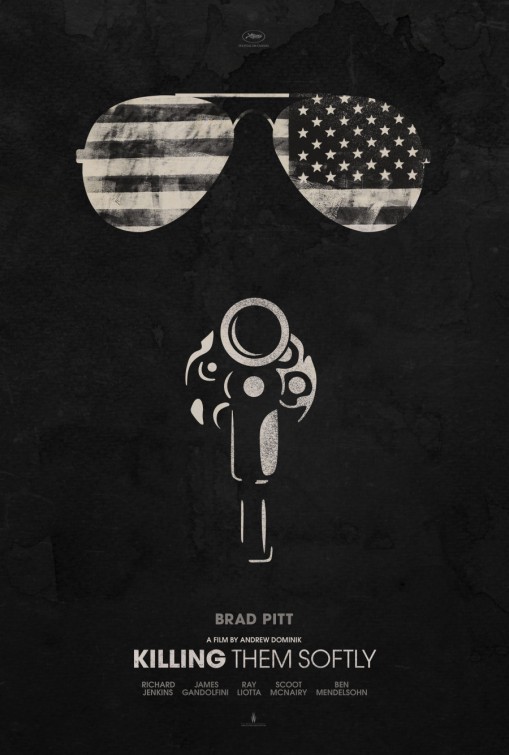