Kingsman: The Golden Circle wastes no time in getting right back to where its predecessor – 2014’s Kingsman: The Secret Service – left off, plunging the audience right into a madcap action scene. The series’ returning hero Eggsy (Taron Egerton) is jumped right outside of the men’s tailors that doubles as Kingsman’s headquarters, kicking off a wild chase scene as a black cab tears through the streets of London. It’s a fittingly high-octane reintroduction to Matthew Vaughn’s world of bad language, over-the-top action and skewered espionage tropes.

The opening scene is representative of the movie that follows in that it’s inventive, mostly entertaining, borderline incomprehensible and not as fresh as the first film. It’s understandable for a sequel to feel old hat considering it has quite literally been done before but the edgy, anarchic spirit that The Secret Service had has been replaced with something a bit more straightforward and, at times, just a little naff. The first film was a subversion of the smooth, gentleman spy and played with those tropes, turning some of them on their head and some of them up to eleven. That satirical edge is largely gone in The Golden Circle, leaving a much more conventional action sequel.

After the opening chase, the plot kicks in in earnest, with a calculated attack leaving the Kingsmen out of the picture, other than Eggsy and Merlin (Mark Strong), the Kingsmen’s version of Q. With their agency in dire straits, they have to turn to their American counterpart, the Statesmen, in order to take down international drug lord Poppy (Julianne Moore). Moore has a blast as the Americana-obsessed baddy, whose grand plan involves flooding the market with poisoned product and holding the US government to ransom for the antidote. Eggsy, Merlin and the Statesmen – including Jeff Bridges, Channing Tatum and Pedro Pascal – need to track down Poppy and her antidote before the drugs take effect and kill millions of people.

In terms of character and emotion, The Golden Circle feels like a solid step forward from its predecessor. After the death of Eggsy’s mentor Harry (Colin Firth) in the first film, we see Eggsy working to process that grief while maintaining the Kingsmen’s stiff-upper-lip professionalism. In a nice twist on the typical Bond formula, our spy hero is actually in a stable relationship with the woman he bedded last time around, Swedish princess Tilde (Hanna Alstrom). Later events in the film ultimately undercut the emotional stakes that are established early on in the film and life-or-death soon comes to mean very little. This undercuts the action scenes too, which still have a wit and verve to them but are hampered by Vaughn’s insistence on going back to the slow-mo close-up well, lingering on a shot of a mundane object, rendered in shiny CGI, as if it’s a miraculous stunt.

More tedious than that however is the persistently unpleasant attitude this series has towards women, which was solidified by the crass joke at the end of the last film that left many with a bad taste in their mouth. It seems Vaughn noted the reaction to that scene and decided to just double down on that type of humour. There’s a scene involving the placement of a tracking device that is so ill-judged that either Vaughn is completely tone deaf, doesn’t take kindly to being told what he should and shouldn’t do or just finds this kind of thing funny. Either way, it really doesn’t work.

This kind of puerile, laddy humour and the copious amounts of ultraviolence on display elsewhere in the film don’t sit well with the overall tone this time around. With an overly heroic score swelling at every opportunity, increasingly far-fetched gadgets and a painful extended cameo from Elton John, the film feels more like a family-friendly blockbuster. This tonal mismatch is largely what makes Kingsman: The Golden Circle – which is mostly entertaining and certainly never boring – such a disjointed experience that fails to push the envelope in the way its predecessor did. 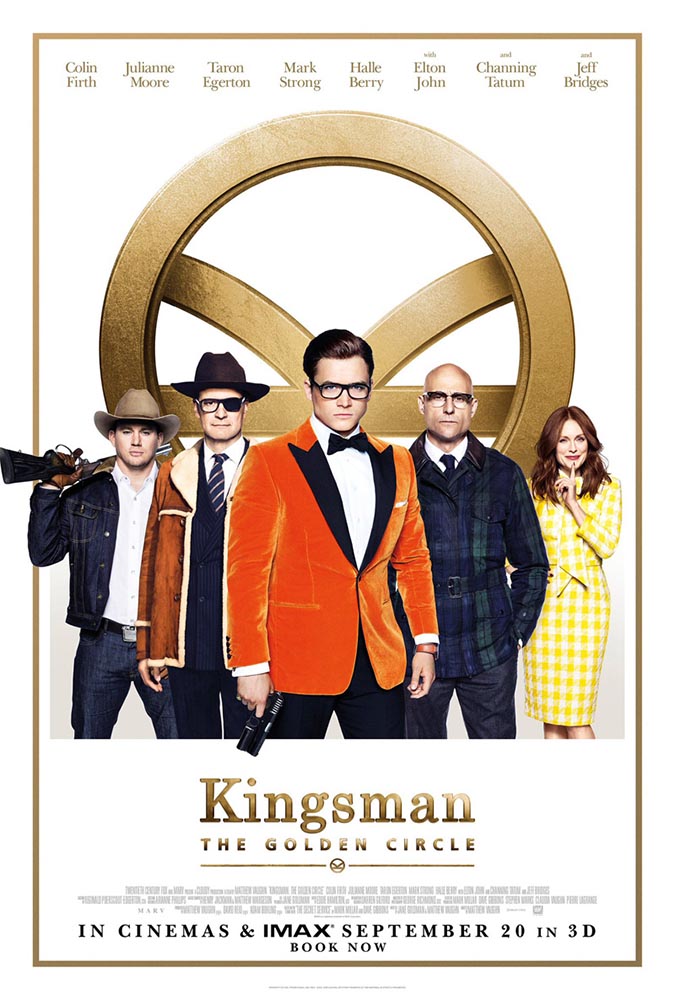