Kingsman: The Secret Service is a pastiche of Moore-era Bond films via the twisted sensibilities of comic book guru Mark Millar and director Matthew Vaughn – the team behind Kick-Ass – and it’s every bit as violent, ridiculous, provocative and flat-out enjoyable as that sounds.

Kingsman tells the story of a teenage tearaway named Eggsy (Taron Egerton) who’s brought into the world of high-class espionage by Harry Hart (Colin Firth), an agent in covert British spy agency the Kingsmen who’s still eaten up by guilt over the death of Eggsy’s father during a failed mission in the Middle East. Harry takes Eggsy under his wing and introduces him to the world of the Kingsmen, from the Savile Row tailors he uses as a civilian cover to the Bond-like gadgets that include poisonous pens and hand-grenade Zippos.

When an agent is killed in action, Harry puts Eggsy forward for an intensive training programme that sees him up against a group of privileged, upper class types who scoff at the prospect of a working class yob like Eggsy becoming an elite spy. This hits at what is the film’s main theme but also its main problem. Millar and Vaughn seem to be saying, at least early on, that no matter where you come from or who your family is, you can still make something of yourself, which is certainly a noble sentiment. The problem is in the execution, with the working class world and the characters that inhabit it, including Eggsy to a certain extent, feels clichéd and patronising, like a posh person’s perception of what life is like on a council estate.

Granted, authenticity most likely isn’t Vaughn’s biggest concern and the film definitely works better when it’s in full, over-the-top spy movie mode, which Vaughn handles with impressive style and verve. There are two standout sequences that are exhilarating in their giddy violence and slick choreography, both of which involve Harry laying waste to a room full of opponents. The first, in which he quickly despatches some low-lifes in Eggsy’s local pub, whets the appetite for a prolonged, bloody and vicious fight scene in a Southern church that pits Harry against the whole congregation in a fight to the death.

If the action is over-the-top, Millar’s story – adapted for the screen by Vaughn regular Jane Goldman – offers up plenty of massive characters to match. Firth is perfectly cast as the gentleman spy and there’s joy to be had in watching him break down his straight-laced image with the ultra-violent fight scenes. In a nice nod to his Harry Palmer character, Michael Caine pops up as the head of the Kingsmen and there’s also a rare good-guy turn from Mark Strong, with a fairly decent Scottish accent no less.

Never one to miss out on the chance to devour some scenery, Samuel L Jackson steals the show as lisping, tech billionaire baddie Valentine who plans to stop humanity from polluting the Earth by making them all destroy each other. His sidekick, played by Sofia Boutella, is a lithe assassin whose prosthetic legs are fitted with blades, which inevitably leads to some memorable and inventive action.

Ultimately, Kingsman: The Secret Service is a lively, hilarious and ballsy spoof of the spy genre that manages to have its cake and eat it, simultaneously poking fun at genre tropes while putting them to good use. The spy movie has gotten very serious in recent years, with Bourne’s angsty tone bleeding into modern Bond; Kingsman shows that it’s still possible for spy movies to be fun. 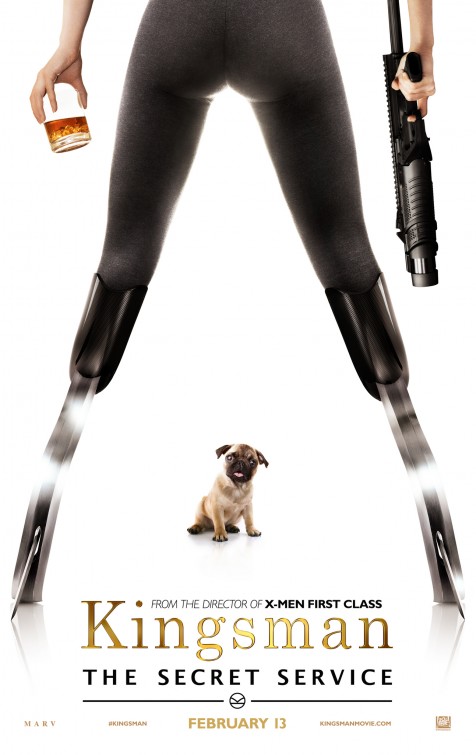