With Knives Out, writer-director Rian Johnson has taken the classic whodunnit and given it a fresh spin, taking all the elements of the traditional murder mystery and finding new ways to be inventive and playful with them. The set-up is simple and clear: on the evening of his 85th birthday, famous mystery author Harlan Thrombey (Christopher Plummer) is found murdered in the study of the family mansion. With his whole family assembled for Harlan’s party, there’s no shortage of suspects and Johnson relishes the chance to establish the motive of each family member, all of whom have some kind of axe to grind with the Thrombey patriarch.

We meet each member of Harlan’s family through a series of interviews with local police officers (Lakeith Stanfield and Noah Segan) and famous gentleman detective Benoit Blanc, played with a thick Southern accent and palpable glee by Daniel Craig. Harlan’s relatives are a rogues gallery of rich, entitled dummies still sponging off of him in one way or another. Among them is fake-happy influencer Joni (Toni Collette), snivelling publisher Walt (Michael Shannon), domineering real-estate mogul Linda (Jamie Lee Curtis) and black-sheep playboy Ransom (Chris Evans). Johnson shows the events of that fateful night through the eyes of each of these characters, drip feeding little pieces of the puzzle until they slowly start to fall into place.

There are enough unanswered questions there for Blanc to suspect foul play and so begins his investigation. He enlists the help of Harlan’s nurse Marta (Ana de Armas), seemingly the only good person in the old man’s immediate circle. She had a close relationship with him and may have played a key part in his demise – but a unique physical tell keeps her honest, at least as far as Blanc is concerned. Though she initially seems like a background character, Marta quickly becomes the centre of the film and de Armas gives a wonderful performance as the conscience of the piece, an innocent thrust into a world of liars and grotesques concerned only with their own self-preservation.

De Armas’ earnest performance keeps the film grounded and human, embodying the throughline of heart and empathy that Johnson maintains amidst all of the joyously knowing genre trappings of his tightly wound Cluedo plot. The rest of the cast seem to relish the chance to play something so arch, with Craig’s Southern-fried scenery-chewing the obvious highlight, but crucially no-one slips into full caricature. With a grisly murder at the centre of the plot, it’s no mean feat sustaining a witty and playful tone without becoming glib or mean-spirited but Johnson and his brilliant cast perform that delicate balancing act, ensuring that Knives Out is an expertly crafted and thrillingly inventive take on the murder mystery genre. 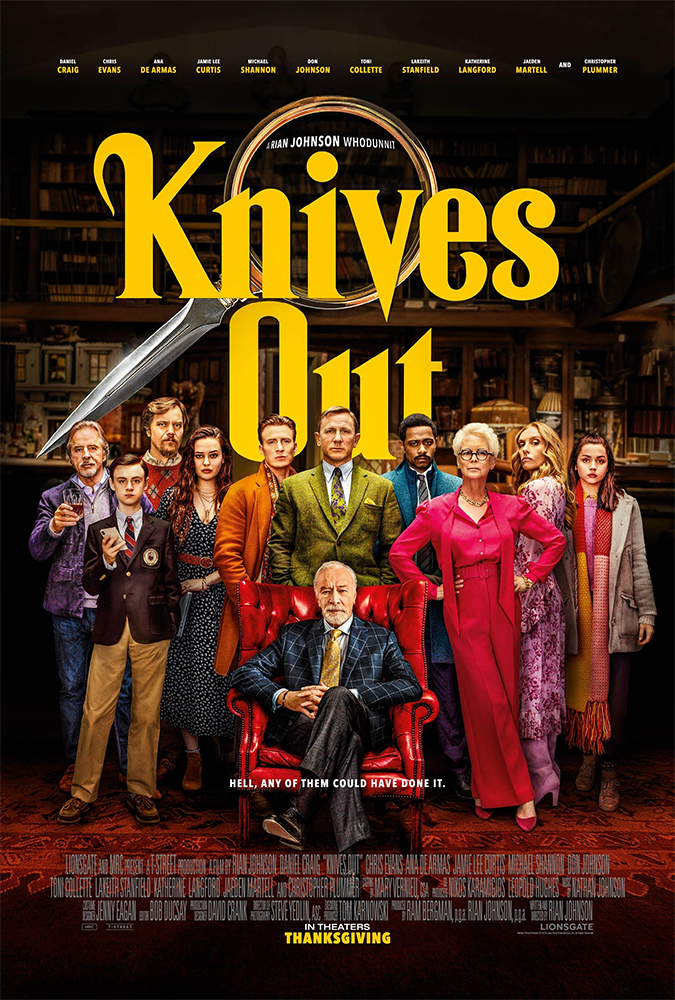