In a cinematic landscape where iconic characters and beloved stories are boiled down to properties that can be milked for every ounce of franchise potential, it’s no surprise to see King Kong resurrected. The giant ape has been a big screen icon since his big screen bow in 1933 and now he’s back and definitely bigger than ever – if not exactly better – in Kong: Skull Island. Though the film manages to capture the scale and presence of an impressively rendered Kong, it fails to bring anything new to the table and leaves its heavyweight cast with very little to do.

Directed by Kings of Summer helmer Jordan Vogt-Roberts as a colourful, often cartoonish mash-up of Jurassic Park and Apocalypse Now, the action takes place in the ‘70s, in the immediate wake of the Vietnam war. An explorer/crackpot conspiracy theorist named Bill Randa (John Goodman) has heard rumblings about an unknown island in the South Pacific that may be home to something special. Thanks to Cold War paranoia, he manages to convince Senator Willis (Richard Jenkins) to send him to the island – along with a band of soldiers, scientists and a photojournalist – on a discovery mission.

The opening scenes of the film have to a lot of heavy lifting to do in setting up a multitude of characters and their respective backstories. The film is packed with characters and most of them are played by actors you probably know and like, while almost none of them have anything of any interest to do. The film’s nominal leads are Conrad (Tom Hiddleston) and Mason Weaver (Brie Larson), a former special forces tracker and photojournalist respectively. We’re repeatedly told Conrad is a badass mercenary but the film does little to ever show us why. Weaver has seemingly no purpose beyond delivering the film’s environmental messages. It’s a criminal waste of Larson’s exceptional talent and neither she nor Hiddleston can overcome their bland characters.

Samuel L Jackson fares better as Packard, the Colonel who drags his men into this mission in an effort to delay going back home. When most of his men are killed in the film’s best action sequence – a helicopter squadron breaking through a wild storm to find Kong on the other side – Packard vows to destroy Kong, driven by guilt and the desire to avoid losing another war to a supposedly unsophisticated enemy. Packard’s descent into madness is heavily telegraphed and not as explored as well as it could have been but at least he has a defined arc and clear motivations.

Human characters might not be the main attraction of a monster movie but monsters on their own aren’t particularly interesting, especially when they are used as Kong is here. The effects, as you might expect, are fantastic – the photorealistic Kong has a genuine screen presence that’s crying out to be put to good use. Instead he’s never established as a character in his own right and spends the majority of the film on the periphery of the action. In Kong’s previous screen appearances, he was a tragic figure, a majestic force of nature ripped from his home and ultimately killed for the sake of man’s entertainment. But thanks to franchise commitments there’s no chance of that here, instead he only exists to do battle with other monsters and save the human characters. The action scenes are fine but there’s limited scope to how exciting a giant ape rolling around with a giant lizard can be, especially when you see it over and over again.

Vogt-Roberts follows in a long line of directors with one indie under their belt being given the keys to a massive property and the results are mixed. Visually, the film is striking, most notably for its use of strong colours and real locations, two things that are rare for blockbusters at the moment. He is clearly enamoured with Kong, at least visually, and uses him to great effect, framing the ape’s hulking body against everything from billowing flames and fading sunlight, to a misty moonlit sky.

Unfortunately his command of tone isn’t as sure footed as his visual sense and as such it’s never clear what type of film Skull Island is trying to be. At times it feels like it wants to be a schlocky B-movie, revelling in quippy dialogue and killing off its characters in gruesome, mean-spirited ways, all set to the most on-the-nose jukebox soundtrack this side of Suicide Squad. Then it turns on a dime and asks us to feel something, whether it be wonder at the sight of Kong or genuine emotion during an out of place coda dedicated to John C Reilly’s admittedly enjoyable comic relief character. With no stakes and no compelling characters, Skull Island is only ever intermittently entertaining and fails to do justice to one of cinema’s most enduring icons. 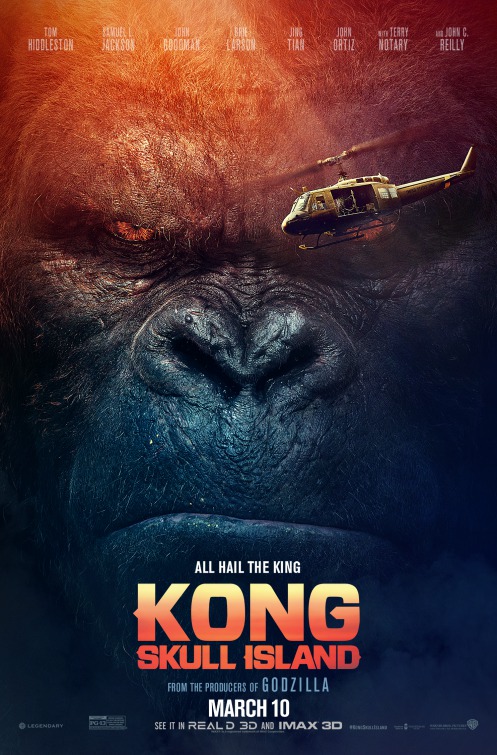