Whether it be the everyman oafs of his Cornetto trilogy, millennial slacker Scott Pilgrim or the lovelorn boy racer protagonist of Baby Driver, Edgar Wright’s films have so far skewed in a mostly male direction. With his new film, sleek thriller Last Night in Soho, Wright looks to redress that balance. Co-written by 1917 screenwriter Krysty Wilson-Cairns, the film follows the plight of two young women, separated across time but brought together by misogyny, abuse and a series of grisly crimes that span generations.

Inspired by a fascination with the swinging ‘60s and the lingering ghost of her late mother, naïve teenager Eloise (Thomasin Mackenzie) makes her way from a sleepy village in Cornwall to London to study fashion. Her homemade retro fashions and small-town innocence immediately make her an easy target for her mean girl roommate (Synnove Karlsen) and her entourage. Forced to leave her student flat, Eloise moves into a Soho bedsit, owned by no-nonsense landlady Miss Collins, played by ’60s icon Diana Rigg in her last screen role.

While in the bedsit, Eloise finds herself transported into the world of Sandie (Anya Taylor-Joy), an aspiring singer in ‘60s Soho. In what feels like a lucid dream, Eloise is whisked through a fantasy world of glitz and glamour, as Sandie is wined-and-dined by charming manager Jack (Matt Smith). In these late night excursions, Eloise lives vicariously through the more confident and charismatic Sandy and that starts to bleed into her waking life, impacting her love life and inspiring her designs.

Wright’s glittering recreation of ‘60s London is vivid and at times intoxicating, using well-chosen needle-drops and impeccable fashions to capture the allure of the era. It’s easy to see why Eloise is so fixated on it all, and Taylor-Joy is perfectly cast as a magnetic but vulnerable guide into the world. Wright doesn’t shy away from the seediness of the Soho nightclub scene however, and before long the rain-soaked, neon-lit streets begin to take on a sinister quality. As Sandie’s relationship with Jack becomes less romantic and more transactional, Eloise’s grip on reality begins to loosen and she questions whether what she’s seeing is just a fantasy, or a window into a lurid, violent past.

Though never one to shy away from genre thrills and spills, Last Night in Soho is Wright’s most straightforward attempt at horror. Almost entirely devoid of the director’s trademark comedic touch, this stylish giallo tribute is a dark delight on a number of levels, from Mackenzie’s wide-eyed central performance to Chung-hoon Chung’s dazzling cinematography. For all its style however, the script does fall down in the third act, with the themes around cross-generational female trauma ultimately proving to be too muddied to really make an impact. It’s a shame that all of the verve and style here isn’t propped up by something more substantial, but the film is successful enough as a piece of slickly entertaining, deliciously macabre eye candy. 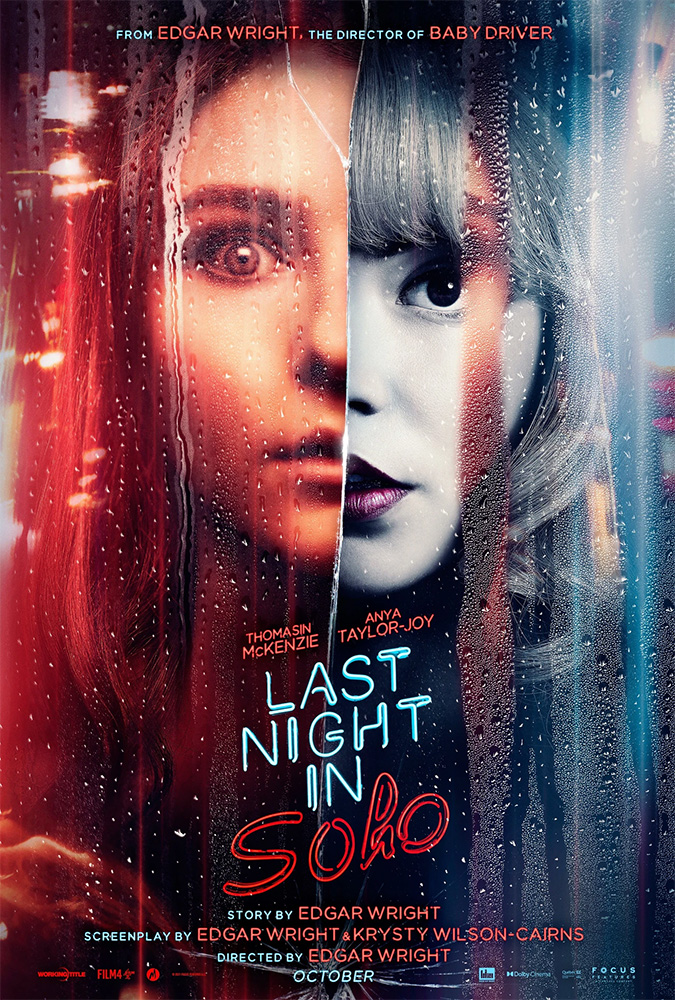