Opening with a meek, shy little child being cajoled by his older brother to execute a pig before eventually giving up and shooting it square in the head himself, it’s clear we’re back in the world of John Hillcoat. Lawless marks the third movie of Hillcoat’s comeback that started with 2003’s Aussie Western The Proposition and continued with the bleak Cormac McCarthy adaptation The Road and follows along the same bloody path as those films with this harsh opening setting the tone for the rest of the film.

The opening is also effective in establishing the dynamic between the Bondurant brothers, a family of legendary bootleggers in 30’s Virginia who provide the main focus of Lawless. The youngest and weakest is Jack (Shia LaBeouf) who desperately wants in on the family business. Then there’s Howard (Jason Clarke), the perennial drunk always ready to have his brother’s backs in a scuffle.

The leader of the three is Forrest (Tom Hardy), quiet but always ready to leap into brutal violence when his kin are threatened, it’s another menacing, physical performance from Hardy proving once again that he’s an unpredictable and exciting talent ready to make unusual choices with seemingly conventional material.

The local law enforcement are content to turn a blind eye to the brother’s thriving moonshine business as long as they get a good deal on their finest whisky. That is until special deputy Charlie Rakes (Guy Pearce) is sent in by the crooked district attorney to clamp down on bootlegging and sets his sights on the seemingly invincible Bondurants. In an incredible performance, Pearce portrays Rakes as a vicious dandified snake, as brutally violent and filled with contempt as he is immaculately dressed.

Rakes really makes an impression on the Bondurants by savagely beating Jack and sending his goons to cut the throat of the seemingly invincible Forrest who survives to carry on a feud with the corrupt lawman.

But this is really Jack’s film, charting his coming of age as he defies his brothers by stealing a batch of moonshine and selling it to big time gangster Floyd Banner (Gary Oldman, fantastic but underused). Finding himself with a bit of wealth and stature, Jack starts throwing his money around town on flash suits and fast cars while courting strict preacher’s daughter Bertha (Mia Wasikowska) in a somewhat perfunctory subplot.

The role might not be a stretch for LaBeouf but he delivers a career best performance and makes a great start in his shift to more serious fare. The supporting cast match the leads with strong performances from Chronicle breakout Dane DeHaan and the ubiquitous Jessica Chastain as Forrest’s love interest Maggie.

Lawless broaches many similar themes as his previous efforts, particularly The Proposition but with the script (from frequent Hillcoat collaborator Nick Cave) provides a lot more plot and therefore less time to explore the rich themes that run through Hillcoat’s body of work.

Though the ending tries too hard to be tidy, tying up a number of loose ends where a more open ending would have carried more weight, Lawless is entertaining for the entirety of it’s two-hour running time with a continuous sense of dread as you await the brutal violence that never seems to be far away. 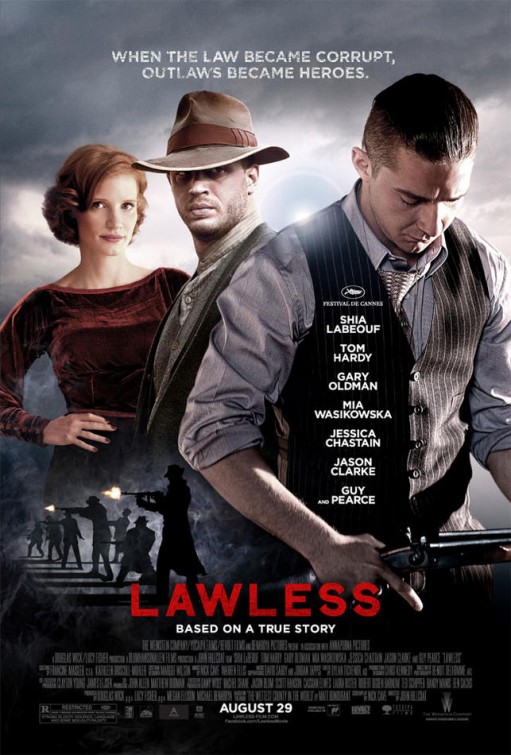