After wowing fans, critics and the Academy in a big way with his 2010 period crowd-pleaser The King’s Speech, director Tom Hooper has taken a massive step up in scale and scope by tackling one of the most enduring and successful stage musicals of all time, Les Miserables, the epic story of Jean Valjean (Hugh Jackman), a man imprisoned for stealing a loaf of bread and lives on the run from relentless lawman Inspector Javert (Russell Crowe).

The story is a familiar one – seen by over 60 million people on the stage – but Hooper’s major innovation here is having his actors sing live on set rather than lipsyncing a previously recorded version of their songs. The decision is key to the film’s success, allowing the cast the opportunity to slow down or speed up as the emotion of the scene plays out and really throw the emotion of the moment into their performances. It may not sound great for the soundtrack album but in the context of the film, it brings so much more weight and power to the songs than any pre-recorded effort could hope for.

However, it’s an idea that could have fallen apart had the cast not had the singing chops to pull it off and for the most part they are all fantastic. Stage veteran and Tony-award winner Hugh Jackman is the obvious choice for Valjean and hits every note while delivering a powerful and heartbreaking performance. Around him, Eddie Redmayne and Amanda Seyfried are solid as star-crossed lovers Marius and Cosette while stage star Samantha Barks is fantastic as Eponine, the spare part in their love triangle. There’s also able comic relief, much needed in such a grim story, from Sacha Baron Cohen and Helena Bonham Carter as the cackling villains the Thenardiers.

As good as everyone is, the standout is clearly Anne Hathaway. As factory worker/prostitute Fantine, she delivers the best extended-cameo in recent memory as she belts out a crushing rendition of I Dreamed a Dream in an unbroken, unrelenting four-and-a-half minute take with Hooper’s camera planted squarely in her face. Though only on screen for 20 minutes at most, she completely steals the show to the point that the film struggles to recover once she leaves the film.

If there’s a bum note, it’s poor Russell Crowe as Javert. While he looks the part and has suitable presence, he often seems uncomfortable and his singing unnatural.

Though the cast across the board really sell their characters, there are a number of plot points that fans of the stage show may already be accustomed to but for newcomers might require some suspension of disbelief. Marius and Cosette’s relationship never seems entirely plausible and how does Javert continually stumble across Valjean, wherever he goes? In fact, why is he so hell bent on finding Valjean ahead of all of his other duties? It’s questions like this that start to creep in during the film’s slower sections where interest starts to sag. Hooper has already cut a lot of time from the stage production but there are still a number of scenes that feel superfluous.

The most jarring element of the film however is Hooper’s obtrusive directorial choices. The extreme close-ups lend weight to some scenes – Hathaway’s showstopper in particular – but after a couple of hours of the camera being jammed in the actors’ faces, the impact is severely lessened, particularly as it then sweeps out across such large-scale CGI vistas.

But despite the distracting direction and a few saggy sections, Les Miserables is overall a powerful, beautiful and emotionally draining film enlivened by a fantastic cast bringing these stage staples to the big screen to devastating effect. 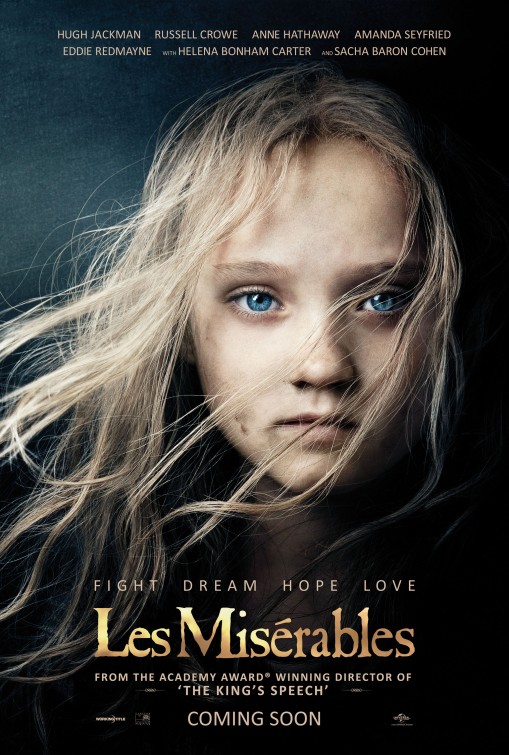