“Nobody feels like an adult; it’s the world’s dirty secret.” This is the central theme of Josh Radnor’s sophomore writing-directing effort Liberal Arts with the How I Met Your Mother star also taking centre stage as Jesse Fisher, a 35-year-old college admissions officer in New York City.

After a rough break-up, Jesse is invited back to his old college to attend the retirement dinner of his favourite professor and close friend Peter Hoberg (Richard Jenkins). Jesse holds a completely romanticised view of his college years, all passionate discussions of important literature and slow walks through the campus with a book in hand so naturally he jumps at the chance to go back to his alma mater.

While there, he meets wise-beyond-her-years Zibby (Elizabeth Olsen). The sparks immediately fly and despite Jesse’s misgivings about their age difference, they strike up a tentative relationship.

As a writer, Radnor clearly pours a lot of himself into the material, particularly his love of literature. Although it occasionally feels like he’s preaching the merits of books and classical music, he also isn’t afraid to puncture his own pretensions, particularly in a fun scene where Zibby lectures Jesse on why it just isn’t cool to hate on things for being popular anymore.

But it’s the concept of adulthood and how difficult it is to transition into real life that provides the meat of the film. Of course there’s Jesse who finds real life far more disappointing than he ever imagined but Radnor surrounds him with other characters that all have their own issues with aging. Zibby is desperate to be an adult but despite her confidence and maturity, she is still sweetly naïve and vulnerable. Prof. Hoberg has retired because he feels it’s what he’s supposed to do at his age but quickly realises he can’t live without teaching. Then on the fringes of the story is Dean (John Magaro), a student that Jesse meets who is struggling with depression and wonders why he isn’t enjoying the ‘best years of his life’.

It all adds up to a funny and rather sweet film that never really delves into the darker reaches of its themes the way something like Garden State, a very comparable film, does. As an actor, Radnor is a charming and easy-going screen presence though his directing style isn’t particularly cinematic and leaves a lot of the film feeling more like a sitcom.

Thankfully the small-scale of Liberal Arts doesn’t take away from the pleasant characters, strong acting and often very relatable themes. Alongside Radnor, Olsen gives a layered performance that shows just how good she really is. Jenkins is dependable as always and there are fantastic appearances Alison Janney and Zac Efron as a cynical romantics lecturer and a spaced out spiritualist respectively.

It might not be at the very top of the indie dramedy tree but Liberal Arts is a comforting, feel-good movie with more ideas and smarter writer than your average romcom. 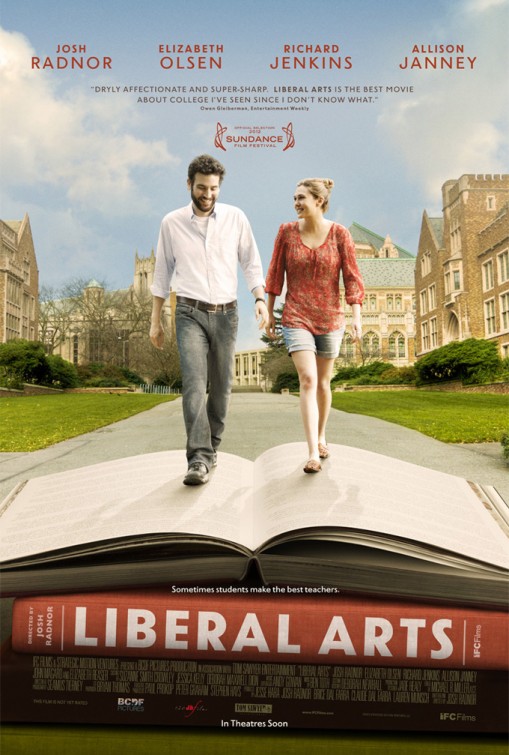