David S. Sandberg’s 2013 short Lights Out was a deliciously terrifying idea, brilliantly executed: a woman, alone in her apartment, is haunted by a ghostly figure that only appears when the lights are off. It was three minutes of watch-through-your-hands tension but what happens when you take that idea and try to stretch it out to feature length? Well Sandberg has done just that and the result is a flimsy studio horror that entertains but fails to match the simple scares of the short.

As in the short, Lights Out is built almost entirely on one of the most common, primal phobias that humans experience: a fear of the dark. We’ve all been freaked out by the prospects of what might be lurking in the dark or even sworn we’ve seen something moving through the shadows. The film exploits that with a villain who exclusively resides in darkness, disappearing as soon as the lights are on. An opening scene establishes this shady figure as she terrorises a factory manager (Billy Burke), darting from one shadow to another and pouncing when the lights go out.

The meat of the film then focuses on this man’s family: wife Sophie (Maria Bello), young son Martin (Gabriel Bateman) and step daughter Rebecca (Teresa Palmer). Sophie has a history of mental health problems and retreats into her room after the death of her husband, spending most nights having hushed conversations in darkened rooms with her ‘imaginary’ friend Diana, which terrifies Martin. Rebecca meanwhile lives alone in an apartment that wouldn’t look out of place in a Papa Roach video, decked out in Avenged Sevenfold posters and as many stylised skulls as you can think of. If that didn’t tip you off that she’s got some issues, she doesn’t even let her adoring long-term boyfriend Bret (Alexander DiPersia) stay overnight.

It’s no surprise that Sophie’s sleepover buddy Diana is the same creature that offed her husband and this light-averse ghost plans to get rid of Rebecca, Martin and anyone else who threatens her relationship with Sophie. Considering Rebecca and Martin cotton on to this fact pretty quickly, it’s baffling how many scenes they spend in dimly lit rooms but the film does show invention and ingenuity in its use of various different light sources. Diana flits in out and of sight courtesy of everything from the low hum of a tattoo parlour’s neon sign to car headlights and, in one particularly smart scene, the flashes of a gun blast. Though the film bears aesthetic similarities to most mainstream horrors in The Conjuring mould – it’s no surprise that horror maestro James Wan is a producer here – Sandberg sticks primarily to practical effects and makes the most of his few murky locations, giving the family home a musty and suffocating feel that adds to the unnerving atmosphere throughout.

Where Sandberg and screenwriter Eric Heisserer go wrong is in over explaining, giving Diana a clunky backstory that is at one point literally written on the wall. Yet for all they delve into her past and her connection with Sophie, the film is frustratingly inconsistent and unclear when it comes to her present form, failing to establish how or why she’s a ghost, how much light she can handle or why she’s seemingly immune to everything but sizzles when light hits her. It might sound like nit picking but the film is so insistent on letting us in on everything there is to know about this character except when it might restrict the plot or the set pieces. A film should work by its own rules but this film continually bends them to suit itself.

While the central monster worked better as a vague malevolent force, Lights Out still largely works thanks to Sandberg’s command of tension and his ability to craft the kind of scares that make you jump, then laugh afterwards. The characters don’t have much to them beyond their obvious archetypes but Palmer and Bello do an admirable job of making them believable and empathetic, providing some necessary heart at the centre of the jump scares. While it will never be a classic in the genre, Lights Out announces Sandberg as a talented purveyor of crowd-pleasing scares. 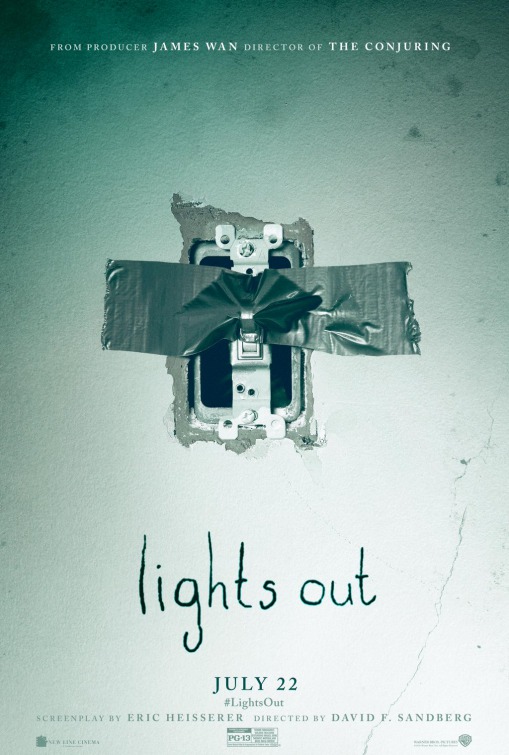