After emerging victorious in 2013’s battle of terrorist-attack-on-the-White House movies – beating out the bigger budget, star-driven White House Down – scrappy B-movie Olympus Has Fallen must’ve been deemed successful enough to warrant a sequel. So here we are, with London Has Fallen, a film that extrapolates on the modest charms of the first film to make a big Donald Trump of a movie: loud and crass with questionable views on race, but occasionally fun to watch.

Gerard Butler returns as Mike Banning, bodyguard and best buddy to President Benjamin Asher (Aaron Eckhart), who he rescued last time out from North Korean terrorists who seized the White House and schemed to destroy the USA. This time around, as the title might suggest, it’s London that comes under attack from terrorists. When the Prime Minister of the UK dies suddenly of ‘natural causes’, the world’s dignitaries, including Asher and a series of obvious caricatures, descend upon London for a hastily arranged funeral that is quickly overrun by terrorists posing as London police officers. A series of attacks across the city destroys “most of the unknown landmarks”, as one laughable news report puts it. The status of the unknown landmarks remains frustratingly unclear.

The terrorists, Middle Eastern this time around, plan to capture the Pres and execute him live on the internet. Their beef stems from a US drone attack in Yemen that killed the daughter of arms dealer Aamir Karkawi (Alon Aboutboul), and now he wants to bring the fight to the West and show them what it’s like to have their cities destroyed and innocent civilians killed. Banning has to batter his way across London and get damsel-in-distress Asher to an MI6 safe house and wait for the good guys to sweep in and get him, but with the police and military infiltrated by the bad guys, it’s hard to know who they can trust.

That the film deals with material that’s scarily close to real life events and echoes real life conflicts, director Babak Najafi (Easy Money II) and his screenwriters don’t seem at all concerned with any of that. They are content to drop in Middle Eastern bad guys as an easily recognisable villain and big up America as the world’s hero, without a hint of irony to any of it. There are numerous lines of dialogue that play on the kind of xenophobia that has come to the forefront this election year, the most memorable of which comes when Banning threatens to send one of the baddies back to “Fuckheadistan”.

It seems Najafi is particularly enamoured with Banning’s puerile potty mouth and teenage tough guy attitude, revelling in randomly crass moments of dialogue like “I’m thirsty as fuck!” that admittedly elicit incredulous laughter. But like its predecessor, it’s unclear whether the film has its tongue placed firmly in its cheek or if we’re meant to take any of this guff seriously. Most of the kiss off lines are awful – some of them recycled from other, better movies – but are played like we should be whooping and cheering rather than laughing (or groaning, as the case may be).

Where Najafi does a solid job is in the action scenes. Though the sequences of large scale destruction are rendered in shonky, outdated CGI that betrays the cheap-and-cheerful nature of this whole enterprise, there are some well shot smaller-scale action scenes that impress. There’s a surprisingly well done tracking shot in the film’s penultimate action sequence that follows Banning, video game style, through an alley way, violently despatching his enemies.

In scenes like that, London Has Fallen is an entertaining throwback to the one-man-army action flicks of the eighties and Butler is the right meat-headed hero for that kind of film. Everything surrounding these scenes is the problem though, from the soapy family scenes scored to the most insipid music imaginable to the “America, fuck yeah!” jingoism that permeates the film. Genre fans will no doubt appreciate the film’s macho swagger and brutal violence, while everyone else might wonder what Channing Tatum and Jamie Foxx’s secret service/President double act are up to. 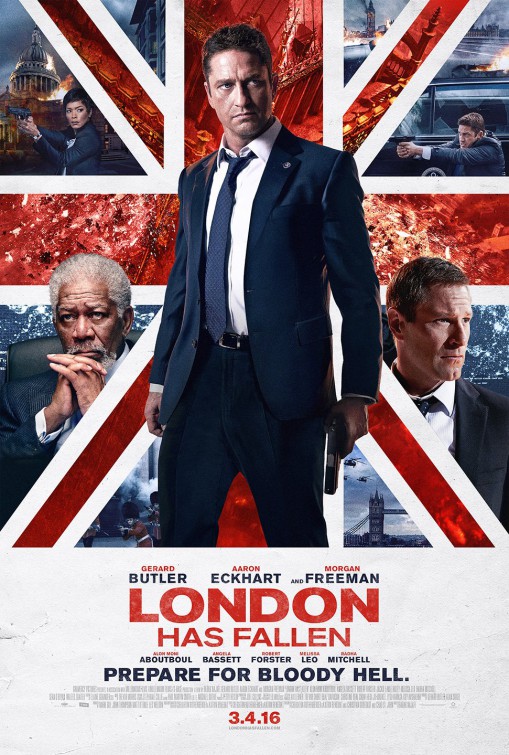