Greg Berlanti’s charming dramedy Love, Simon has all the trappings of any other American teen movies, with good looking high-schoolers bouncing between boozy house parties, pep rallies and school plays. Even its protagonist, Simon Spier (Nick Robinson), feels familiar: he’s the relatable hero of this kind of fantasy; a normal, easy-going guy amongst the cliched jocks, geeks and theater kids. The twist here however, is that Simon’s gay.

Simon keeps his sexuality a closely guarded secret, hiding it from his loving parents (Jennifer Garner and Josh Duhamel) and his tight-knit friend group, including Leah (Katherine Langford), Abby (Alexandra Shipp) and Nick (Jorge Lendeborg Jr). But when another student posts his own anonymous confession on a school gossip site, Simon enters into an email exchange that ultimately threatens to drag his secret out into the open.

Love, Simon – which is adapted from Becky Albertalli’s novel by This is Us writers Elizabeth Berger and Isaac Aptaker – primarily centers on the burgeoning relationship between Simon and his mysterious pen pal, who he only knows as Blue. Though Simon’s friends and family are, by his admission, all fairly liberal and would doubtless have no problem with his sexuality, he finds an understanding in Blue that he can’t find elsewhere. The mystery of Blue’s identity drives a lot of the plot as Simon tries to uncover the identity of his online confidente and it’s a compelling romantic fantasy that provides some moving ups and downs throughout the course of the film.

Less successful is a slightly icky subplot that sees Simon blackmailed by Martin (Logan Miller), a hapless drama kid who stumbles upon Simon’s emails. He has a crush on Abby and enlists Simon’s help in a hairbrained Cyrano de Bergerac-esque scheme to win her over. This primarily functions as a distraction to the main plot and takes up more run time than is necessary, particularly as it never really reaches a suitable solution. Martin is an unpleasant character that essentially takes Simon’s secret out of his own hands, yet he never really receives any kind of comeuppance, and the complications he causes among Simon and his friends are ultimately glossed over.

While it undeniably plays it safe and is by no means as transgressive as some of arthouse cinema’s forays into queer filmmaking, the safe, ordinariness of Love, Simon is in its own way progressive. This kind of glossy romantic fantasy has been told a million times with straight characters so presenting a gay character’s story in the same way is a quietly bold move. That it never really reckons with some of the harsher realities that Simon could face might rankle with some but the film treats both its characters and its subject matter with warmth, sensitivity and self-awareness.

In Nick Robinson, Berlanti has found an ideal lead to shoulder the brunt of this narrative. The Kings of Summer and Jurassic World star is at his most charming here, but wears the weight of his secret in his eyes and in his body language. Katherine Langford – who was so impressive in Netflix’s Thirteen Reasons Why – is quietly brilliant as the lovesick Leah, who has a secret of her own. Meanwhile Tony Hale and Natasha Rothwell provide the film’s biggest laughs as the buddy-buddy school principal and the over-this-shit drama teacher, respectively.

In typical teen movie fashion, there’s no mistaking this for real life – everyone is too pretty, the romantic gestures too grand, the houses too immaculately decorated. But nonetheless, Love, Simon is a likeable, easy-going and accessible romance that’s as smart and engaging as it is funny and heartwarming. 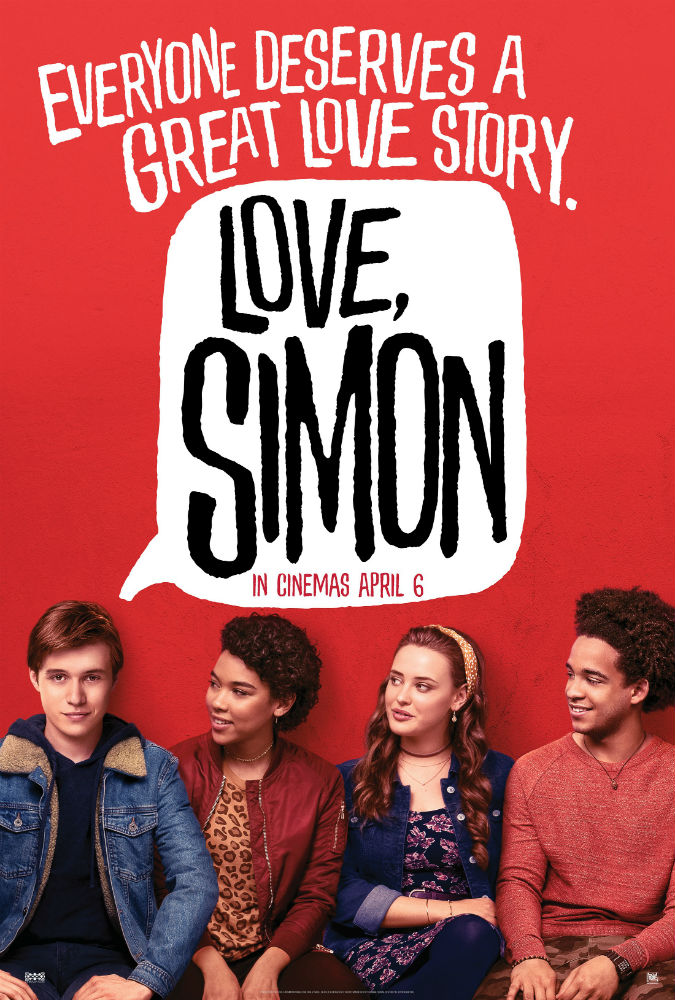