In Channing Tatum’s most revealing film yet, he bares almost all as the eponymous stripper Magic Mike, showing new Kid (Alex Pettyfer) the ropes (and g-strings and fireman uniforms) in a tobacco filtered Tampa, Florida. He certainly moves well for a big man but is there something here for those not captivated by the glistening abs and dry humping?

Tatum re-teams with director Steven Soderbergh after 2011’s mostly successful Haywire, where he played second fiddle to Gina Carano. This time clearly the lead, he radiates charm as Mike, an advocate of the work hard, party hard lifestyle that seems to inevitably accompany the most public of his several professions.

Mike’s dream job of bespoke furniture designer is strangely plausible and only a poor credit rating (stripping being a cash only profession) keeps him from making a go of it.

Although he keeps company with several ladies, sometimes at the same time, the closest he seems to have to a special someone is psychology major Joanna.

Olivia Munn as Joanna may only appear in a few key scenes but continues her transition from Web Celeb/Geek Icon to actual actress. Although the character is not entirely dissimilar to her role in Aaron Sorkin’s TV show The Newsroom she manages some particularly subtle moments with great skill and without coming across as actually acting.

Naturalism is a key feature of the performances and dialogue throughout, and even Matthew McConaughey’s outrageous (slightly) elder statesman Dallas never stoops to caricature.

Hard at work on one of his through-the-week jobs Mike meets wayward youth Adam (Alex Pettyfer) on a construction site and takes pity on him when they cross paths again while out on the town.

After showing his mettle in a club where Mike is pimping for customers a minor overdose gives Adam an opportunity to prove himself and transform into The Kid. Not the fanciest of dancers (until Dallas steps in to provide hilariously uncomfortable tutelage) he nevertheless finds himself a hit with the ladies and becomes part of the troupe.

The rest of the dancers provide colour and camaraderie for the two leads but that is all (outside of the actual stripping) although those wishing to see more of True Blood’s Joe Manganiello may get even more than they bargained for.

Soderbergh’s cinematography is at its best in the exteriors with some particularly showy moments that only just manage not to distract from the characters. (The caustics that play across the actors during the sandbar party are very close to too much.) But he fares less well during the actual stripping. The earlier shows are quite exciting and novel but a kind of stripper fatigue sets in after the fourth or fifth set when the moves have become familiar leaving only the props to change.

Once Adam’s sister Brooke, played by relative newcomer Cody Horn, enters the fray, the scene is set for a familiar but nonetheless enjoyably understated tale of love and betrayal. 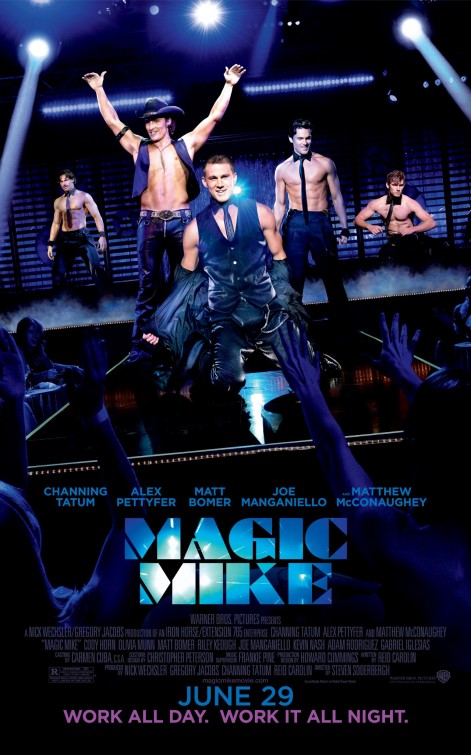