Much like its leading man, Zack Snyder’s Man of Steel is suffering from an identity crisis. While Clark Kent (Henry Cavill) is torn between a desire to be a regular human and fit in on Earth or embrace his Kryptonian roots, the film is similarly torn, struggling to decide whether it should be a weighty, character-driven epic or a manic, headache-inducing action movie. In the end, it decides to try and be both, sometimes simultaneously, with disappointingly mixed results.

Written by Dark Knight scripter David S. Goyer, the film focuses on Clark’s status as an alien and a general outsider, beginning with a lengthy prologue on an apocalyptic Krypton where young Kal El is sent to Earth by his father Jor El (Russell Crowe) to live a safer life. The Krypton scenes are impressively rendered but most of the tech design seems to just be there for the sake of it. For such an advanced race, you’d think the Kryptonians would’ve developed something better than the weird floating face-phones they have here.

After the explosive and befuddling opening, baby Kal El is found by kind Kansas couple Martha and Jonathan Kent (Diane Lane and Kevin Costner), who name him Clark and raise him as a human. Snyder and Goyer opt to tell the character’s origin in a non-linear way, weaving together scenes of a young Clark discovering he’s not the same as other kids with a grown-up Clark, drifting across the country trying to find some hint at his real background.

This is the films strongest section. The flashbacks provide some genuinely moving moments, shot in a wistful, sub-Malickian haze, as Ma and Pa Kent try to protect Clark, teaching him to keep his abilities under wraps for fear his alien status may be discovered and then who knows what could happen to him. As strong these scenes are, mainly due to Lane and Costner who are fantastic, they’re taken a leap too far as Cavill is asked to portray Clark as a sulky teenager in what proves to be an overblown, overwrought and just downright silly scene involving a tornado.

Back to grown-up Clark, whose travels have landed him in Northern Canada where an old Kryptonian ship has been discovered. In a departure from the classic story, it’s here that he first meets Lois Lane (Amy Adams), who is covering the story for the Daily Planet. Aboard the ship, Lois catches a glimpse of his otherworldly powers and is determined to break the story, tracking down Clark to his family home.

No sooner has the existence of an alien being been exposed than they start reigning from the skies as General Zod (Michael Shannon) and his army of the last remaining Kryptonians come to Earth to make the planet their new home. Shannon portrays Zod as a committed general who loves his people rather than an outright villain.

As impressive as Shannon is, this is the point the film just descends into standard action thrills and spills. After a quick and largely pointless excursion into space, the action crashes back onto Earth as the super-powered beings just bash lumps out of each other with no real outcome for what feels like forever. With everyone so powerful, there feels like there are no real consequences to their fight, other than the hundreds of thousands of unacknowledged civilian causalities there must have been as they tear up the city fighting each other.

The eventual climax proves to be a repeat of this only with some cheap attempts at building tension through side characters that just haven’t been developed at all. Why spend so much time putting Perry White (Laurence Fishburne) and his pals in jeopardy so late in the film when they’ve barely had a line leading up to this point? It’s almost impossible to care considering we’ve seen nothing of these people.

The arbitrary romance is also shoehorned in despite Lois and Clark having barely shared the screen. Where are Dean Cain and Teri Hatcher when you need them!?

Man of Steel isn’t entirely without merit but Snyder and Goyer throw away the good work done in the first half by ditching things like plot and character in favour of endless destruction. The final fight scene evokes The Matrix Revolutions – something that should be avoided at all costs – and the eventual outcome lacks any heft while completely missing a key aspect of what forms the character of Superman. 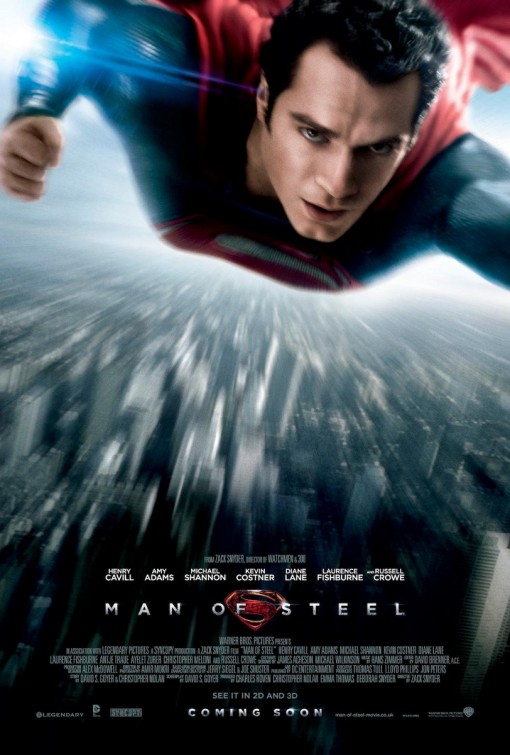