What do you do when the music stops and you are left holding a parcel of steaming excrement? Well, if you are a sociopathic investment banker, you divide it up and sell it to your friends before they realise precisely what they are buying. Margin Call examines the lives of the staff of a fictitious investment bank that finds itself on the verge of financial Armageddon and how the various characters deal with the enormity of the situation facing them.

Working late the evening after a round of redundancies Peter Sullivan (Zachary Quinto) discovers the investment bank he works for is teetering on the edge. He recalls his boss (Paul Bettany) from the pub and back to the office to check his calculations. The shock sinks in and the fallout spreads, drawing in successively senior members of the bank, until finally the bank’s owner (Jeremy Irons) flies in by helicopter in the early hours of the morning. Loyalties and friendships are tested and strained as a plan to save the bank is hatched (and staff hatcheted).

The characters form a vertical slice through the hierarchy of the bank. They battle to survive the fallout, jostling to manipulate their colleagues into the firing line and save their own skins. Irons is brilliant as Nero, fiddling while he puts the torch to every other Rome to save his own. The older members of staff (Kevin Spacey and Stanley Tucci) wearily come to accept the looming storm as they initially resist Irons’ will (on ethical grounds – believe it or not) before finally capitulating. Bettany, swaggering with testosterone and bile, delivers a soliloquy on why these bankers are a necessary evil while at the bottom of the pile junior Seth Bregman (Penn Badgley) is reduced to tears as he realises he’s going to lose the only job he ever wanted to do without the opportunity to earn the obscene money of his colleagues.

This is a compelling watch, tightly scripted with engaging performances from all the main characters – including Demi Moore! While not a particularly cinematic film (it’s closely shot, mainly on two floors of the same skyscraper in Manhattan) it is worth seeing on the big screen, if just for the lingering shot of Irons loitering over his lunchtime crossword as his actions precipitate a global financial meltdown.

While this is fiction you are left wondering just how close to reality the depiction is. Over-paid Machiavellian snakes slither over one another in a dance for survival and we pay these sociopaths massive sums to fuck us over.

It’s just a game. Just don’t be left holding the parcel of toxic shit when the music stops. 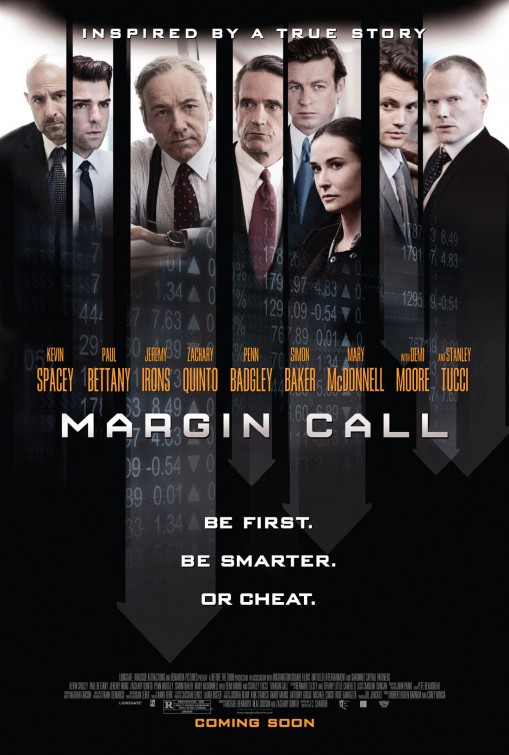