On holiday in Paris with his fiancee, Hollywood screenwriter Gil wants to move there and complete his novel, a nostalgia trip about Paris of the 1920’s. On a drunken stroll one night, Gill finds himself literally transported back to the era of his dreams, brushing shoulders with his idols and discovering why he longs to escape his current life.

After a string of recent films featuring as many bad ones as good ones, Woody Allen’s latest European outing is definitely one of the good ones. Rediscovering his obsession with the past and his longing for a certain era not too far away from the time of his birth and channels this, along with his usual neuroses and Europhile tendencies to produce this charming and whimsical romantic comedy.

Stepping into the Woody Allen role that’s recently been occupied by the likes of Josh Brolin, Larry David and Will Ferrell is a somewhat left field choice in Owen Wilson. Wilson may not be the greatest actor but he possesses an easy likeability and charming enthusiasm that really makes him one of the more successful Allen substitutes.

Wilson plays Gil Pender, an American writer holidaying in Paris with his fiancée Inez (Rachel McAdams) and her parents. Gil is a successful Hollywood screenwriter but longs to write novels and finds Paris a massive inspiration, in love with the romanticism of the city and desperate to move there to complete his novel. This vastly differs from Inez who wants to settle into a Californian suburb and is far happier shopping and dancing with her insufferable friend Paul (Michael Sheen) than taking in the culture of the city that so enchants Gil. Finding himself lost while walking the streets one night, Gil is picked up by a vintage Peugeot which transports him to a party in 1920s’s Paris, the golden age he so yearns to be a part of.

The film immediately comes to life during Gil’s midnight jaunts to the past as he brushes shoulders with his idols such as Scott Fitzgerald (Tom Hiddleston), Cole Porter (Yves Heck) and Ernest Hemingway (Corey Stoll), full of hilariously masculine tales of hunting and fighting, preaching the merits of courage and bravery at every opportunity. Gil also meets art groupie Adriana (Marion Cottillard), former lover of Braque and Modigliani and currently courting Picasso. The pair fall for each other immediately and share many a romantic stroll through Paris at night, a notion Gil’s fiancée in the present day would never entertain. It is through Adriana and her own longing for a time in the not too distant past that Gil realises that everyone has their own ‘golden era’ and that maybe he pines for a previous era because his current situation isn’t what he wants.

The realisation of the characters from the past is superb across the board with Stoll’s Hemingway a particular standout, along with a brilliant cameo from Adrien Brody as the charmingly stupid Salvador Dali. Much of the film relies on the novelty of these characters popping up and mines a lot of comedy from it and while there’s more here for viewers who are familiar with the icons on show here, Allen keeps it fairly broad so the unitiated will still find a lot to enjoy.

Overall Midnight In Paris may not be packed full of substance but it’s a clever, witty film with enough of a light hearted message at it’s centre to keep it from being entirely throwaway. Wilson is integral to the film’s success and carries it well, proving a likeable surrogate for Allen, carrying off the chatterbox dialogue with bags of wide eyed enthusiasm. The array of colourful characters from the past is fun and Cottillard provides a delightful antidote to McAdams, here playing against type as a spoiled Beverley Hills brat. 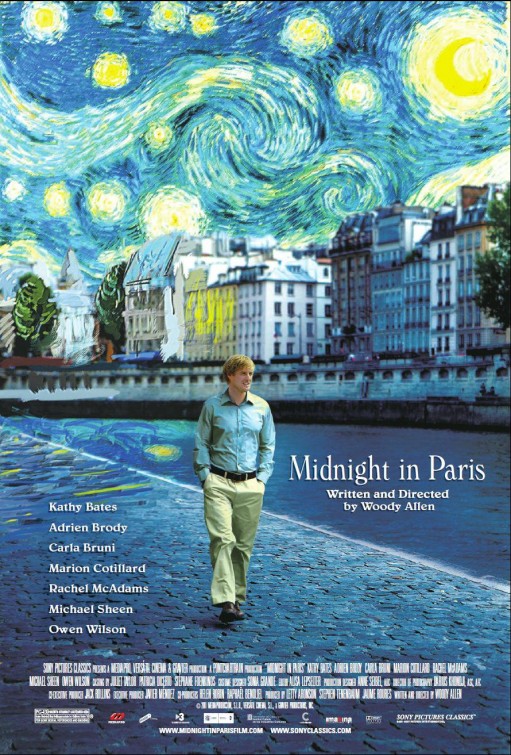