Every few years, two movies will come along time featuring virtually identical subject matter and be released only months apart. Think Deep Impact and Armageddon. This year, the subject of such coincidence is the story of Snow White and the Seven Dwarves. Coming later this year is gloomy Kristen Stewart-starring Snow White & The Huntsman, a dark action-adventure take on the famous Grimm fairy tale. First out the gate however is Tarsem Singh’s Mirror Mirror, a light hearted, fantastical tale that looked poised to play the In Cold Blood to Huntsman’s Capote.

Thankfully Mirror Mirror proves to be better than perhaps anyone might expect from the abysmal marketing. Without just trailing out the much-loved Disney version, Tarsem creates a fun, frothy fairy tale that’s filled with unique and stunning visuals as well as some cheesy humour that will appeal to both kids and the less-cynical adults in attendance.

The film opens with the wicked Queen (Julia Roberts) telling the story of Snow White (Lily Collins), the princess who now finds herself locked inside the palace after her father’s death. The Queen’s penchant for extravagant parties has left the kingdom in massive debt but the arrival of handsome, wealthy young Prince Alcott (Armie Hammer) gives her an idea. She throws a ball in his honour in an attempt to woo him, marry him and steal his considerable wealth.

Snow White has a plan of her own however. After sneaking out of the palace and seeing how desolate the once happy kingdom has become, she plans to enlist Alcott to help her overthrow the Queen and return the kingdom to its former glory. Arriving at the party in a swan dress as ridiculous as it is magnificent, Snow immediately captures the attention of Alcott. Enraged, the Queen banishes Snow out into the wilderness where she comes across the seven dwarves who, in this version of the tale, work as bandits, robbing anyone who comes through the forest. Together they plot to rescue Alcott from his impending marriage to the Queen and save the kingdom once and for all.

It’s all pretty standard fairytale stuff but Tarsem puts a new spin on things without going down the clichéd route of adapting a classic kids story into something ‘dark’ the way someone like Tim Burton would. The tone is consistently light and humorous, having a lot of fun with the material but never mocking it. Its closest comparison in recent years is Disney’s Enchanted, minus the musical numbers.

The cast is a slightly eclectic mix but they all have a ball with their roles, particularly Armie Hammer who nails the tone to a tee and really seems to relish every minute of it. It’s a performance that could’ve gone badly wrong but Hammer gives an impressive comedic performance that provides many of the film’s highlights. Lily Collins, daughter of Phil, for most of the film is just there to look pretty and act sweet, but she is nonetheless perfectly cast. With a face perfect for the big screen and an impish smile, she calls to mind a young Audrey Hepburn.

The biggest star of the picture, Julia Roberts is the one who slightly misses the tone. Her performance has an air of trying too hard to hit the campy heights that Hammer, Collins and the strong supporting cast (including an excellent Nathan Lane) have reached, her sharp lines often eliciting groans instead of laughs.

Mirror Mirror is a slight and uneven tale that’s certain to repulse as many people as it enchants but nonetheless its charm and good nature, as well as the sumptuous visuals, make for an entertaining fantasy. It may not be thought of as the best Snow White movie of the year but it’s sure to be remembered as the most fun. 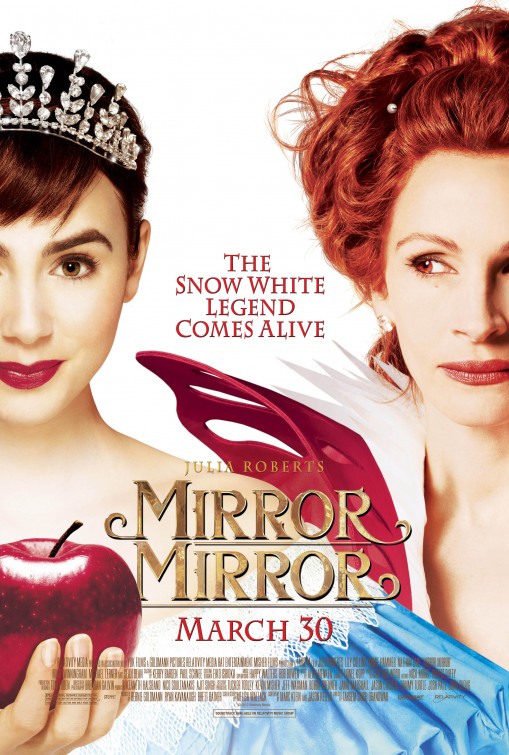