After spending the past five years capitalising on his breakout role in 2010’s Aussie drama Animal Kingdom with a series of memorable supporting turns, Ben Mendelsohn has finally been given a role that fully utilises his talent, courtesy of Half Nelson pair Anna Boden and Ryan Fleck’s new film, charming road movie/gambling flick Mississippi Grind.

Mendelsohn stars as Gerry, a gambling addict and probably an alcoholic too, with a series of debts and a wife and daughter who have long since left him. He’s the kind of guy who takes every slight coincidence as a sign from above to make another bet. After buying into a low stakes poker tournament, Gerry meets a younger, slicker gambler named Curtis (Ryan Reynolds) who gives off the air of a guy who doesn’t care whether he wins or loses.

Gerry is taken in by Curtis’ charm and confidence and Curtis seems to see rumpled, beta-male Gerry as some kind of a project. They strike up a fast friendship Curtis agrees to finance a road trip from Iowa to Louisiana, hitting every casino, race track and underground game on the way until they make it to a high stakes game in New Orleans run by someone from one of Curtis’ many dubious stories.

As far as plot goes, that’s pretty much it for Mississippi Grind, with Boden and Fleck content just to follow these two guys on their journey. In the process, they take us inside the seedy small-town casinos, smokey dive bars and dingy motels that they frequent. The unshowy direction, coupled with Andrij Parek’s cinematography and a bluesy soundtrack, perfectly captures this dingy, transient world, lending it a real texture that feels like a welcome change from the usual glitz and glamour of more traditional gambling flicks. This is more in line with 70’s cinema, in particular Robert Altman and James Toback – who has a cameo here – and the obvious reference point is Altman’s California Split.

Mendelsohn and Reynolds make a compelling odd couple. Mendelsohn is a treat as Gerry, who’s exhausted, hangdog demeanour gives way to childlike enthusiasm when he’s around Curtis. He’s a pathological loser who refuses to quit when he’s ahead and keeps pushing and pushing for the next thrill, gambling money that he doesn’t have and blowing off people that he owes but Mendelsohn is so likeable here and brings a damaged sweetness to the character that we just desperately want things to work out for him.

Curtis is more of a mystery and Reynolds suggests a lot of inner pain and heartache without giving too much away. His baggy, tired eyes are at odds with the easy charm he uses on everyone around him. Reynolds is always the fast-talking wise guy but here there’s something a bit sadder about it, like he’s using it to deflect, like he’s always ‘on’ and can’t let that façade slip for fear of anyone noticing he’s just as desperate and broken as Gerry. It’s one of Reynolds’ best performances to date and he and Mendelsohn share such a natural chemistry that watching them together is a real highlight.

Along the way, the pair stop off to meet Simone (Sienna Miller), one of Curtis’ many lady friends but one you feel he might actually settle down with if he could ever manage to do such a thing. She works a river boat game and moonlights as a hooker, along with her friend Vanessa (Analeigh Tipton). The film’s standout scene comes after a night of hard drinking finds Curtis, Gerry and Vanessa back at Simone’s apartment. Curtis and Simone disappear off to the bedroom and debate the merits of making a go of their relationship while Gerry and Vanessa share a beautiful flirtation in the living room, two damaged people finding a real connection with each other. It’s wonderfully played by both actors and Tipton, as with all of the actors here, imbues her character with a lived in quality, suggesting a lifetime of experience that didn’t just begin when the cameras started rolling.

Mississippi Grind is low-key but still very impactful, finding thrills in the gambling scenes, humour in the exchanges between the characters and pathos in its study of two desperate, lost men. If there’s a downside, it feels like Boden and Fleck missed a few natural end points and extended the story longer than it perhaps needed to go, but when you’re spending time with characters are watchable as Gerry and Curtis, who’s complaining? 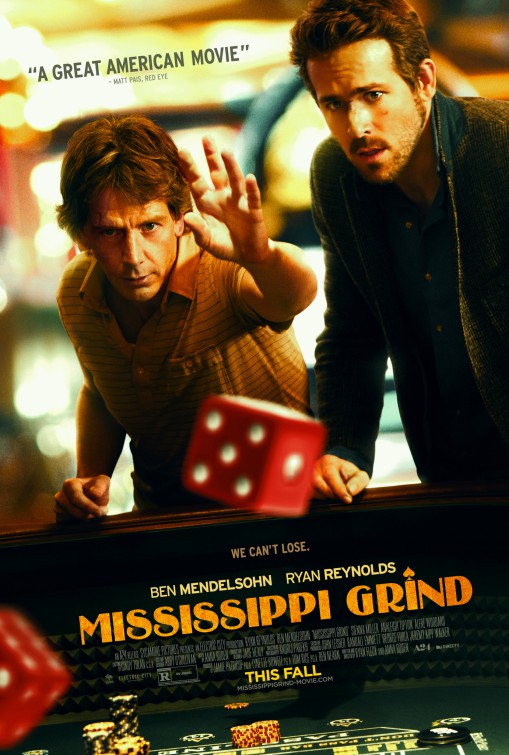