With an eye on the likes of Network and Dog Day Afternoon, Jodie Foster’s Money Monster aims to satirise the current financial climate through a hostage thriller with a sly sense of humour. While it doesn’t come close to matching its 70’s influences, this is not only a rare mid-budget, star-driven thriller – the sort Hollywood doesn’t do very often anymore – but it’s a pretty good one too.

George Clooney stars as Lee Gates, the brash host of the titular Money Monster, a financial show for people who know nothing about finance. It’s the kind of show where Gates prances on stage in a top hat with backing dancers and punctuates stocks falling with clips from cheesy old movies. “We don’t do gotcha journalism here”, Gates’ weary director Patty (Julia Roberts) opines, “Hell, we don’t do journalism, period.”

But plenty of people are sucked in by Gates’ show and the information he provides. One of those people is Kyle (Jack O’Connell), a working class twentysomething who bet his mother’s inheritance on one of Gates’ stock tips that didn’t exactly pan out. During a live broadcast, Kyle storms the stage with a gun and straps Gates into a suicide vest, demanding the cameras stay on until he gets an explanation from someone, whether that be Gates or Walt Camby (Dominic West), the evasive CEO of the company that Kyle ploughed his money into.

Of course, no-one can provide an answer as to why Kyle – and so many others – lost all of their money, and that is essentially what Foster is getting at. The financial system is so complicated and so stacked against the average, working class people that they never stand a chance and the big wigs like Camby continue to profit from it. A noble point for sure but a fairly obvious one, and the film doesn’t particularly delve much deeper into it. Instead it focuses more on the thriller elements of the plot which is really where it is most effective, with Foster keeping a rapid pace throughout to ensure the tension rarely drops.

It’s the early scenes that pack the most tension, as Kyle keeps Gates trapped on stage while Patty works with both her crew and the police to diffuse the situation. Although Kyle is the one resorting to violence, he’s the more relatable character: he’s been screwed by the system and left with nothing, and now they can’t even give him a clear explanation as to why. O’Connell, despite being saddled with an iffy Noo Yawk accent, gives a typically strong performance and Clooney does a good job at first presenting Gates as an arrogant showman before stripping away all of that bluster when he’s faced with a life or death scenario.

The standout however is Roberts who, after a similarly excellent turn in Secret in Their Eyes earlier this year, gives one of her best performances in years. We’ve seen Roberts and Clooney co-star before and the pair have a great chemistry that they rekindle here, though the actual screentime they share must be less than five minutes as the bulk of their interaction occurs via Gates’ earpiece. Roberts imbues Patty with a weary loyalty, giving the sense that she sees beneath Gates’ egotistical exterior and genuinely cares for him.

As the film progresses, almost in real time, and ventures away from the studio and out into the streets of New York City, it starts to lose its way. Though it’s largely implausible throughout, the finale does begin to stretch that too far and the eventual resolution of things is sadly all too predictable and not as satisfying as it could have been.

Nonetheless, Foster does a good job of keeping the film lean, funny and entertaining while pulling strong performances from her cast. As a smart, grown-up thriller, Money Monster is very good. As a hard-hitting expose of the financial system, it isn’t quite as sharp as it seems to set out to be. 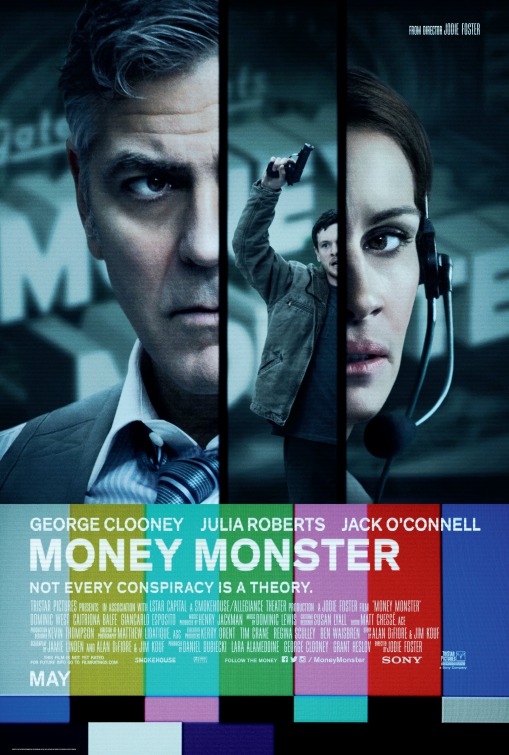