Darren Aronofsky’s mother! (the title is always stylised that way) is surely the most audacious studio film of the year, and may well be for years to come. It is closest in style to a horror film but that description doesn’t even begin to convey what Aronofsky is doing in this heavily allegorical yet deeply personal film. Even from the man behind the likes of Requiem for a Dream and Black Swan, this is a manic, dark and alienating experience that is also bold, ambitious and wildly entertaining.

At surface level, mother! is the story of a young woman (Jennifer Lawrence) who has rebuilt both the home and the life of an older poet (Javier Bardem) who lost everything in a fire. The woman – credited only as Mother – has painstakingly refurbished the rural, three story house while her husband – known only as Him – struggles with writer’s block. There’s clearly tension in their marriage from the off but things begin to unravel when a stranger (Ed Harris) and his wife (Michelle Pfeiffer) arrive and begin taking advantage of the couple’s hospitality.

The first two thirds of the film play like a nightmare for anyone with any level of social anxiety or just a general dislike of other people messing with their things. It charts Lawrence’s descent into some kind of madness as more and more guests begin to arrive and her perfect home is slowly picked apart. The unwanted guests ignore her at best, with some even harassing her in her own home while her husband doesn’t seem to understand what her problem is. With the camera constantly trained on Lawrence’s face, she conveys all of the anger, hurt, betrayal and building desperation as she loses control of the situation.

With the claustrophobic framing, heightened sound design and escalating house-guests-from-hell narrative, the film is an uncomfortable but riveting watch for its first hour or so. Once the third act arrives however, the situation in the house spirals into something indescribable and the film veers into a mix of religious and environmental allegory, plucking elements from the bible and blending them with a far more obvious Mother Earth metaphor. Swirling around this heady concoction is a highly unflattering portrait of the artist as a self-involved monster, exploiting his muse until there’s nothing left and burning it all down to start again.  That the artist in this scenario is an older man and his muse is the much younger Jennifer Lawrence adds a fascinating wrinkle to the whole thing, considering Lawrence is Aronofsky’s current beau in real life.

In that respect, mother! feels painfully personal, almost confessional, in its depiction of an artist whose desire to create is all-consuming and never sated. Bardem’s character receives complete and unconditional love from his wife but it’s never enough, he continually seeks outward approval and validation. Lawrence in many ways is playing against type as a woman so passive and subservient, who seems to exist only to make life easier for her husband and facilitate the creastion of his heart. It’s a far cry from the tough, independent characters she typically plays but it is no less a physically and emotionally demanding role, and Lawrence is outstanding here.

Aronofsky’s films are often a one-and-done experience, something so difficult and harrowing that revisiting it is just too much. Mother! is by far the most difficult and harrowing of his films. He provides little in the way of plot or character and plunges the viewer into an increasingly brutal, hysterical mess of tangled metaphors and ideas. It’s as ambitious and uncompromising as it is violent and uncomfortable; as challenging and unpleasant as it is compelling and oddly funny, and no doubt its unusual tone will alienate as many people as it delights. But above all else, mother! definitely feels like a raw, honest and fascinating look inside the mind of its creator, which is something few films can truly boast. 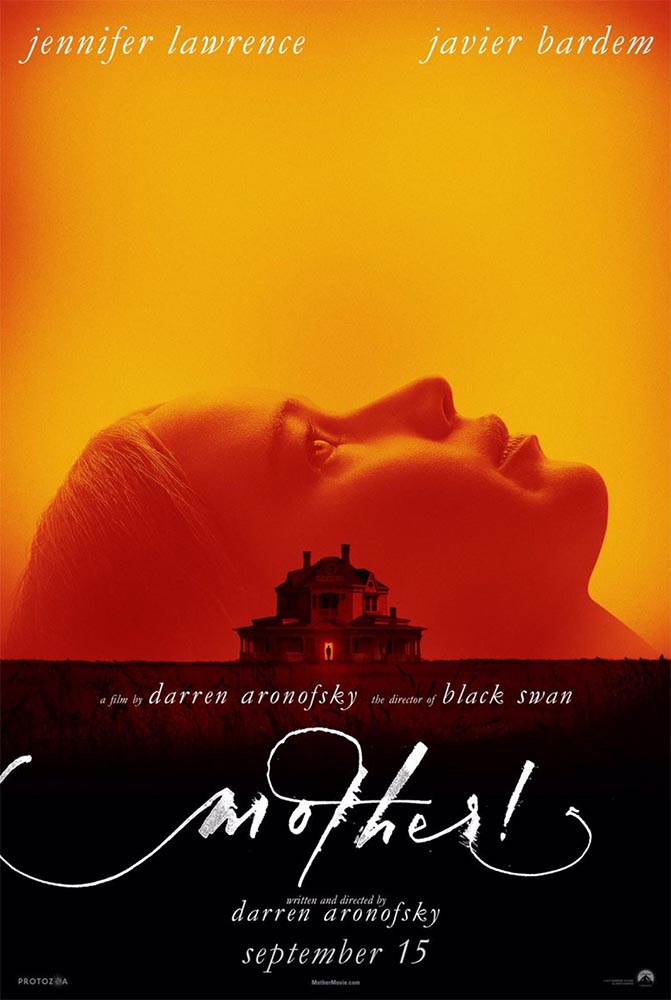