“If it bleeds, it leads”. That’s the philosophy that changes the life of Lou Bloom (Jake Gyllenhaal), the intensely driven but morally dubious figure at the centre of Dan Gilroy’s dazzling directorial debut Nightcrawler, a razor sharp and darkly funny character study that hits at the heart of both our ruthless, go-getter society and the sleazy nature of television news in one fell swoop.

Lou begins the film as a petty thief, scratching a living by stealing scrap metal and selling it back to building sites for a few bucks. He’s ambitious but lost, desperate to find his calling, a job that he can grow into. That is until he happens upon a film crew – lead by Bill Paxton’s boorish veteran Joe Loder – taping a car crash with the aim of selling the footage to the local morning news stations for a quick buck.

After stealing a bike to raise the cash for a camera and a police scanner, Lou prowls the city at night with his lowly assistant Rick (Riz Ahmed), jumping on every accident in the hope of getting some juicy footage to sell to local news producer Nina Romina (Rene Russo, in her best role in years), who tells him to “think of our newscast as a screaming woman, running down the street with her throat cut”. As the producer of the lowest-rated morning show in the area, her job is on the line and Lou’s sensational footage is the perfect antidote to dwindling viewership.

Satirising television news is nothing new but in Lou Bloom, Gilroy and Gyllenhaal have created a truly fascinating protagonist for their takedown of news ethics and self-help culture. Losing 30 pounds for the role, Gyllenhaal is gaunt and bug-eyed, haunting every frame with an insincere grin and seemingly endless supply of tacky self-help mantras. It’s clear from the beginning that Lou has no qualms about getting his hands dirty – we first see him assaulting a security guard and stealing his watch – but the film drip-feeds the levels of his depravity. Gyllenhaal’s performance is reminiscent of classic movie psychopaths like Robert De Niro’s overly genial and socially awkward psychopaths Travis Bickle and Rupert Pupkin, and Christian Bale’s murderous, status-obsessed Patrick Bateman.

After his foray into blockbuster franchise territory with Price of Persia didn’t quite work out, Gyllenhaal has had a string of strong turns in interesting films like Source Code, End of Watch and Prisoners but Nightcrawler is surely the best performance of his career and Lou Bloom is a character bound to become a cult favourite.

That Lou is able to make a success of himself says it all about the world that he inhabits. The criminal and morally repugnant acts he commits throughout the film are extreme but the whatever-it-takes attitude behind them is frighteningly recognisable in today’s society. He uses every thing of value that he has to get exactly what he wants, patiently building up a reputation at the news station until his video footage is so vital to the station and Nina’s success that he can leverage it for more money, more admiration and a more personal, yet sinister, relationship with Nina. That she goes along with it speaks volumes about her desperation and lack of options in a dwindling job market.

Desperation is a prominent trait amongst the characters in Nightcrawler and Lou exploits it wherever he can. As well as taking advantage of Nina and forcing her into a sexual relationship, Lou also exploits his assistant Rick, who is homeless with virtually no employment history when he meets Lou. Lou knows Rick has no options so can get away with paying him very little and forcing him to assist in unethical and criminal activities.

Nightcrawler doesn’t particularly hit on anything new – news is bad, people are ruthless – but it does so with so much verve and black humour that it feels fresh and endlessly entertaining. Despite the lack of any remotely likeable character, it’s still a pleasure to spend time with these people in the seedy underbelly of Los Angeles that Gilroy presents to us here in an assured debut that’s refreshingly edgy and the right kind of weird. 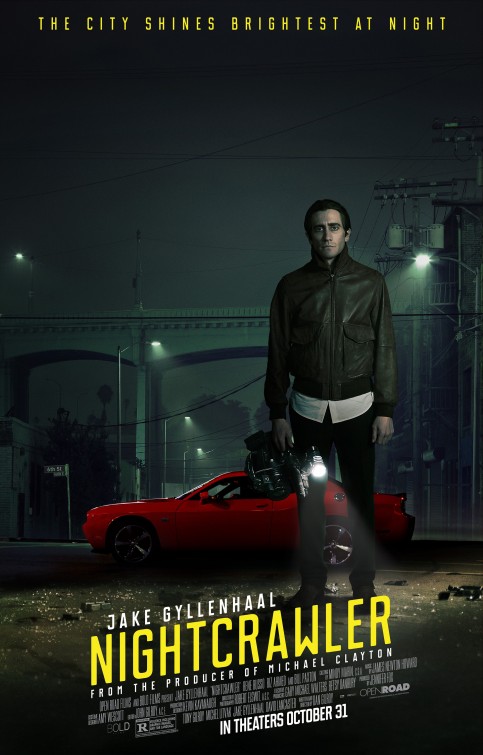