Opening with an unexpected and startling array of flesh, it’s clear from the off that with Nocturnal Animals, director Tom Ford is exploring very different territory to the warm melancholy of his debut A Single Man. Though it is equally tailored and designed to within an inch of its life, that’s where the similarities end. This is a cold, cruel psychological drama that ambitiously weaves three stories together to form one tale of love, loss, regret and revenge. It has taken Ford seven years to follow up his accomplished bow but Nocturnal Animals is well worth the wait.

Based on Austin Wright’s 1993 novel Tony and Susan, the film stars Amy Adams as Susan Morrow, an art dealer whose life hasn’t turned out how she might have imagined. She’s been successful but her career is on the decline. Her marriage is loveless, with her philandering husband (Armie Hammer) leaving her alone in their slick designer home, drinking red wine and gazing out over Los Angeles. When her ex-husband Tony (Jake Gyllenhaal) sends her the manuscript for his latest novel, Susan is forced to explore the mistakes of her past that have led to a life of regret and disappointment.

As Susan reflects on her past, we see flashbacks of her as a twentysomething, falling in love with Tony, a sensitive artistic-type who her mother (Laura Linney) deems too weak to give her daughter the life she deserves. As present-day Susan reads Tony’s manuscript, we are thrust inside her mind and see her perception of the story, with all three strands of the film adding up to paint a full picture of this relationship, from the initial passion to the nasty breakup that sent Susan and Tony down very different paths but clearly affected both of them in a huge way. Adams delivers a typically excellent performance, conveying the contrast between the young, wide-eyed Susan and the bitter woman she becomes as she drifts into middle-aged disillusionment. It’s a subtle performance – most of which involves lounging around her immaculate home reading a book – but she fully captures the tragedy of Susan’s life and invites us to empathise with a deeply unlikeable character.

Ford shoots these three story strands in distinctive ways. The past is shot in a warm, hazy glow with impressive, subtle de-aging effects giving Adams and Gyllenhaal the appearance of young twentysomethings connecting and falling for each other in New York City. It’s a stark contrast to Susan’s present life, a cold collection of sharp angles and glossy modernist interiors punctuated by bold blocks of colour. Inside Tony’s book – which he named Nocturnal Animals, a term he used to describe Susan – we’re transported to a sweaty small town in Texas for a dark, violent thriller with a dusty, earthy look that’s all grime and sweat.

These are the most gripping sections of the film as Ford crafts a thrilling neo-noir that begins when Edward and his family are run off the road by a group of rednecks, led by a frighteningly unhinged Aaron Taylor-Johnson. The specifics shouldn’t be disclosed but this sets off a heightened tale of violence and revenge, with a typically eye-popping, left-field performance from Michael Shannon as a local detective who gets involved in Edward’s life. As this story is told from Susan’s perspective, Susan sees Tony as Edward, meaning Gyllenhaal pulls double duty here. She sees his wife Laura (Isla Fisher) as someone similar to herself. Even the local characters feel like the kind of heightened versions of these people that someone from the coastal upper class would envisage.

The thriller plot would have been a compelling film on its own but when combined with the past and present sections, it all adds up to a fascinating film that continues to reveal layers beyond the confines of its running time. As the pieces fall into place and Nocturnal Animals begins to reveal itself and what it’s doing, it banishes any accusations that Ford is all style and no substance, delivering on the promise of his debut in an expected and exciting direction. 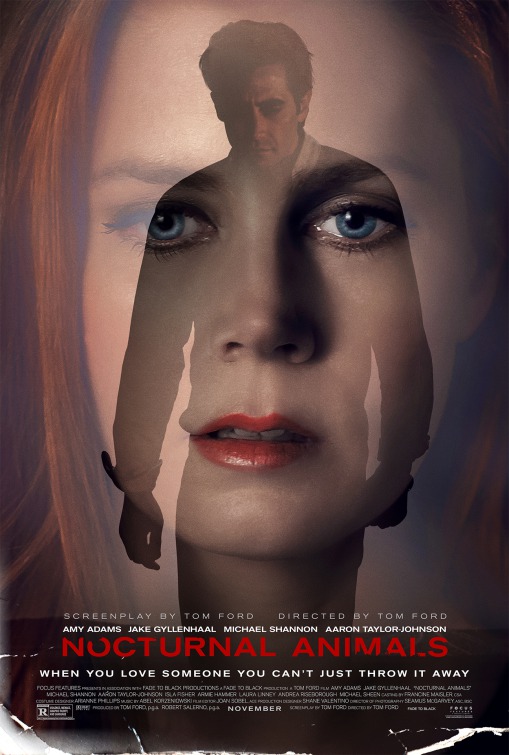