Ever since Taken handed Liam Neeson an unlikely career reinvention as a late-in-life action hero, each new film he does promises the same brand of hard-boiled silliness. The likes of Unknown, The Grey and Taken 2 have were all promoted as that kind of film, and while The Grey proved a different – and far better – animal altogether, the others have ranged from bad to unwatchable.

The latest effort is Non-Stop, a claustrophobic thriller from Unknown helmer Jaume Collet-Serra, and it proves beyond all doubt that we should just give up on Liam Neeson: Action Hero.

Neeson stars as Bill Marks, an undercover air marshal about to board a non-stop flight from New York to London. Right away, we know he’s got problems when he sits in the parking lot downing whisky before the flight. He’s no sooner aboard before his problems get worse and he receives a threatening text: if $150 million isn’t paid into an off-shore account, one passenger will die every 20 minutes until it is.

The signs are promising early on and the first act is solid, setting up an intriguing mystery but it quickly becomes bogged down with ridiculous plot twists and a tedious over-reliance on texting. Whole scenes are comprised of Neeson’s giant thumbs mashing at his phone and the resulting messages flashing up on screen, swiftly crushing any momentum the film was building.

The plot then just lurches from one ridiculous cliché to another, moving toward a finale that’s utterly predictable yet still surprising in just how cheap and mind-numbingly stupid it is. The big reveals come thick and fast and each one is more groan-inducing than the last, leading to an ending that manages to be worse than the dreck that preceded it.

Some films have a ‘so good, they’re bad’ quality that makes them an entertaining watch despite, or maybe because of, their shortcomings. Non-Stop isn’t that film. It’s just so bad it’s bad, taking itself far too seriously to be dumb-fun, instead just coming across as an overly plotted, overlong slog through standard thriller conventions. Even the action can’t get the pulse racing thanks to Collet-Serra’s choppy, shaky-cam style that helps disguise Neeson’s lack of athletic ability but also leaves you with a headache and no clue what’s going on.

Neeson is on autopilot again, going through the motions well enough but missing the appealingly cheesy one-liners of the first Taken. The supporting cast don’t fare so well, with recent Oscar winner Lupita Nyongo’o getting nothing to do and the likes of Julianne Moore, Scoot McNairy, Corey Stoll and the usually excellent Nate Parker stuck with characters both confused and confusing, flip-flopping to suit the needs of the plot.

Despite a promising start, Non-Stop quickly fritters away its potential and descends into a boring thriller that represents the nadir of Neeson’s action resurgence. All of its stupidity would’ve been halfway acceptable if it had any sense of urgency or tension but the bloated run time just leaves too much time to think about the mess that’s unfolding in front of you. 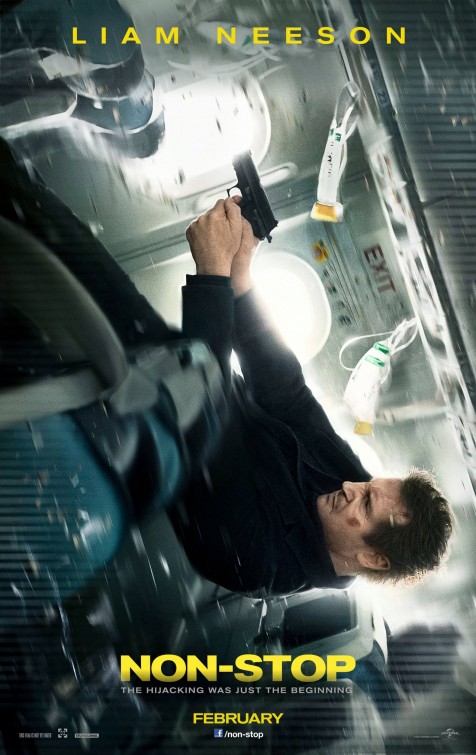