It’s refreshing to see a blockbuster of this scale based on something other than a pre-existing property but to call Oblivion an original work is something of a stretch. Directed by Tron Legacy helmer Joseph Kosinski, who first conceived the story as a graphic novel before adapting it for the screen, Oblivion borrows from pretty much every classic sci-fi you can think of but somehow manages to mash the elements into an often impressive world of its own.

The wondrous landscapes of Kosinski’s dystopian future are the film’s biggest achievement. We see sprawling landscapes, largely empty save for a few of the last remains of the world as we know it, surrounded by black sand and volcanic craters. A former architect, designer and commercials director, Kosinski clearly has a fantastic eye and it’s evident in every element of the film, from the beautiful vistas to the Apple-esque tech design and immaculate interiors.

Sadly not as much effort went into the characters inhabiting this tech-chic world. Jack Harper (Tom Cruise) is a former military veteran who now spends his days zipping around what’s left of Earth after a destructive battle with an alien race left it in ruins. The humans won but the radiation left behind is so severe that the population has fled to a massive mothership hovering in space while huge machines harvest what natural resources are left to aid their impending move to a new planet.

Based in a stylish outpost in the clouds, Jack’s job is to repair the monitoring drones and protect them from ‘scavs’, a group of seemingly alien scavengers who prowl the surface. He and his lover/colleague Victoria (Andrea Riseborough) are almost at the end of their mission when a mysterious crash turns up a few human bodies. Jack manages to rescue one of them, Julia (Olga Kurylenko), and is startled to find she’s the woman he’s been seeing in his dreams for years. Who is this woman and why does Jack feel like he knows her? These questions are answered when Jack is captured by a shady group of insurgents, lead by Beech (Morgan Freeman) who spills the beans on Jack’s real mission on Earth.

Though the cast are all capable – Cruise in particular, who has played a variation of this character numerous times – Kosinski just isn’t interested in them. The story pretty much exists as an excuse for the sleek lines and cool compositions. Any attempts at character building, an excruciating scene of Jack re-enacting a famous football game in particular, feels ham-fisted and completely unnatural amidst all the resoundingly solemn soul searching.

For a big budget blockbuster, Oblivion is admirably ambitious and full of ideas – albeit most have been pinched from better films – but it just isn’t much fun. It isn’t particularly boring either, though Kosinski’s sluggish pacing treads close to the line, it’s just there. It just exists as a mildly entertaining but forgettable sci-fi which is a shame as the raw ingredients are here for something special. As it is, Oblivion is a decent effort and a refreshing change from the same old franchises but feels sadly like a missed opportunity. 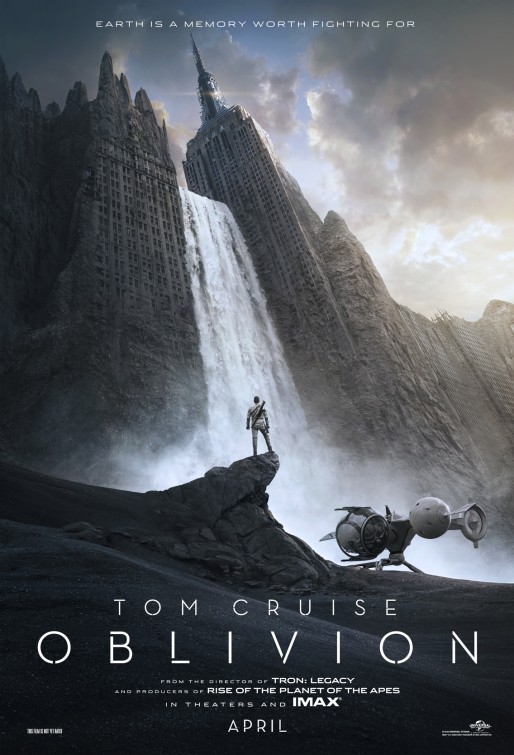