Joseph Kosinski, the talented visual stylist behind Tron: Legacy and Oblivion, swaps slick sci-fi for grounded, real-life drama with Only the Brave, the true story of a group of firefighters battling forest fires in Arizona. It’s the kind of powerful, bro-centric tale of All-American heroism that will have Peter Berg and Mark Wahlberg wondering how it got past them, so similar is it to their Lone Survivor/Deepwater Horizon/Patriots Day trifecta. Though in Kosinski’s hands, the film is a more soulful and thoughtful effort, still loaded with cliché but surprisingly restrained.

Given this is a true story, the plot details are readily available, particularly in Sean Flynn’s GQ story that inspired the film, but if you don’t know the story already, the film is better experienced fresh. It focuses on the Granite Mountain Hotshots, the first ever municipal fire crew to be certified as Hotshots, an elite rank of wild firefighters. As the film opens, Eric Marsh (Josh Brolin) and his crew are still trying to reach that level of certification, becoming increasingly frustrated at having to take a backseat to out-of-town crews. After losing a couple of guys to structural fire departments, Marsh ends up recruiting Brendan McDonough (Miles Teller), a young addict looking to turn his life around to provide for his daughter.

McDonough has the clearest arc in the film, finding a father figure in Marsh – whose past mirrors McDonough’s more than he lets on – and charting a course towards redemption. He is initially shunned by the others in the team, including Chris (Taylor Kitsch), whose hazing is especially brutal. But of course, that contempt turns to begrudging respect and, eventually, friendship as the film progresses. That kind of macho male friendship is at the centre of the film, with these muscle-bound, mustachioed bros razzing and pranking each other like a group of overgrown frat-boys. As insufferable as that sounds, the undercurrent of genuine love and comradery amongst the group makes their testosterone-fuelled bluster actually endearing. Teller gives a relaxed, naturalistic performance, ably conveying McDonough’s determination to stay on the right track and hold things together. He shares a compelling chemistry with Kitsch, who gives a potent reminder of how charming he can be in the right role.

In amongst this male-heavy environment, the only female character with any kind of depth is Eric’s wife Amanda (Jennifer Connelly). Very much in the mould of the typical long-suffering but endlessly supportive movie wife, Connolly makes the underwritten character feel more like an actual human being and the depth of feeling between Amanda and Eric is palpable. Brolin’s performance is also strong, portraying a man who, fuelled by past mistakes, has poured all of his focus into becoming a certified Hotshot and protecting his town and the surrounding woodlands. Brolin is somewhat let down by a script that dumps him with a number of cod-philosophical monologues as he stares off into the distance, watching fire rip through the forest and trying to suss out its path.

Where other films might be tempted to insert an evil bureaucrat or some kind of human antagonist, the script here – by Ken Nolan and Eric Warren Singer – doesn’t bother with that kind of contrivance. The focus is on the interpersonal, human drama between the characters and the villain of the piece is the constant threat provided by the fire. The film’s timeline is slightly jumpy, shifting forward months at a time so the frequency of the fire is never entirely clear but Kosinski shoots the flames in a way that conveys their full power. We see entire forests engulfed in flame and small towns ravaged by wild fire, so the threat always feels real and no matter what else is going on in the film, there’s always the sense that disaster is right around the corner.

It’s been a while since Kosinski was last behind the camera but his return with Only the Brave, an unlikely choice for him, proves that he is a director with a great visual eye and some real versatility. At two-and-a-quarter hours long, the film is a little meandering and sluggish at times but the strong performances at its centre keep things compelling as the film heads towards its moving finale. Adapting a true story of this nature can always be precarious, running the risk of misrepresenting the people involved or overegging the drama but Kosinski’s film treats its subject matter and its characters with respect and sincerity, finding heart and inspiration in the incredible bravery of these men. 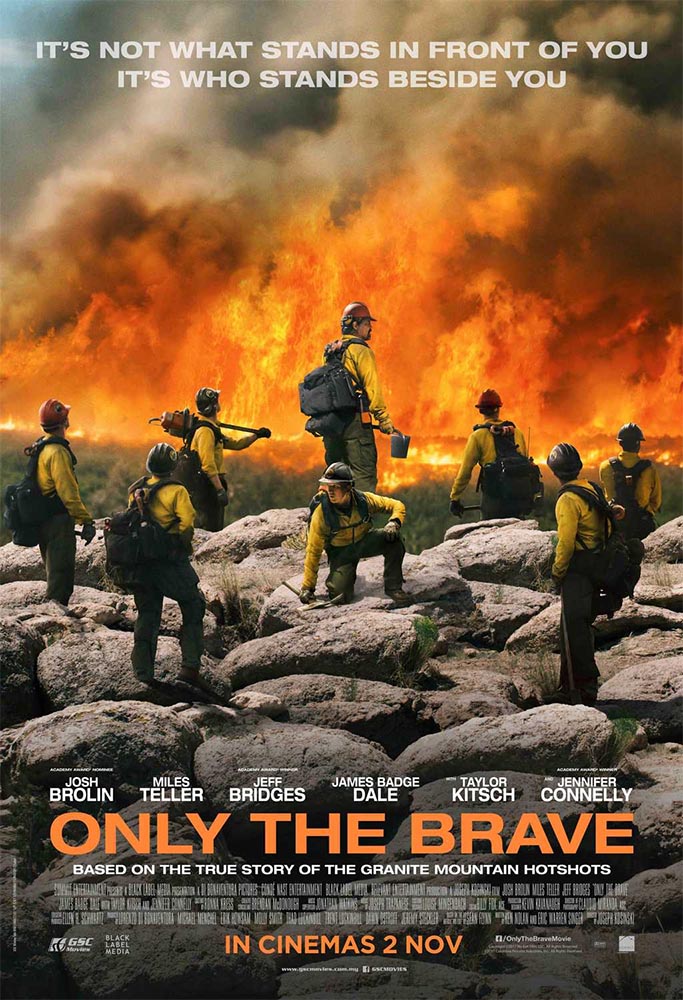