Back in 2014, Ouija somehow made it to over $100 million worldwide despite being a limp, cliché ridden and unimaginative slice of wishy-washy PG13 horror. In a world where we have studio horrors as good as James Wan’s Insidious and The Conjuring franchises, something as inept as Ouija just doesn’t cut it. It seems Blumhouse – the production house that specialises in low-budget/high profit horror flicks – knows that too and enlisted Mike Flanagan, the smart director behind the likes of Oculus and Hush, to rejuvenate this series with a prequel that banishes the spirit of its predecessor, while summoning the kind of slick mainstream scares that Wan has made the new standard.

The film jumps back to the ‘60s to tell the story of the Zander family, and what lead them to eventually torment the residents of their former home in the previous Ouija instalment. Mom Alice (Elizabeth Reaser) is a professional medium, using every trick in the book to make clients believe she’s talking to their deceased loved ones. When she catches her teenage daughter Lina (Annalise Basso) and her friends playing with a Ouija board, she spots a new angle to swindle her customers and gets a Ouija board of her own, using magnets to make it look like the planchette is moving of its own accord. However, when pre-teen daughter Doris (Lulu Wilson) plays with the board, strange things start to happen and it appears she might be summoning the spirit of her late father.

What ensues is a canny blend of haunted house and exorcism movie tropes, spun into an inventive and genuinely surprising horror. There isn’t a whole lot here that hasn’t been done before but Flanagan puts a neat twist on the well-worn clichés, conjuring up some horrifying imagery and well-earned scares of his own. He has a deceptively difficult juggling act to pull off here, having to tie in the product placement – Ouija is a Hasbro board game, apparently – and make sure the outcome of this story lines up with the one told in the last film, for the few who actually remember it. Along with co-writer Jeff Howard, Flanagan does all that and more, though if Ouija board action is a big draw for you, you might be left disappointed here; though it sets the plot in motion, any reference to the titular game could be removed and the film would essentially be the same.

At the centre of the film is an astonishing performance from young Lulu Wilson, who creates one of the most memorable Creepy Child performances in a long time. She transforms from an ordinary, sweet little girl into something far more sinister as the house’s demonic occupants begin to get a grip of her. Like the rest of the film, her transformation is slow and considered, going from speaking to herself and writing in fluent Polish, to explaining in excruciating detail how it feels to be strangled to death, to eventually crawling the walls and unleashing a full-on Exorcist-style scream that floors anyone in its path. As with most horrors, the film begins to wobble as it reaches its climax, revealing a backstory for the malevolent spirits that feels overly convoluted, containing enough material to inspire another prequel.

But Flanagan’s commitment to smart, hard-earned scares and meticulous attention to period detail – going so far as to add burns and scratches to the film as if it were genuinely an old film reel – makes Ouija: Origin of Evil a far better film than it ever needed to be. It also works entirely on its own merits, so there’s no need to see the frankly dreadful first film before entering Flanagan’s retro house of horrors. 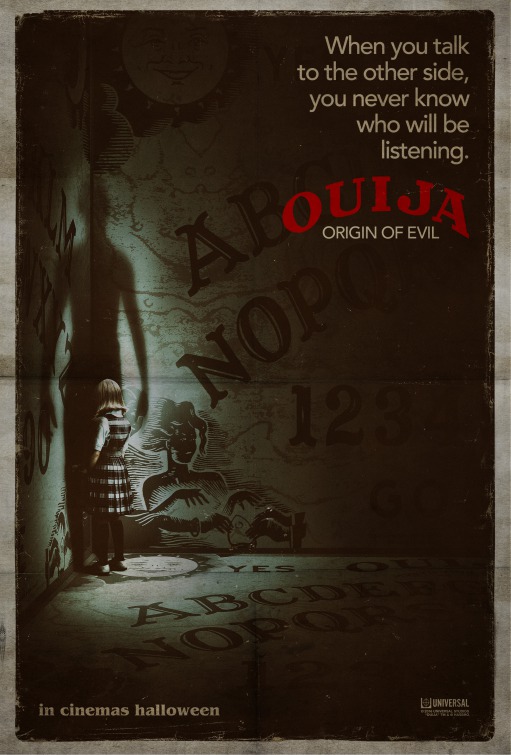