Pain & Gain was supposed to be Michael Bay’s ‘small’ movie, a break from the huge blockbusters he’s been churning out since the late 90’s. Compared to his recent oeuvre, it’s certainly a smaller film but with a $30 million budget and the star wattage of Mark Wahlberg and Dwayne Johnson, it’s hardly an intimate, personal affair. It does however skew closer to Bay’s 1995 debut film Bad Boys – and a case could be made for it being his best movie since then – but make no mistake, this is still a big, overblown and unbearably stupid film that’s unmistakably a Michael Bay picture.

Based on a New Times article about the heinous crimes of a group of meathead body builders, the film follows Daniel Lugo (Wahlberg), an employee at Sun Gym who has recently done a stint in jail for white collar crimes. Lugo believes in the American dream but doesn’t really have the skills, brainpower or work ethic to make anything happen for himself. That is until he hatches a plan to rob the repulsive Victor Kershaw (Tony Shalhoub), a local sandwich mogul who recently became a client. Lugo enlists the help of his steroid-ridden colleague Adrian (Anthony Mackie) and ex-con Paul (Johnson) to kidnap Kershaw and bleed him dry of all his assets.

Ludicrously dressed as muscle-bound ninjas, guys taser Kershaw and bundle him into the back of their van, taking him to a sex-toy warehouse where he’s tied and tortured until they legally acquire all of his money and possessions, leaving him flat broke.

There’s the potential for a good film here. Wahlberg, Johnson and Mackie are perfectly cast as the muscle-bound dimwits bumbling their way through a series of ill-conceived criminal plots. The only problem is, Bay wildly misjudges pretty much every aspect of the film. He makes a huge deal of how this is a true story – with captions appearing throughout the film to remind us it’s all still true – yet handles the material in the most insensitive way possible. The people involved in this ordeal are mostly all still alive, yet Bay presents the horrible events that befall them for broad laughs and asks us to sympathise with three deeply unlikable characters.

Bay tries to justify the kidnapping and torture of Kershaw by making him an asshole. Yes, he’s a disgusting sleazeball, laring at girls by the pool and condescending Lugo at every opportunity but so what? Bay and his screenwriters seem to think making Kershaw completely reprehensible somehow excuses what Lugo and his cronies are doing to him, yet Kershaw is still a legitimate businessman who made his own fortune. Just because he’s a bit of a shit doesn’t make it acceptable to rob and torture him.

The film only serves to get more unpleasant as the guys find another mark and get involved in another badly botched robbery that once again is played for dark humour, with a recently deceased female character in particular being badly degraded and humiliated. The only other female characters in the film are Sorina (Bar Paly), an Eastern Euro stripper/hooker who serves little to no purpose other than to prance around in various states of undress while Rebel Wilson appears as Adrian’s love interest and one of the only likable characters in the film, though she’s given nothing to do either.

The cast aren’t at fault here as everyone on screen does what they can with what they’re given. Johnson in particular gives a good comic turn the naïve and dim-witted kidnapper-with-a-conscience. It’s through the strength of the cast that the film’s first half is actually relatively entertaining, the main trio even managing to ring some laughs from the material despite Bay’s notorious tin-ear for comedy.

If this is Bay’s stab at satirising the American dream, he’s fallen far short and it’s even more apparent just how thick-headed Pain & Gain is in a year where we’ve already seen filmmakers as talented as Sofia Coppolla and Harmony Korine take a shot at similar subject matter with The Bling Ring and Spring Breakers respectively.

If it wasn’t for the admittedly impressive aesthetic and an appealing cast, there would be absolutely nothing to recommend this bloated, objectionable film that’s as big, muscular and idiotic as its main character. 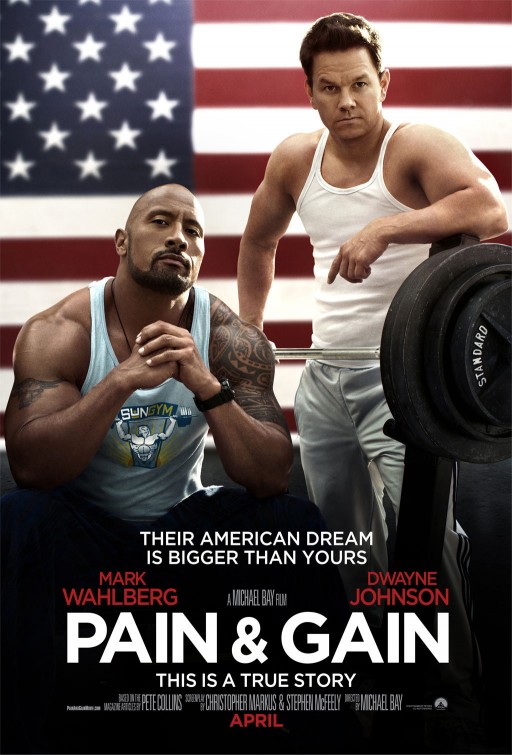