In the vein of so many recent comedy sequels, Pitch Perfect 2, the sequel to 2012’s surprisingly joyous a capella comedy hit Pitch Perfect, clearly knows what worked about its predecessor and sets out to replicate that. It’s often successful, avoiding many of the pitfalls of copy-and-paste sequels that plagued the likes of The Hangover 2, but at times tries to give us too much of what we liked and ups the ante more than it needs to.

The fairly simple premise of the first film – too-cool-for-school Becca (Anna Kendrick) enlivens a stuffy college a capella group – has been replaced by a messier tangle of subplots and fan service. The main thread of the narrative involves Becca and her Barden Bellas trying to win the a capella world championships after a spectacular wardrobe malfunction in front of President Obama sees them banned from the national competition.

Their main competition is a slick German group called Das Sound Machine, led by Kommissar (Birgitte Hjort Sorenson). The Germans are so perfect Becca can’t even bring herself to insult them; any attempt at smack-talk results in an aggressively delivered compliment.

But while Becca’s band members – including obsessive veteran Chloe (Brittany Snow), irreverent Aussie Fat Amy (Rebel Wilson) and a ca-newbie Emily (Hailee Steinfeld) – are all firmly focussed on the Bellas, Becca herself is more interested in her internship at a record label and trying to secure a career in music after graduation.

Meanwhile there are half-baked romantic subplots between Emily and nerdy magician/singer Benji (), and Fat Amy and Bumper (Adam DeVine), a coupling that played better as a couple of throwaway gags in the first film. Here it feels like a reason to cram in more of Fat Amy, which makes sense since Wilson was the breakout star but the character works better in small doses, stealing scenes rather than being the focus of them.

Plot-wise, the most interesting scenes are at Becca’s job. Comedian Keegan Michael Key gives a brilliant turn as her abusive record producer boss and Snoop Dogg is on hand to cameo as himself, recording a Christmas album no less. It’s almost a shame the film wasn’t more focussed on Becca’s situation – her job, her relationship with Jesse (Skylar Astin), who is almost entirely sidelined here – rather than the Bellas more formulaic plot which takes up most of the screen time.

Nonetheless, there’s still plenty of joy to be had in the slickly produced a capella numbers from the Bellas and in particular Das Sound Machine, who deliver impressive renditions of Muse’s Uprising and Fall Out Boy’s My Songs Know What You Did in the Dark. The song choices overall could have been better – why Jesse’s group The Treblemakers kick off with Mika’s Lollipop is anyone’s guess – but the performances are fizzy and energetic enough to keep the scenes enjoyable enough.

Though not as sharp or snarky as they could’ve been, there are still plenty of jokes and comic set pieces that work well. Most of the laughs come from the quips and banter back and forth between the Bellas, scene-stealing cameos from Key and a lisping David Cross, or the offbeat running commentary from a capella bigwigs played by John Michael Higgins and the film’s producer and director Elizabeth Banks. Less successful is Rebel Wilson’s extended solo or the steady stream of oddly racist jokes centred on Chrissie Fit’s Guatemalan character.

As with most comedy sequels, the insistence on beefing up the aspects of the first that people liked the most hinders Pitch Perfect 2 and of course the surprise element has gone so it suffers from the weight of expectations that the first film never had. However, it’s still a lot of fun. These are charming characters played by likeable, talented actors so spending time with them is never difficult, even at the film’s ropier moments. A third instalment might be stretching it – though box office hauls suggest that won’t be too far away – but there’s enough a ca-enjoyment to be had here. 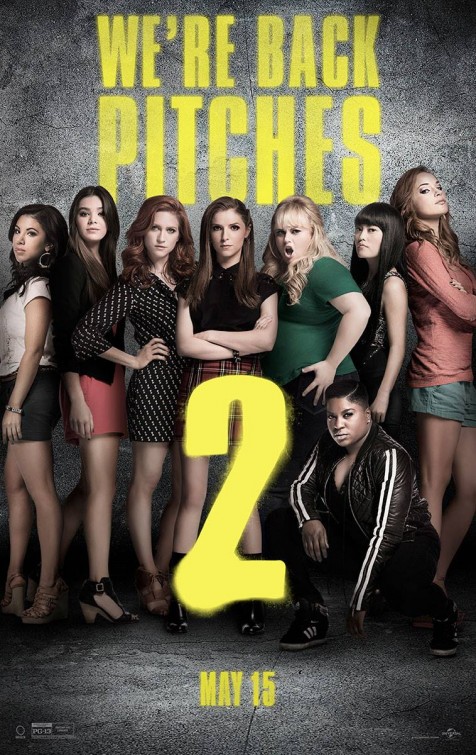