Much like beloved classic This Is Spinal Tap – the granddaddy of music mockumentaries – skewered the inherent silliness of eighties metal bands, Popstar: Never Stop Never Stopping takes aim at the current pop rap scene and celebrity culture in general. This spot on parody comes courtesy of The Lonely Island, the fake rap group/comedy troupe consisting of Andy Samberg, Jorma Taccone and Akiva Schaffer, who rose to prominence via their Saturday Night Live digital shorts that both enlivened the flagging comedy series and helped put YouTube on the map.

The trio share creative duties here, with Taccone and Schaffer directing and all three writing and appearing in the film. Samberg stars as Conner4Real, a popstar who found fame in a boy band named the Style Boyz before branching out and finding huge success on his own. Though fellow Style Boy Owen (Taccone) stuck around as Conner’s DJ – pressing play on an iPod at the start of every gig – we learn that Lawrence (Schaffer), the third member, has retreated from the music business and started a farm.

The film is essentially the story of Conner’s spectacular fall – and inevitable rise back to – stardom, with the documentary following Conner as he launches his sophomore album and embarks on a world tour. The album is a failure – the only positive review comes from The Onion – and the world tour is equally disastrous, with Conner’s ill-conceived on-stage antics and a tabloid romance with actress Ashley Wednesday (Imogen Poots) turning him into fodder for a group of cackling loons at TMZ stand-in CMZ. Before long, both his fans and entourage abandon him, leading Conner to patch up some old relationships for a shot at redemption.

Though the arc is largely conventional and the film somewhat struggles to maintain its mockumentary style, the Lonely Island boys do a great job of transporting the joyously silly but often spot-on satire of their songs and sketches onto the big screen. It most obviously resembles the Justin Beiber tour doc Never Stop Believing – and Conner is clearly based on Beiber to an extent – but the film’s aim is wider. It does poke fun at specific artists with songs like the Macklemore-aping “Equal Rights” in which Conner demands equality for all while affirming his own heterosexuality. But the main target is millennial celebrity culture in general and Conner’s life essentially embodies all that is wrong with that fame-obsessed world, from faux-activism to social media oversharing and best of all, the CMZ newsroom where Will Arnett, Eric Andre, Chelsea Perretti and Mike Birbiglia laugh maniacally and down ever-expanding big gulps.

What’s striking about it all is that none of it ever feels mean spirited, either towards the fictional characters or those the film is sending up. Samberg has a loveable, puppy dog quality to him that ensures that Conner’s actions are done out of stupidity rather than malice. There’s even an impressive cavalcade of music stars on hand as talking heads, including the likes of Ringo Starr, Questlove, Nas, Pharrell, RZA and Mariah Carey, who is willing to poke fun at her own persona for declaring her love for Conner’s humblebrag anthem “I’m So Humble”.

Whether it goes on to achieve the enduring cult status of This Is Spinal Tap or largely fades away like the criminally underappreciated musical biopic spoof Walk Hard remains to be seen. Regardless, Popstar: Never Stop Never Stopping is a brilliantly funny mockumentary that punctures pop music and celebrity in a time where it has never been more ripe for parody and provides a perfect big screen vehicle for Samberg, Taccone and Schaffer’s brand of silly/smart humour. 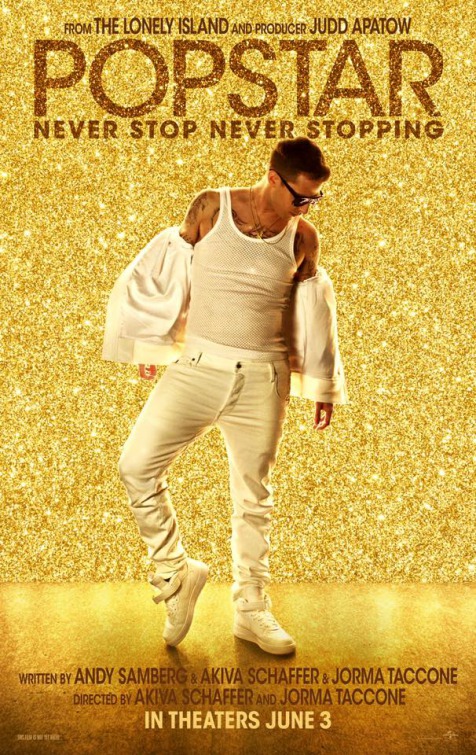