With The Dark Knight Rises exposing Joseph Gordon-Levitt to anyone who missed him in the likes of Brick, 500 Days of Summer or even Inception, 2012 is a huge year for the actor. Still to come this autumn is Rian Johnson’s inventive sci-fi Looper but for now, Levitt changes gear for Premium Rush, a brisk and amiable thriller that might not aid Levitt’s rise to stardom but certainly won’t hamper it either.

Levitt plays Wilee (as in ‘Coyote’), a New York City bike messenger who gave up on a law degree to bob and weave in and out of traffic on his ‘fixie’, a single gear, steel frame bike with no brakes. Director David Koepp does a great job of tracking Wilee and his colleagues throughout NYC using some clever visual tricks, including GPS-style maps or what-if? scenarios in Wilee’s head as he weighs up his various different paths at busy junctions, often to hilarious results.

Koepp also effectively keeps the narrative moving by toying with the chronology, spicing up a fairly pedestrian plot as Wilee tries to deliver a gravely important envelope from a university student to Chinatown on a tight deadline. The envelope is also coveted by bumbling nutjob Bobby Monday (Michael Shannon), a corrupt NYPD detective who is chasing Wilee across town.

The contents of the envelope are a let down and lead to ham-fisted revelations in an otherwise light-hearted film but it doesn’t detract from the fun of watching Wilee evade Shannon’s manic Monday, continually embarrass an earnest bike-cop and race Manny (Wale Parks), a ‘roided up bike messenger with ideas of stealing his girlfriend Vanessa (Dania Ramirez).

Levitt again is an immensely likeable screen presence and even throughout all the cartoon action and cheesy rebellious wisecracks – “Runin’ reds, killin’ peds” – he’s never less than credible.

Michael Shannon steals the film though, going for a different kind of crazy than his usual intense, bug eyed performances. Here he is increasingly desperate and pathetic as Wilee gives him the run-around, bagging the majority of the movie’s best lines and biggest laughs. However, it would’ve been easy to make Monday a complete moron and although he does make a lot of mistakes along the way, he never feels like an idiot.

Impressively, Koepp avoids digital effects for the majority of the action which grounds even the craziest of scenes in some vague reality, employing a really talented crew of stunt riders to bring the cycle scenes to life. Even Levitt paid his stunt dues, busting himself up pretty badly during a stunt as shown during the end credits.

Premium Rush is an unexpected gem, a clever thriller that, in a world of weighty, solemn and gloomy action movies isn’t afraid to be a lot of fun. Every character is enjoyable in their own way and while they maybe aren’t the deepest portrayals you’ll see on screen this year, none are lazily written. The movie flies by at a trim 90 minutes and never slows down enough to bore. It may be slight and forgettable but it’s light, breezy thrills and game cast make it one of the year’s most likeable movies. 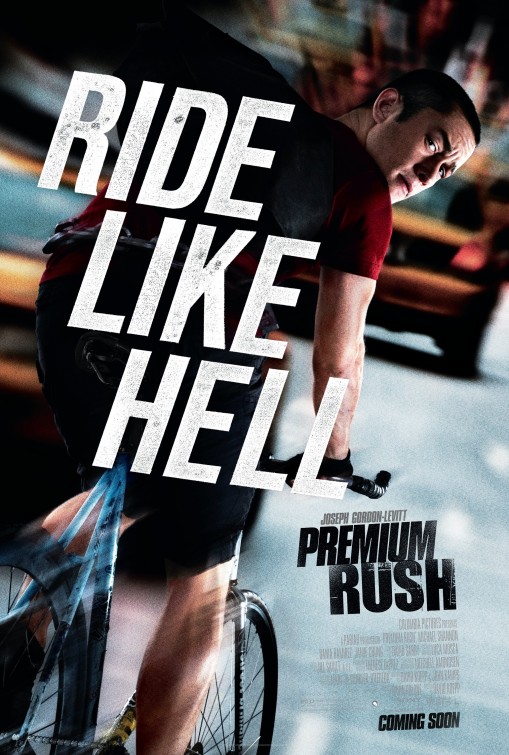