After his 2010 film Incendies scored an Oscar nomination, Quebecois director Denis Villeneuve makes the shift to Hollywood for Prisoners, a taut thriller that blends some weighty moral themes into a compelling and densely plotted mystery that’s enlivened by an excellent cast.

Hugh Jackman gives one of his best performances as Keller Dover, a Pennsylvania carpenter whose six-year-old daughter and her friend go missing on Thanksgiving afternoon. The police, lead by skilled but seemingly troubled Detective Loki (Jake Gyllenhaal), begin a grand scale hunt for the girls and their potential kidnappers, starting with Alex Jones (Paul Dano). Alex appears to have the mental capacity of a 10-year-old but does he know more than he’s letting on?

Keller in particular is certain he does and when the police can’t charge Alex, he takes matters into his own hands, doling out some brutal justice on Alex in an attempt to find out what he knows.

The film drip-feeds its mystery slowly and deliberately, reminiscent of David Fincher’s Zodiac, with Loki’s search for the girls turning up more mysteries along the way, which may or may not be connected to the main case he’s trying to crack. Why does a priest have a mouldy corpse in his basement and how is that connected to a young man who buys kid’s clothes from a local bargain mall? Loki works through all of these clues – some relevant, some red herrings – with a world-weariness you’d expect from someone a lot older.

Covered in home-made tattoos and often twitching with some kind of nervous energy, Gyllenhaal makes Loki a compelling character, suggesting a lot of history that the film wisely never touches on. It gives the character a lived-in feel, like this is someone who exists outside of the run-time of the film.

The film itself is similarly textured and Villeneuve, aided by Roger Deakins’ superb cinematography, creates a almost unbearable sense of dread that doesn’t let up, even long after the film has finished. The grey skies and seemingly never-ending drizzle loom over proceedings, adding to the relentlessly dour mood. The tension is palpable too, with almost every scene raising new questions with potentially very disturbing answers.

Many films completely fall apart when their mystery is revealed. Prisoners doesn’t quite go that far but it certainly wobbles near the finale, with characters making decisions that feel more like plot service than an organic choice. Some of the plot twists and turns also veer into implausibility towards the end and feel like Villeneuve is just trying to hammer home the film’s main theme – we’re all prisoners in some way, whether it is literally or figuratively – despite it already being clear throughout.

While Jackman and Gyllenhaal are fantastic, the role for the supporting cast are hit and miss. Paul Dano is almost too well cast, his very appearance making his character’s guilt a foregone conclusion. Elsewhere, talented actors are wasted in underwritten roles: Terrence Howard and Viola Davis as the other missing girls family pretty much go missing half way through and Maria Bello as Keller’s wife Grace, who spends much of the film in an almost catatonic state.

Despite these minor gripes, Prisoners is a rich and extremely well crafted thriller with excellent performances and an overwhelming sense of foreboding that means it isn’t exactly an easy watch but is certainly a rewarding one. 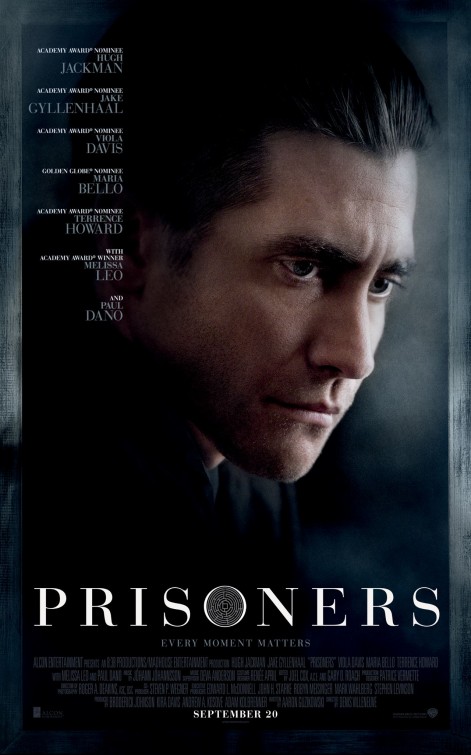