Much like its characters that are left on Earth to contend with locust plagues and the obnoxious antichrist, Rapture-Palooza seems to have been left out of the apocalyptic comedy rapture that saw its higher-profile cousins sucked into the cinematic heavens. While This Is the End and The World’s End earned solid box office returns in theatres this year, Rapture-Palooza snuck onto home video with a surprising lack of fanfare given the talent involved.

Anna Kendrick stars as Lindsey, one of the poor heathens left to suffer the post-apocalyptic world with her father and teen stoner brother. At least she has boyfriend Ben (John Francis Daley), whose father (Rob Corrdry) has sold his soul and now works for the antichrist himself, a crude and repulsive psychopath who likes to call himself the Beast (Craig Robinson).

When the Beast crosses paths with Lindsey, he immediately develops a strong and creepy crush on her and is determined to win her away from Ben. Of course, she isn’t interested but considering the other option is everyone she knows dying a horrible death, she goes along with it while secretly plotting a way to kill him.

While the story bears similarities to This Is the End and the foul-mouthed humour is along the same lines, the tone is probably closer to Zombieland with the emphasis on the daily pitfalls of living in an apocalyptic world. The characters wearily accept everyday occurrences like bloody downpours and huge chunks of rock occasionally falling out of the sky, with an appealingly dry wit. Kendrick in particular nails these scenes, her comic chops perfectly suited to the deadpan humour.

Robinson goes the other way, making the antichrist as big and loud as possible, sporting a variety of brightly coloured suits and chatting up Kendrick’s Lindsey with lines filthy enough to embarrass a porn star. His massive performance is a nice counterpoint to Kendrick and the comedic chemistry between the two provides the film with a good centre. Swirling around those two is an astoundingly strong supporting cast, featuring a number of the most consistent supporting players in comedy: Rob Corrdry, Ken Jeong, Tyler Labine, Paul Scheer, John Michael Higgins, Rob Huebel and Ana Gasteyer all crop up in roles of varying sizes. Thomas Lennon in particular gives a great turn as Kendrick’s neighbour who doesn’t realise he’s a zombie.

It’s a surprise then that Rapture-Palooza just doesn’t hang together as well as it should. The jokes fall back on the obvious punchlines far too often, which is a huge disappointment with a cast as talented as this. There are some funny lines but never anything funny enough to elicit a belly laugh, nevermind being memorable five minutes after it’s gone by. Perhaps it’s just the weight of expectation that comes with players as gifted as these but the script by Bill & Ted scribe Chris Matheson seemingly doesn’t give them enough to work with.

Sadly, the whole is less than the sum of its comedic parts. 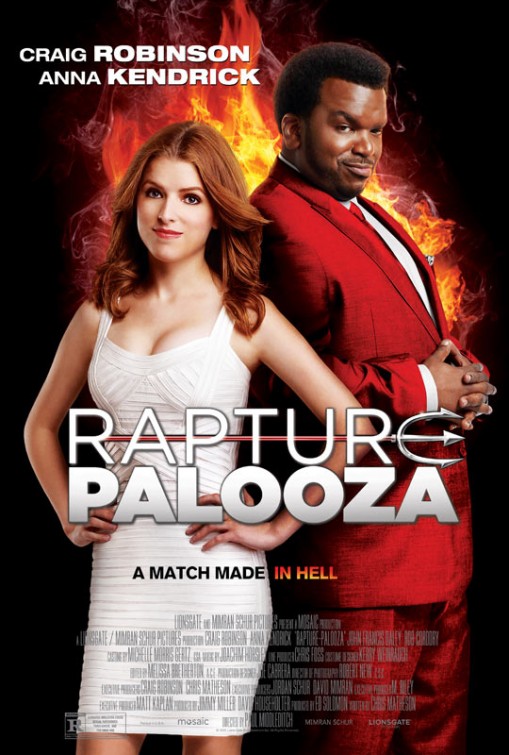